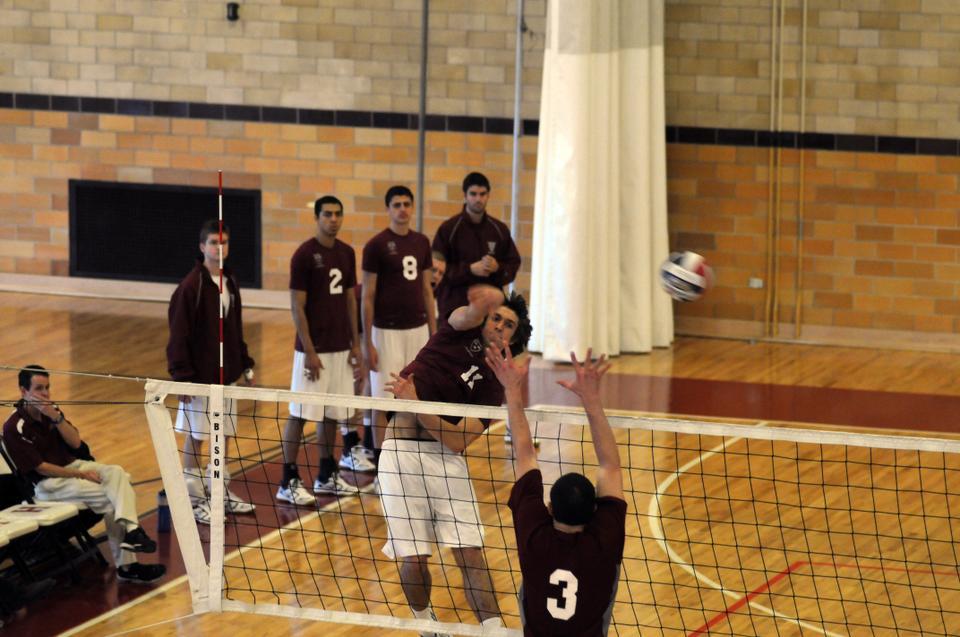 Co-captain outside hitter Matt Jones, shown here in earlier action, led the Crimson with 32 points and 23 kills in a victory over Cal Baptist last night. Harvard (5-0) is off to its best start since 1993, and begins Conference play, at home, against George Mason on Friday.
By Claire K. Dailey, Contributing Writer

Off to its best start in two decades, the Harvard men’s volleyball team, led by co-captain and California native Matt Jones, appeared ready to take on the fast-paced offense of west coast rival Cal Baptist at the Malkin Athletic Center on Wednesday night.

With the match tied at one game apiece, boths teams had the opportunity to take the momentum in the third frame. But despite the powerful hitting of the Lancers (2-8), the Crimson (5-0) was able to overcome and take the match, 3-1.

Harvard jumped out to a 9-3 lead after two service aces from Jones. But Cal Baptist junior outside hitter Aaron McCalmont was able to bring the visitors back into the match, trading kills with Jones.

Following a set of kills from the Lancers, the Crimson called a timeout with the lead at 21-20.

Both teams came out of the break with huge hits and digs, leading to the longest rally of the game. Cal Baptist took the point for a net violation by Harvard–which was contested by the Crimson–tying the score 22-22.

But Harvard fought back, with freshman outside hitter D.J. White notching two kills to put the Crimson at game point.

Drawn out with a lot of net play, the final rally was won with a kill from freshman middle hitter Caleb Zimmick, putting Harvard up 2-1 and giving them momentum to take the match in four games.

“I’m most impressed by our confidence and patience out there,” Crimson coach Brian Baise said. “We’re unflappable most of the time, we don’t let things bother us.”

The match began with both teams trading kills back and forth, but missed serves on both sides kept the game knotted.

A kill and a service ace by Zimmick– followed by a kill from Jones–began Harvard’s attempt to pull away at 17-14.

“I think what helped us was our ability to serve and keep them out of system, so they weren’t able to keep [their] offense super fast,” Jones said. “That’s when we were able to pick up points on them.”

The Crimson ended the first set on a 5-0 run set up by kills from Jones and sophomore outside hitter Nick Madden.

The Harvard defense was put to the test in the second frame. The Lancers’ freshman outside hitter Corey Bates knocked down four kills on the Crimson early in the set.

A string of missed serves caused a Harvard timeout with Cal Baptist ahead, 19-15. The Crimson was unable to recover after a service ace from the Lancers and a cross-court kill from McCalmont, dropping the game, 25-19.

With the match tied, 1-1, Harvard came into the third frame with strong serves and consistent passing.

“We focused on our side of the net.” Zimmick said. “We knew that if we made more serves and if we passed better, we would be fine.”

Both squads were able to set up hitting attacks well–producing 55 kills apiece for the entire match.

Winning the third match was a huge momentum shift in the game, as the hosts’ defense withstood the powerful hitting of the Lancers to go up, 2-1.

The fourth set began with two service aces from Jones–adding to the Crimson’s total of 10 service aces for the match– and adding to Harvard’s momentum.

“As the match went on, we started getting more touches, more hands,” Jones said. “I think we started to read a little better [and] get a jump on the tempo.”

Following service errors on both sides, the Crimson was able to go on a 5-0 run. Led by strong blocking from Zimmick and four more kills from Jones, Harvard forced a Cal Baptist timeout with the score at 14-8.

The Crimson came out of the time out even stronger than its opponent. With three more kills from White. Harvard ended the frame with a six point run, winning 25-19, and 3-1 overall.

And with the win, the Crimson ride into conference play coming off the tails of its best win in two years, according to Jones.

“I just thought mentally, we were really strong,” Baise said. “They were kind of able to take control of that second game, but coming back in the third and again in the fourth shows a lot of maturity [and] a lot of confidence,” Blaise said.