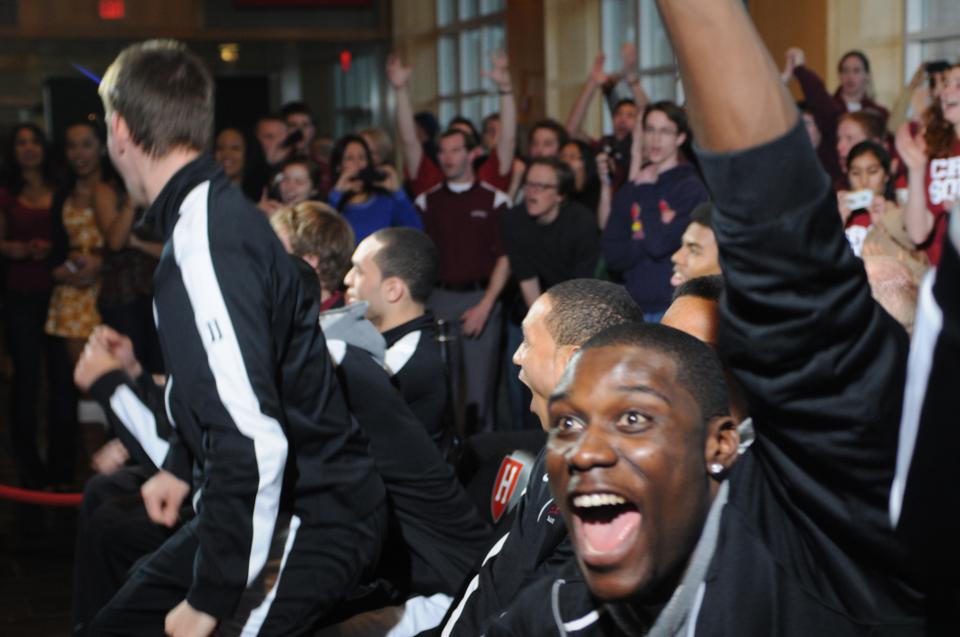 The Harvard men's basketball celebrates after the announcement of its NCAA tournament seeding at the Murr Center Sunday evening.
By Catherine E. Coppinger, Crimson Staff Writer

It’s almost time to dance. And as of Sunday night, the Harvard men’s basketball team finally knows where.

The Crimson is the 12th seed in the East Regional of the NCAA tournament and will face No. 5 seed Vanderbilt on Thursday in Albuquerque, N.M.

"We're thrilled to represent our conference, our university, and certainly our program and to do the best we can," Harvard coach Tommy Amaker said. "We're excited to put ourselves in this position and we're certainly hoping for the best. We know this great tournament is going to be as sensational as it has always been with a number of incredible games."

The Crimson—which will play in its first NCAA tournament since 1946—comes into the game on the tail of a big two-game sweep of Columbia and Cornell in the team’s final Ancient Eight games of the year.

But Harvard did not know for sure it would make it to the Big Dance until Princeton knocked off Penn Tuesday night, eliminating the possibility of a playoff between the Quakers and the Crimson to determine which team would claim the Ivy League’s automatic bid. With the Tigers’ win, Harvard earned its first outright Ancient Eight title in school history—and along with it, a chance to dance.

Because the Ivy League doesn’t have a conference tournament at the end of the season, Harvard was among the first teams to punch a ticket to the NCAA tournament. And the Crimson players feel they are ready to take on upcoming challenges in Albuquerque.

“This is the reason that all of us came here,” said junior forward Kyle Casey, who was recently tabbed to the All-Ivy first team. “It’s been a long three years—and four years for [co-captains Keith Wright and Oliver McNally].... There have been a lot of ups and downs, but it’s nice to see the hard work paying off.”

"[This is] surreal,” Wright echoed. “It’s hard work paying off.... To be able to celebrate with [my teammates] and seeing our name up there on the screen was priceless. You can't really explain it. There aren’t really words for the feelings that I have.”

If the Crimson is able to upset the Commodores, it would meet the winner of the matchup between 13th-seeded Montana and fourth-seeded Wisconsin on Saturday.

But Harvard can’t look past Vanderbilt, which enters the NCAA tournament on the heels of a huge upset of the tournament’s overall No. 1 seed, Kentucky, in the finals of the SEC conference tournament Sunday afternoon.

“Certainly, Vanderbilt, just seeing what they've done today beating Kentucky in the final of the SEC tournament, obviously we know how tremendous of a ball club they have,” Amaker said. “I know they're a veteran basketball team [and] a good ball team…to play the way they played in the past and have the kind of team they have now. "

If the Crimson can win two games this coming weekend, the second leg of its journey would bring Harvard a lot closer to home, as Boston plays host to the Eastern Regional semifinal and final games. But, according to McNally, that possibility isn’t even on Harvard’s radar right now.

“All these specifics, they don’t really mean anything yet,” McNally said. “We’re in it. We were able to do it. This is why I came here. I love the sport of college basketball.... This is the best sporting event in the world, and to be a part of it, that’s one the biggest dreams I’ve had so far.”

With midterm season just behind the squad, Crimson players noted increased fan excitement all around the Harvard campus.

“Everybody’s in the library, studying,” Wright said. “You’re walking to go get a snack in between study sessions, and you see students. They’re giving you high fives and telling you good luck and congratulations. And these are people that you’ve never talked to before or seen before. The culture that I’ve seen grow here is absolutely phenomenal.”

But midterms won’t be an issue this weekend, and Amaker feels confident in the team’s usual pre-game preparations heading into the latest game endowed with the title of 'biggest game in Harvard basketball history.'

“We’re going to be ready to go to work tomorrow,” Amaker said. “We’ve been practicing well.... We know that we’ve played in a tournament before this year, and we’ve been in a neutral site environment on courts, and we’ve played against some teams comparable to the team we have to play coming up this week. So I think we need to take business as usual in a lot of ways.”