Harvard Men's Basketball Falls in Second Round of NCAA Tournament 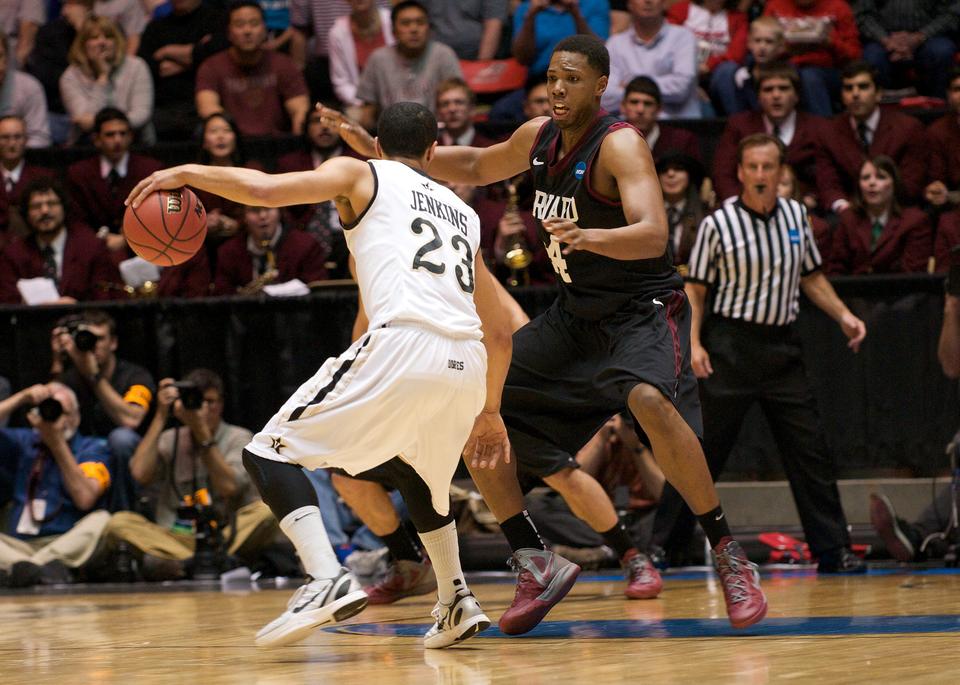 ALBUQUERQUE, N.M.—Despite their historic accomplishments, the three members of the Harvard men’s basketball class of 2012 have left one more significant program milestone in the hands of future generations: a postseason victory.

Nine days after a Penn loss clinched the Crimson’s first-ever outright Ancient Eight title, Harvard (26-5, 12-2 Ivy) fell to Vanderbilt, 79-70, in the second round of the NCAA tournament Thursday afternoon.

Sophomore wing Laurent Rivard had a team-high 20 points on 6-of-7 shooting from three for the 12th-seeded Crimson, which has never won a postseason tournament game in five tries.

But co-captains Keith Wright and Oliver McNally, along with center Andrew Van Nest, will ultimately be remembered for having brought a much-maligned program out of the doldrums of college basketball.

“We made the tournament. We wanted to advance. That was obviously the ultimate goal,” McNally said. “But for players coming in, this is a big deal, and we get a lot of credit…. We were coming in to build a program from the ground up, and that’s exactly what we did.”

Junior guard John Jenkins scored 27 points to help No. 5 seed Vanderbilt (25-10, 10-6 SEC) stave off a late Harvard rally and snap an unlucky NCAA tournament streak of its own.

“I thought we were going to come back—it’s well-publicized that Vandy’s lost in the first round the last three out of four years,” McNally said. “So we knew if we were hanging around, we’d put that thought in their head and see what happened.”

Now having avoided their fourth opening-game loss during March Madness in five years, the Commodores move on to the third round of the East Regional, where they will face No. 4 seed Wisconsin on Saturday.

Vanderbilt’s veteran lineup had no trouble carrying over the momentum from its win over No. 1 Kentucky in Sunday’s SEC tournament championship, nearly turning Thursday’s academically prestigious matchup into a rout.

A three by junior Christian Webster gave Harvard a 20-17 lead with 5:28 to go in the first half, but Vanderbilt closed the period on a 16-3 run to hold a 33-23 advantage at intermission.

“I think we got sloppy with the ball offensively,” McNally said. “Also, I don’t think we did a good job rebounding the ball defensively. It’s tough because our big guys had to square up with some monsters down there.”

One such player was Commodore senior center Festus Ezeli, who had a game-high six rebounds in the first period and finished with 11 boards along with four blocks.

The 6'11 big man and his teammates proceeded to hit their first seven shots of the second half and opened up an 18-point lead on a fast-break dunk by senior forward Jeffery Taylor with under eight minutes to play.

“Their ability to hit threes…and certainly their size and strength and athleticism [are] something to be reckoned with,” Amaker said.

Juniors Kyle Casey and Brandyn Curry—who had 13 and 12 points on the day, respectively—reeled off seven straight points to cut the deficit to 11 at the 6:15 mark, but Harvard found itself back in a 16-point hole one minute later.

Then it was Rivard’s turn to keep his squad in contention. The only underclassman starter for either team drained two three-pointers in a 24-second span to make it 68-57, Vanderbilt.

“He torched us in the second half like nobody’s business,” Commodores coach Kevin Stallings said. “That kid was spectacular today.”

On his squad’s next possession, McNally drove into the lane and passed it to a cutting Curry, who hit a finger roll with 3:30 left to bring the Crimson within single digits for the first time in the period.

After a Curry layup again brought Harvard within nine one minute later, the second-team All-Ivy guard forced a turnover on the ensuing inbounds play.

Casey and Wright combined to make four free throws on their squad’s next two possessions, closing out a 14-3 Harvard run that cut the Vanderbilt advantage to 70-65 with 1:51 to go.

But following a 1-of-2 performance at the free throw line by Taylor, the ball inadvertently squirted out of Curry’s hands on the left wing. A leaping McNally attempted to throw it off Commodore guard Dai-Jon Parker along the sideline, but the ball stayed in play long enough for Parker to chase it down.

The Ivy League’s lone tournament representative was then forced to foul. Though Vanderbilt had gone 13-of-22 from the free throw line up to that point, Jenkins hit six free throws in the final minute to seal a Commodore victory and send the Crimson home.