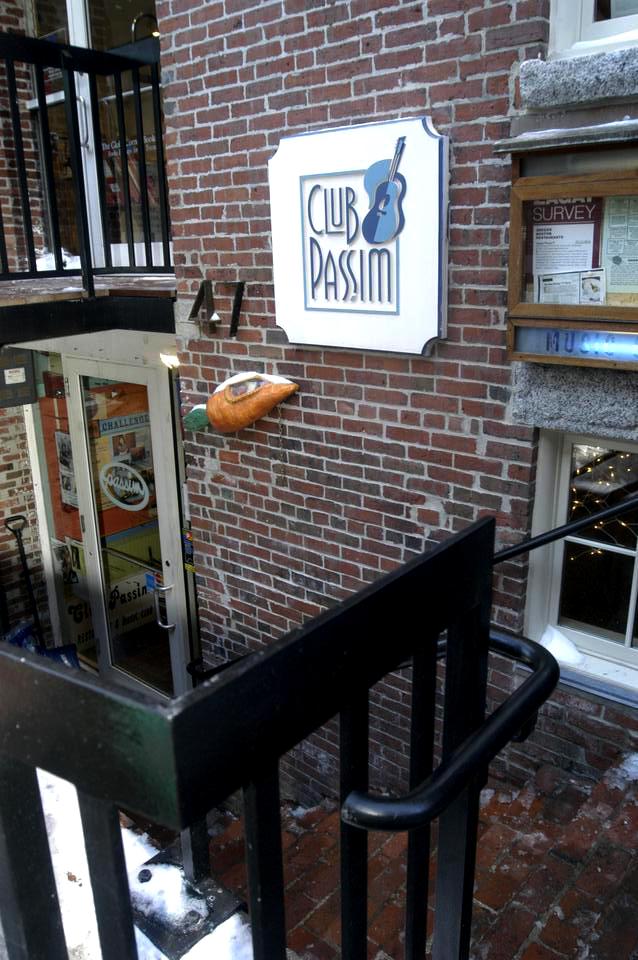 On a Sunday night in March, people line up outside the door to get into Club Passim, the unassuming basement space on Palmer Street.
By William R. Dingee

On a Sunday night in March, people line up outside the door to get into Club Passim, the unassuming basement space on Palmer Street. Inside, the venue is stifling with heat from the kitchen and the cramped bodies of the patrons—men and women of all ages—as the smell of good food wafts through the air. The white walls are covered with the legendary faces of a storied past: Joan Baez, Bob Dylan, Joni Mitchell. The floor is paved with worn brick, exposed piping crosses the ceiling here and there, and diners crowd around little square tables, enjoying their meals before the show. When the show starts, the lights go down in the dining room and performers take to the stage, their sounds filling the tiny, hot room.

In 1958, Joyce Kalina and Paula Kelly opened up a new jazz club at 47 Mt. Auburn Street. Fittingly named Club 47, it was relocated to its current space on Palmer Street in 1963.

During Club 47’s early years in the late ’50s, Cambridge was a central hub of the American Folk Revival—what Passim’s managing director Matthew Smith describes as “young, educated people rejecting the popular ’50s music and looking for something that meant a little more.” These restless college students gravitated towards the tradition of socially conscious American music coming out of the working class ballads of Woody Guthrie and the blues of the Mississippi Delta.

Folk performers began to move into the new venue at 47 Mt. Auburn and make it their own—many of them students from local colleges like Harvard, Boston University, and Boston College. A number of performers who would move on to enjoy great fame got their first exposure at Club 47, including singer-songwriter Tom W. Rush ’63 and Joan Baez, who studied at Boston University.

Notably, a little-known performer from the Midwest, who went by the name Bob Dylan, played in between sets during the early ’60s. Though he never received a proper billing, Club 47 had become such a standard that performers like Dylan welcomed the opportunity just to say that they had played there. The club also helped to bring north many of the retired and neglected Southern blues musicians of the ’30s and ’40s—like Skip James, Son House, and John Lee Hooker—whose records college-age folkies were rediscovering.

“Club 47 was the big center of it all,” Smith says. “Anyone who was part of that scene in those days, they played here.”

THE REBIRTH OF A VENUE

By the late ’60s, Dylan had become a folk messiah—only to go electric and shake the Folk Revival establishment to its core. The movement became embroiled in the political turmoil and loss of innocence of the Woodstock generation. The people who had started the club in their early ’20s were getting older and beginning to move on, and the folk music community was dwindling.

The club shut down in April 1968. After a limbo period, the space was reopened in 1969 by a couple named the Donlins—this time, as a gift shop. Although they had no plans for music, fans and musicians continually visited the historic venue in search of song. As a result, the Donlins began to host performers, and thus, the club was reborn in its current incarnation as the evocatively named “Passim” (pronounced “pass-EEM”), a Latin term meaning “here and there.”

Over its four decades, Passim has seen many changes in the music and performers it has hosted, but it remains true to its sense of tight-knit fellowship.

For patrons like Sam Litvin, who has been going to Passim for a decade, it’s this same sense of community that brings him back time after time.

“It’s the best venue for folk music I’ve ever been too. There’s a sense of intimacy, and a community with an audience that really cares about the music,” he says.

Kimber Ludiker, a bluegrass musician, has been playing at the club ever since moving to Somerville four years ago. For musicians like her, playing here is a special experience.

“It’s so intimate, and there’s not a bad seat in the house,” she says. “There’s definitely a sense of history.”

Rather than being stuck revering its history, Passim envisions itself as a vital and vibrant community: a melting pot where talented performers of diverse backgrounds come together to collaborate and to share ideas.

Passim operates as a nonprofit today, but continues to receive support from Harvard, which has allowed the club to hold events in Sanders Theater. Passim’s offices are also located in a Harvard-owned building.

“Harvard has been a good partner for us. We’re very appreciative of the support we’ve had,” Hogan says.

From the start, the folk scene that made Club 47 so famous has thrived on the intellectual and creative energy of the community around Harvard. The first Tuesday of every month is open-mic night: student performers are welcome.