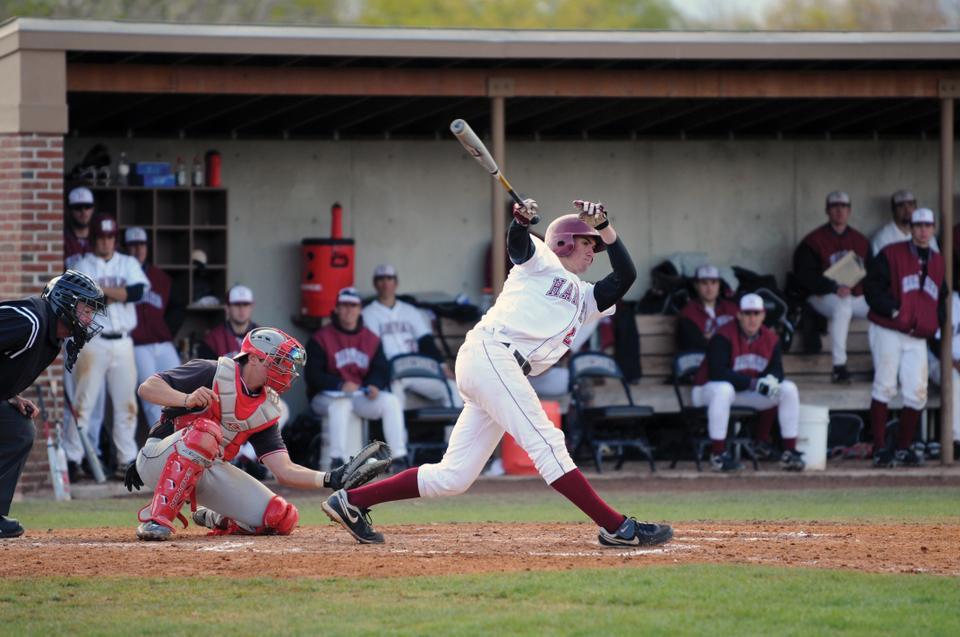 Senior Brent Suter and the Harvard baseball team captured just their second win of the season this week against non-conference opponent Holy Cross. The Crimson looks to improve its record as it faces its first Ivy adversaries in a pair of doubleheaders against Cornell and Princeton this weekend.
By Joseph Pak, Contributing Writer

The road can be a merciless, unforgiving place. The Harvard baseball team has found that out the hard way.

Before its win over Holy Cross, the Crimson had lost 10 of its last 11 games by fewer than two runs per game.

The Crimson (2-16) is coming off its second win of the season against the Crusaders. Harvard jumped out to an early 7-0 lead against Holy Cross (11-10), but found itself desperately clinging to a one run lead in the 9th until senior left-handed pitcher Brent Suter came in for the save.

Both the Crimson and the Big Red—who Harvard will face on Saturday—struggled last season.

Last year, Harvard was 9-36 and at the bottom of the Rolfe division. The Crimson floundered both at home and away.

Similarly, Cornell was 10-30 overall, at the bottom of the Gehrig division, and struggled both at home and away.

And in their two meetings last season, the two clubs split decisions.

The second game was all Cornell. The Crimson dug itself into a double-digit deficit in the second inning and was never able to reestablish itself. Big Red outfielder Brian Billigen had six at bats in the game with two homeruns and 4 RBIs to lead his team to an 18-5 win.

This season, Cornell looks to be a completely different team.

Breaking program records left and right, the Big Red cleaned up a three game series to end a successful spring break trip to Virginia. Cornell has its best record through 18 games since 1906 and is coming off four wins and a tie, all while being on the road. The Big Red is the only Ivy League team to head into the season opener with a winning record.

Senior outfielder Brian Billigen is the spark to the Cornell offense, batting .452 with 22 RBIs and four homeruns. The Pennsylvania native was named Ivy League Player of the Week on March 6 and has built a blistering 16-game hitting streak.

In contrast, Harvard has sputtered on the road to begin this season.

“[The win against Holy Cross] gives us a lot of momentum going into this weekend,” sophomore catcher Steven Dill said. “Getting that win was big for us. It gives us a lot of confidence, especially since we have been losing a lot of close games.”

Harvard will not be at home until April 4, when it hosts Boston College. It plays a total of 22 road games to start its season.

Although the Crimson has struggled, the return of Way from injury is sure to give the offense a boost.

“He’s a leader on the field. He has a great lefty stick for us,” Suter said. “He’s got a lot of power and is a good hitter all around.”

“It feels incredible to be back, especially because I didn’t know if I was going to be back until the end of the season,” Way added. “At this point, after getting injured and thinking that may be my season and career…I’m just happy to be out there.”

Way, the hero of the Crimson’s win against the Big Red last season, will be another offensive piece to a Harvard team that has been picking up its hitting.

Sophomore Carlton Bailey will be another player to watch this weekend in the Ivy League opener. Bailey leads the Crimson in batting average with .346 and is third in slugging percentage with .423.

Harvard will have to be stingy defensively against the red-hot Big Red offense.

“Fielding bunts...that’s kind of been our Achilles heel,” Suter said. “But we are getting better in that area. We’ve been fielding a lot of ground balls…working on turning two. We know if we want to win these games, we are going to have to get that double play going.”

Princeton is coming off its spring trip on a high note, winning its second series of the year. Alec Keller and Sam Mulroy have been dominant for the Tigers, hitting for a combined 31-for-73, with 28 RBIs, 18 runs, and four homeruns. Mulroy  is also sporting a nine-game hitting streak going into the weekend.

The Crimson dropped both matchups last season to Princeton.