'Project X' Stars Party Hard on and off the Set 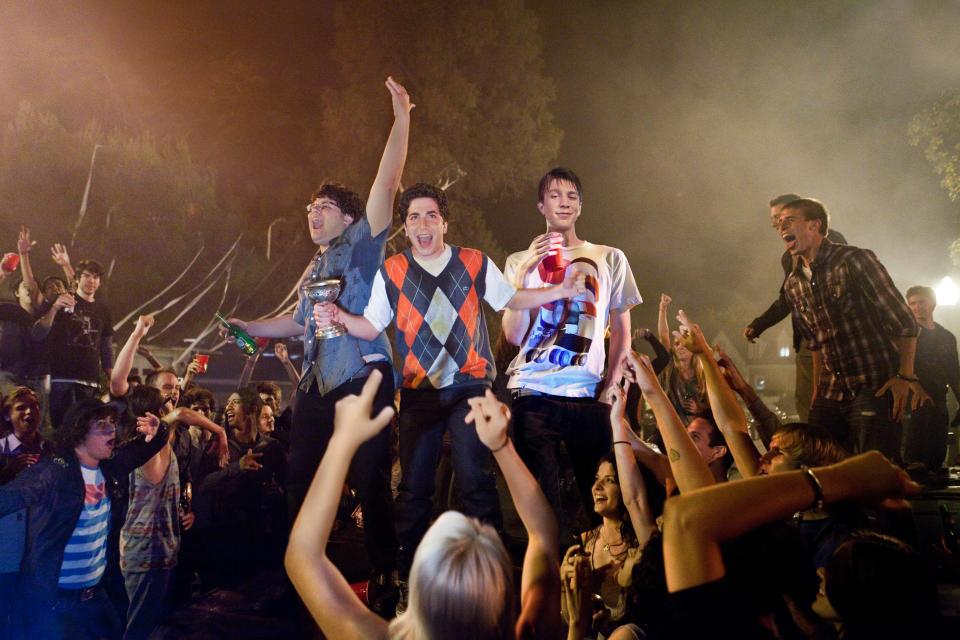 Partying on and off the set, visiting Disneyland, and feeling hung over—just another day in the lives of the stars of the upcoming film “Project X.” Thomas Mann and Jonathan D. Brown talk about their experience during the filming of “Project X,” which chronicles the 17th birthday party of nice guy Thomas  (Mann) and the hijinks that follow. Co-star Brown plays JB, a shy self-proclaimed “fat Jew.”

The Harvard Crimson: Your characters in the movie seem very close. How did you develop a relationship?

Jonathan D. Brown: Hanging out with each other.

Thomas Mann: The only preparation we did was hanging out with each other and building a history so that the chemistry works on-screen. They set up little “play dates” for us.

TM: Yeah, we went to Disneyland.

JDB: We took initiative too. We were like, “Let’s go get Chinese food!”

TM: We went to Big Bear [a mountain getaway in California] one weekend.

JDB: We bonded. We still hang out. TM: All the time. This [movie] is a big thing that ties us together.

THC: There must have been plenty of competition for a role in a movie like this. How did you end up getting cast?

TM: They did a nation-wide talent search, and a lot of people submitted…[over] 3000 videos, tape submissions, which is how this guy (points to Jonathan) got cast.

JDB: Yeah, I did an open call audition over the internet. I saw a random blog that said “casting” and I’m like “Okay.” I had no real acting experience. I was actually pursuing stand-up. It snowballed from there. Three months and nine auditions later, I got it. A brutal gauntlet of tests. I lucked out.

TM: It was an audition for me. I ended up going in seven or eight times. It was tough.

JDB: Going three weeks without hearing anything is like a punch in the gut.

JDB: The movie’s better for that brutal process.

THC: Critics and viewers will undoubtedly label this film a “party movie.” Does it have a more significant meaning?

TM: It’s an experience. It’s a real feast for the eyes.

JDB: But I think there is an element of commentary about the social structure in high school.

TM: It’s important for it to stay grounded… Costa’s [the actors’ third co-star] character is big, and he’s the instigator.

JDB: We all know someone like him; everyone knows a Costa, a jackass like him. TM: And there are kids like Thomas who are more shy and reserved. They want to get out of their shell but are too afraid to take the risk.

JDB: And then there’s a fat Jewish kid.

THC: Why is the movie called “Project X?”

TM: It’s the idea that they decided to document the party and gave it the name “Project X.”

THC: The dialogue in the film sounds authentic. How much of it was scripted and how much was improvised?

TM: There was a lot of improvising in rehearsals.

JDB: Not as much in the movie.

TM: Once we were cast they rewrote the script for our specific voices. We would shoot as it was written.  Then we had some room to play.

JDB: There were two credited writers: Matt Drake and Michael Bacall. Bacall came up with the story then they wrote the script together. Then there was the on-set writer who played a massive role in changing the characters to our tune.

TM: There was a lot of rewriting on the day. It was spontaneous.

JDB: Even though it’s a movie, it is borderline interactive.

TM: The idea is to make you feel like you’re there. Even though it’s a “found footage film,” it’s stylized.

JDB: No shaky camera holding. If you go out [of the theater] and feel hung over, you won’t feel nauseous, you’ll just feel tired. You feel beat.

TM: Yeah, you feel exhausted afterwards. The movie is so fast paced.

THC: What is your favorite song from the movie?

JDB: “Pursuit of Happiness (Steve Aoki Remix)” by Kid Cudi. It’s kind of the unofficial anthem of the movie.

—Staff writer Aaron H. Aceves can be reached at aaceves@college.harvard.edu.