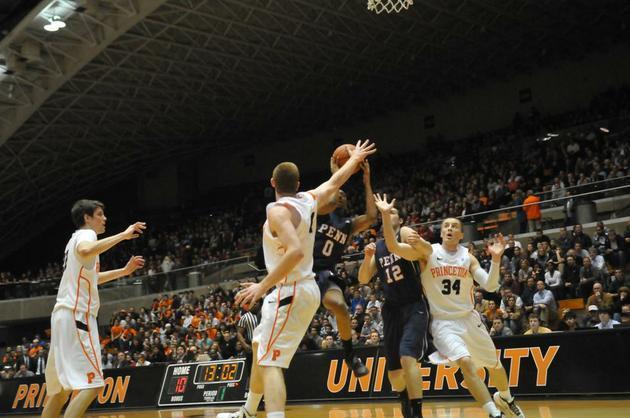 Thanks to Princeton's 62-52 victory over Penn Tuesday night, the Harvard men's basketball team is going to its first NCAA tournament since 1946.
By Scott A. Sherman, Crimson Staff Writer

For the first time in 66 years, the Harvard men’s basketball team is going dancing.

Thanks to Princeton’s 62-52 victory over Penn Tuesday night, the Crimson has won the first outright Ivy title in program history and will be participating in March Madness for the first time since 1946.

Harvard’s seniors—who had worked for this moment since buying into a vision laid out by coach Tommy Amaker, who recruited them following an 8-22 season in 2007-08—could not be more thrilled.

“Oh my God, this is crazy, this is absolutely crazy,” co-captain Keith Wright said. “You have no idea how excited I am. I’ve been running for 30 minutes, in the freezing cold, screaming at the top of my lungs.”

With a victory at Princeton’s Jadwin Gymnasium, the Quakers could have clinched a share of the title and forced a one-game playoff, which would have been held Saturday at Quinnipiac University

But the Tigers—who topped the Crimson on a Doug Davis buzzer-beater in last year’s Ivy playoff—made another such play-in game unnecessary.

“I’m with the guys in the Quad, and we all got together to watch," sophomore wing Laurent Rivard said. "We’re just having fun right now; we’re really excited that this happened for the first time in 66 years.”

It has been a season marked by firsts for the Crimson, which won its first-ever tournament at the Battle 4 Atlantis over Thanksgiving break and earned its first-ever Top 25 ranking in December.

The overwhelming preseason favorite, Harvard was expected to finally represent the Ancient Eight in the Big Dance this year after falling just short in 2010-11. After the squad went 16-2 heading into the meat of conference play, such a feat looked even more inevitable. But the Crimson slipped up twice against its Ancient Eight rivals, falling, 70-62, at Princeton on Feb. 11 and losing, 55-54, at home to Penn two weeks later.

The Quakers victory and two home wins last weekend put Penn in position to clinch a share of the title Tuesday night, but Princeton held Quakers star Zack Rosen to just 8-of-24 shooting and received 18 points from forward Ian Hummer to help it break the hearts of its archrival.

Now, instead of playing Saturday, Harvard will await its fate on Selection Sunday, when it will find out its tournament seed, opponent, and destination. As of Tuesday night, ESPN’s Joe Lunardi currently has projected Harvard as an 11-seed.

Before the season, co-captain Oliver McNally said partaking in March Madness was the squad's goal and a personal dream.

“I'm a die-hard college basketball fan; I have been my whole life,” McNally explained. “I think the greatest sporting event in the world is the NCAA Tournament, hands down, and obviously I want to play in it one time before my time is up.”

In his senior year, after helping Harvard emerge from two close road games with wins at Columbia and Cornell last weekend, McNally will finally be getting the chance to dance.

The evening also brought a long-awaited return to the tournament for Amaker, who last reached March Madness as coach of Seton Hall in 2000 and was unsuccessful in bringing Michigan to the Dance during his six-year tenure there.

“We are thrilled and honored to have an opportunity to compete in the 2012 NCAA tournament,” Amaker said in statement. “This is a tremendous moment for Harvard University, our basketball program and our community. Go Crimson!”

This time around, the tournament will be 60 teams larger, and Harvard could end up playing its first-round game on March 15 or 16 in one of eight cities ranging from Pittsburgh to Portland.

But no matter where it ends up, the Crimson will be ready for the challenge that lies ahead.

“Now that we’re in the tournament, we can’t stop working,” Rivard said. “We want to advance.... That’s the next goal.”