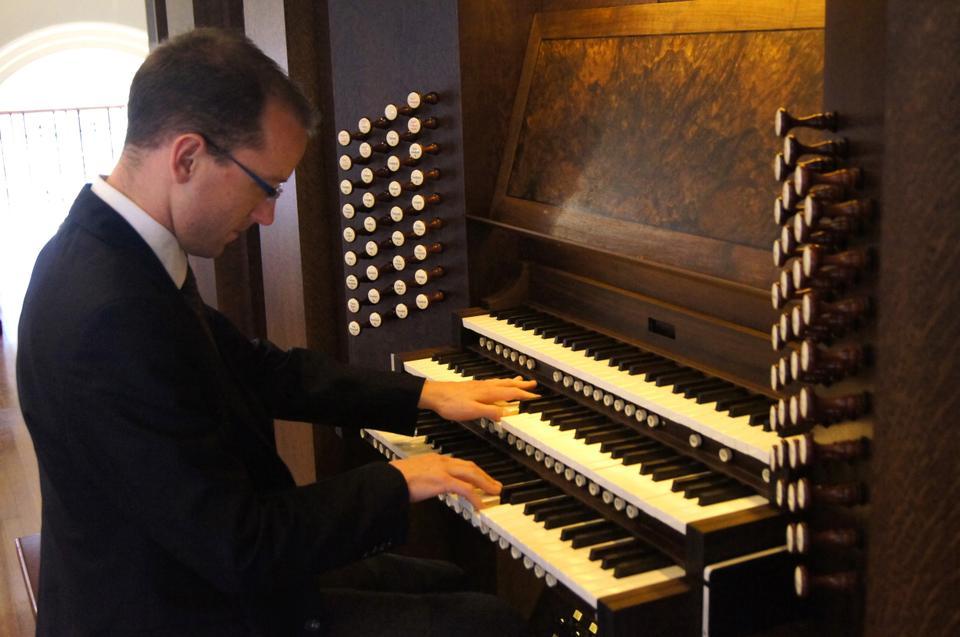 Assistant University Organist and Choirmaster and musician Christian M. Lane performs on the new pipe organ at Memorial Church, which was debuted to the public on Sunday, April 8.
By Laura K. Reston, Crimson Staff Writer

In a balcony overlooking the nave of Memorial Church, Christian M. Lane hunches over three keyboards, passionately pounding chords. He loses himself in the music, as the gold pipes lining the wall produce a cascade of notes that expand and trill in the large chamber. In the pews on the floor, his audience is captivated.

Two weeks before, Lane had perched on the same organ bench as he surveyed an empty and echoing Memorial Church from the balcony.

He tucked one leg casually under him to reveal a pink and purple pair of striped socks under his dark suit, while he chatted about organ history, favorite composers and goals at Harvard.

Since his arrival at Harvard in 2008, Lane has received international acclaim—most recently with his victory at the Canadian International Organ Competition—establishing his position as among one of the best young organists in the world.

As a relatively young musician, Lane seeks to reenergize a staid school of organists. Lane wants to challenge the organ’s reputation as an old-fashioned or outdated instrument.

He says that organists can even learn from the energy and identity of pop music from artists like Adele and Lady Gaga. According to Lane, musicians must engage their audience with the creativity and passion to lend a unique interpretation to their piece.

“Notes are only the beginning,” Lane says.

During his four years at Harvard, Lane has become an integral part of the Memorial Church and Lowell House communities—on Sunday, Lane christened the first new organ to be installed in Memorial Church in the past five decades.

But though Lane says he has found a home at Harvard, the 31-year-old will step down from his post as Lowell House tutor next year in order to pursue his larger goal: to bring new life to a dust-coated genre that has become in large part irrelevant in today’s popular music scene.

Lane grew up in Walkersville, Maryland, a small rural town that Lane has watched transform into suburbia for nearby Washington D.C. and Baltimore.

Although his family was not particularly musical, Lane says that he always gravitated towards music. According to Lane, his mother briefly studied piano while pregnant with him.

“I’ve always wondered whether that explains my musical bent,” he says.

He started to play the piano at the age of five, attending his first piano lesson on his first day of kindergarten. A year or two later, Lane had moved on to the organ.

Since Lane’s father is a pastor, Lane had access to an organ from an early age. The entrepreneurial youth used his talents to play for the church to supplement his allowance.

But although he attributes some of his technical deficiencies to his sparse practicing, he says that he appreciated the freedom to explore and develop his talents independently, developing a life long love for music and the organ.

Still, “I never set out to be an organist,” says Lane, who was involved in musical theater throughout high school and hoped to move to New York after graduation.

He always knew however that he would attend a musical conservatory, which he did, first at the Eastman School of Music and then Yale, where he earned prizes for excellence in the organ. After graduating from Yale with two collegiate awards, several national honors, and a master’s degree in music in organ performance under his belt, Lane would sets his sights on the international stage.

Lane had practiced for several grueling months before the competition, says Marissa A. Glynias ’12, a student and mentee of Lane’s.

With construction on the instruments in Memorial Church over the last few years, Lane occasionally could only practice on the organ at 2 a.m., says Edward E. Jones, organist and choirmaster at Memorial Church.

Lane’s hard work paid off at the competition, where Lane captured his audience with the passion and creativity he channels into his performance.

“He has a dignity and beauty as he plays,” Eck says.

Lane throws himself wholeheartedly into the piece, losing himself in the music until “he himself is part of the composition,” says Dorothy A. Austin, associate minister at Memorial Church and master of Lowell House.

“I can communicate very effectively in a way that my colleagues struggle to do, but it comes for at the expense of technical accuracy,” Lane says.

In fact, Lane lists technique as his greatest weakness.

“I engage in a very physical way,” Lane says. “From a technical standpoint, that’s not a good thing.”

But Jones disagrees. He says that Lane combines innate musicality with an impressive technique honed at some of the best music conservatories in the country.

In fact, Lane thinks that the organist community occasionally becomes bogged down in dogmatic, theoretical discussions of musical technique.

“Yes, all those theoretical and intellectual arguments are important, but fundamentally, we have to speak to our listeners,” Lane says.

His ability to connect to his audience has served him well in competition.

“My goal is to make the judges stop writing, to make them stop and listen and say, ‘Yeah, this is something I can embrace,’” Lane says.

And Lane succeeded in grabbing their attention.

The win will open up incredible recording and touring opportunities over the next few years, propelling Lane toward further musical fame.

According to Eck, Lane now faces a moment when he career has begun to take off.

But Lane modestly says that the victory will not change him.

“If something had changed, it would speak less of me as a person,” Lane says.

HOUSE AND HOME AT HARVARD

Lane moved to Cambridge four years ago to work as the assistant choirmaster and organist in Memorial Church and a tutor in Lowell House.

“I love Boston and this academic setting,” Lane says.

His position at Memorial Church currently facilitates Lane’s three goals: teaching students, playing in a church and performance outside of Cambridge.

At Harvard, Lane sets aside time from his busy schedule to mentor undergraduates with musical aspirations.

“Chris is both an authority figure that we can respect as a conductor but also a really good friend,” Glynias says.

As both authority figure and friend, his position is unique.

Glynias says that Lane’s presence at the church as a successful musician is comforting to her and other students pondering professional careers in music.

As a Lowell House tutor, Lane is known for organizing casual concerts for the enjoyment of House residents. For Eck and Austin, Lane is the apotheosis of the friend and mentor that tutors should be. “He’s very good with undergrads,” Eck says.

Jones echoes this sentiment, noting that Lane’s dedication and determination provides a good role model for young musicians involved in the church’s community.

Next year, Lane will leave Lowell House to tour across the country and abroad, but will remain in his position at Memorial Church.

Eck and Austin says they are sad that Lane will be leaving Lowell, though Austin noted that she wants Lane to have the freedom to accept traveling and recording offers.

Lane is also saddened by his looming departure but feels that in order to realize his goal of reviving organ music, he must move outside Harvard’s somewhat insular community.

“It’s important to be engaged in my profession outside these walls,” Lane says.

—Staff writer Laura K. Reston can be reached at laurareston@college.harvard.edu.