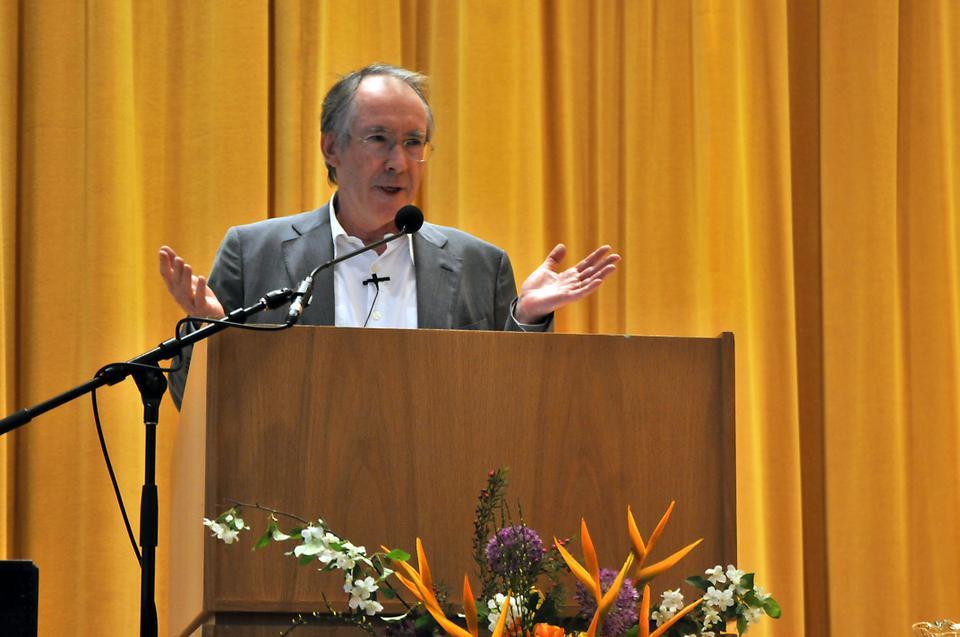 “Give me a place to stand, and I will move the earth.”

Ian R. McEwan, the acclaimed author who penned, among other works, “Atonement,” quoted Archimedes in his talk at the Mahindra Humanities Center on Tuesday.

Archimedes’ declaration—alluded to in the lecture’s title, “The Lever: Where Novelists Stand to Move the World”— was McEwan’s jumping off point to talk about the use of realism in his work.

“We must assume some high degree of loyalty to the levers and fulcrums—to the laws of physics,” McEwan said. “I have refused to give my characters wings.”

In the lecture, McEwan emphasized his dedication to realism as one of the defining features of his work.

“The air of reality, the solidicity,” McEwan said, “is among the supreme virtues of a novel.”

Throughout the lecture, McEwan read passages from his novels and letters from readers who pointed out fallacies in his works.

McEwan described a scene from his 1981 novel, “The Comfort of Strangers,” in which he describes one of his characters observing the constellation Orion in the Italian summer sky—an impossibility, since Orion cannot be seen from the northern hemisphere in the summer.

“If you want to see Orion during the summer you must go to New Zealand,” a reader wrote to McEwan.

McEwan responded aloud to his audience, “It never occurred to me that I was turning the heavens around.”

After the lecture, McEwan said that his goal for the talk was to shed light on the life of a novel from the perspective of an author.

“Once a novel is written, that’s when its life begins,” he said to the audience. “It’s not just existing in some sort of pure space.”

Michael E. Mitchell ’14, who attended the lecture, said, “I felt the talk was actually very well constructed. I liked that McEwan made it seem like he was going to be rambling with a series of anecdotes, but actually tied them together very neatly at the end of his talk.”