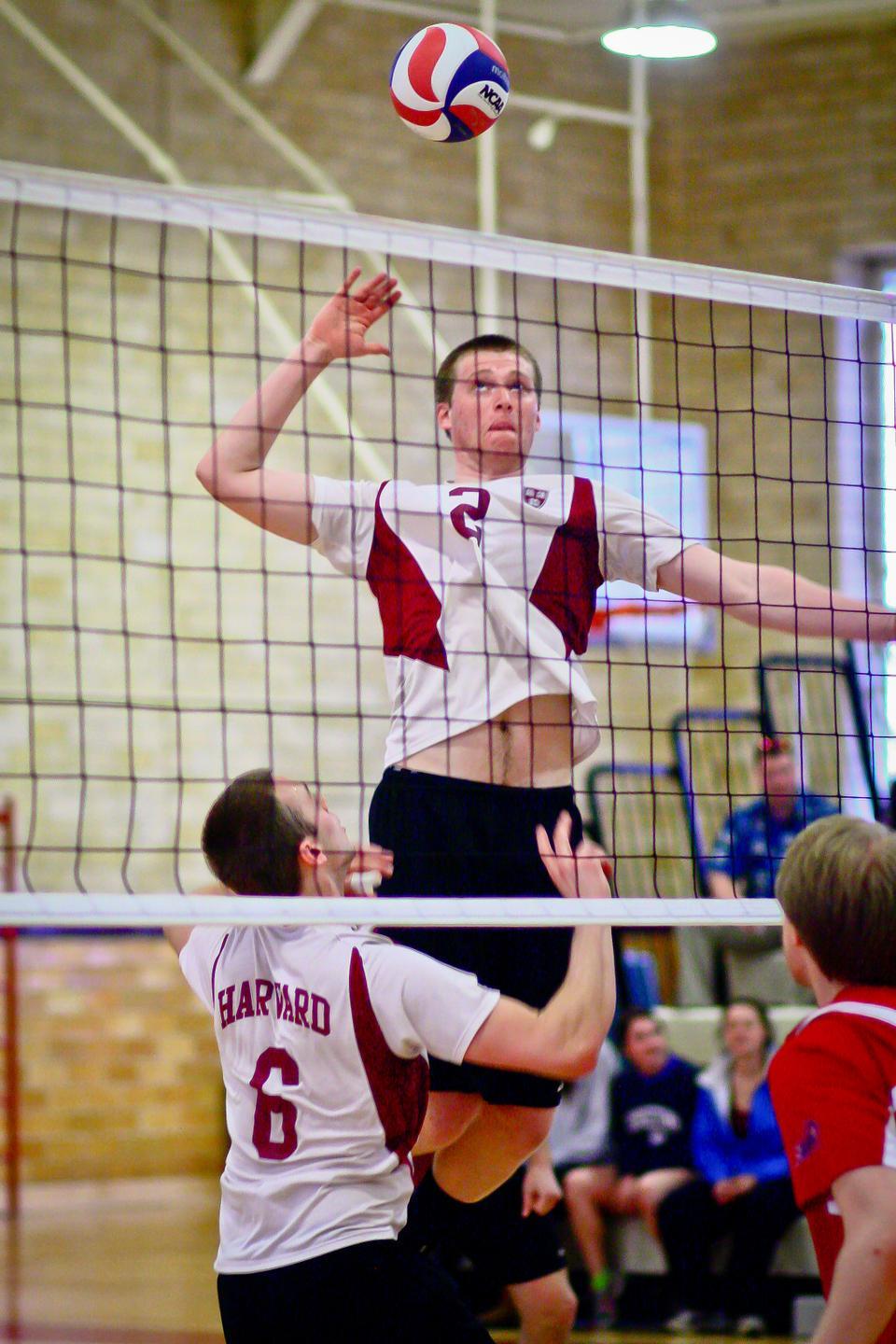 After a series of errors gave away the second set, the Harvard men’s volleyball team had seemingly lost all of the momentum it had earned in its first-game victory. But after a lengthy locker room meeting, the Crimson refocused and turned on the jets, cruising to a 3-1 victory against Rutgers-Newark in front of a raucous crowd at the Malkin Athletic Center Friday night.

Harvard (16-3, 8-2 EIVA) recovered from a second game fraught with attack errors and mental lapses, and the team energy appeared to take a dip. But after the second-game intermission with Harvard coach Brian Baise, the Crimson’s focus seemed resharpened, and the level of play began to reflect that.

“I will say I didn’t think it was our strongest game,” junior setter Rob Lothman said. “But fortunately, we were able to dig deep, Coach [Baise] had a good locker room talk, we built each other up, and we were able to come out in games three and four and really grab some momentum.”

The opening exchanges of the first game were mostly even, with the two teams trading points back and forth. But Harvard was able to engineer some short runs to give itself some breathing space, and behind co-captain Matt Jones’ five kills, the Crimson edged Rutgers-Newark (8-12, 1-9), 25-20.

Harvard looked like the better team going into the second game but soon fell behind, 6-1, as Scarlet Raider Grant Metheny notched three service aces early. The lack of defensive discipline was matched with some Crimson attack errors, and the visitors began to reclaim the momentum.

Lothman believed the mistakes in the second game built upon each other and that the team’s response could have been better.

“We were just making mistakes, getting frustrated,” Rob Lothman said. “It’s true in every sport, but this sport in particular—you need to be able to get over your mistakes quickly…. They just compounded, and when they compound, it’s easy to drop a lot of points in a row.”

Baise added, “Mentally, when we make an error, [we need to] leave that error behind. Sometimes, I think we dwell on our mistakes too much.”

And though Harvard began to find its offensive rhythm, the Crimson could not dent the cushion the Scarlet Raiders had built for themselves. And after Baise’s second timeout of the frame at 17-9, Rutgers-Newark continued piling on, extending its lead to 11 with a 3-0 run.

And though the Crimson eventually dropped the game, the home team grabbed 9 of the frame’s final 14 points and reclaimed some momentum before a brief intermission.

“In the locker room, we really focused on not being frustrated when we made a mistake and really picking each other up and focusing on the next point,” Lothman said. “[We want to] make sure everyone else comes in and gives you a pat on the back, and lets you know, ‘We got your back, let’s get this next point. Don’t think about the last one.’ Because when you think about the last one, that’s usually when you drop the next one.”

The energy change was noticeable immediately, and Harvard’s passing and hitting improved greatly in the third game. The Crimson held a two-point cushion until 13-11, when Harvard strung together several powerful runs to extend its advantage. Despite two timeouts called by the Scarlet Raiders, the Crimson was back in the driver’s seat.

Behind freshman outside hitter DJ White’s five kills in the frame, Harvard rolled to a 25-15 win to take control of the match.

The Crimson continued to roll early in the fourth set and stormed to a 4-0 lead. Rutgers-Newark never found a foothold back into the match after its poor start, and Harvard took the set and match, 25-20.

Co-captain Matt Jones added five of his game-high 15 kills in the decisive set.