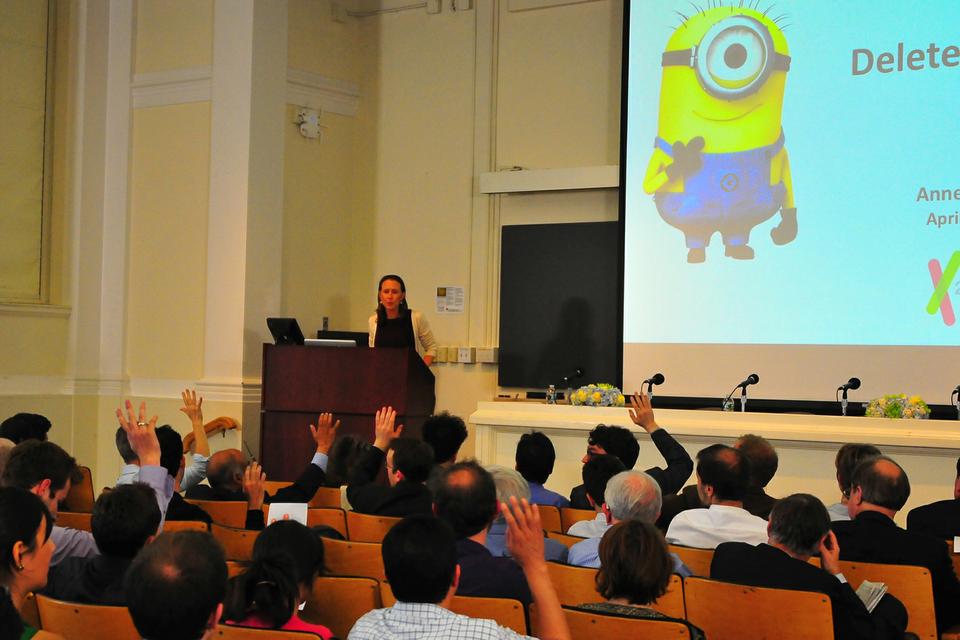 Anne Wojcicki said that she was not comfortable sharing her daughter’s photograph in public, but she did not hesitate to put up a different kind of picture for a packed audience in Emerson Hall on Tuesday night.

The CEO and co-founder of 23andMe—a biotechnology company that sequences and analyzes customer DNA —was invited to speak at Harvard in a lecture titled “Deleterious Me: Whole-Genome Sequencing, 23andMe, and the Crowd-Sourced Health Care Revolution.”

Wojcicki projected an image of her daughter’s chromosomes on to the screen and pointed out the brightly color-coded segments indicating which parts of the genome had come from which grandparent.

“Sequencing opens up a whole world that is going be very complicated,” Wojcicki said. “We have no idea what most of it means.”

But she spent much of her lecture highlighting the kinds of information that individuals can already find out from their genome—from learning one’s risk for diseases such as breast cancer and Alzheimer’s to calculating one’s degree of relatedness to evolutionary ancestors like the Neanderthals.

23andMe customers who submit their DNA in a mail-in “spit kit” can receive information about their genes through online profiles that are constantly updated as genetic research advances. The company relies heavily on “crowdsourcing,” whereby information volunteered by their customers is used to further research and make both ancestral and medical connections between other 23andMe clients.

”We’re the product that keeps on giving,” Wojcicki said. “The heart and soul of the company is research.”

Access to genetic testing has increased considerably in the last few years, with the cost of sequencing dropping from 999 dollars in 2008 to 399 today, according to Wojcicki. This increase in accessibility has made databases of companies like 23andMe some of the largest aggregates of genetic data in the world.

“Whether we want this to come or not, it’s coming,” said Wojcicki. “It’s going to revolutionize healthcare.”

But a number of panelists who spoke after Wojcicki expressed their reservations with the 23andMe model.

Jeremy A. Greene ’96, a history of science professor, commented on the “increasing convergence of risk and disease” and the changing role of the doctor-patient relationship. Within 23andMe’s structure, he said, patients are not only consumers but also “producers” of genetic information.

HKS Professor Archon Fung questioned whether such large amounts of genetic data should be governed by the private sector, adding that genetic information might be used against individuals in unjust ways.

“How much is that data worth?” he asked. “It may be the case that [23andMe] should be paying [customers] for the data.”

Wojcicki admitted that 23andMe intentionally sidestepped the medical profession during its inception because “it’s impossible to work in the system.”

“I don’t necessarily want my physician making all my decisions,” she said. “There should be choice in healthcare.”

Some attendees said the mix of perspectives complicated their own opinions on personal genetic testing.

“There’s this curiosity factor where I want to see what would pop up on the screen—but at the same time, I think I’m just wary really of what the larger implications are,” said Graduate School of Education student Noha Mahdi Hayder.

Wojcicki’s talk was part of the Science and Democracy Lecture Series organized by the HKS Program on Science, Technology and Society. Event moderator and director of the STS program Sheila Jasanoff said she was pleased with the variety of responses presented.

“Although these issues are being discussed in a lot of places, they tend to be fragmented in ways that don’t allow a coherent social picture around the moving frontier of an emerging technology to develop,” she said.