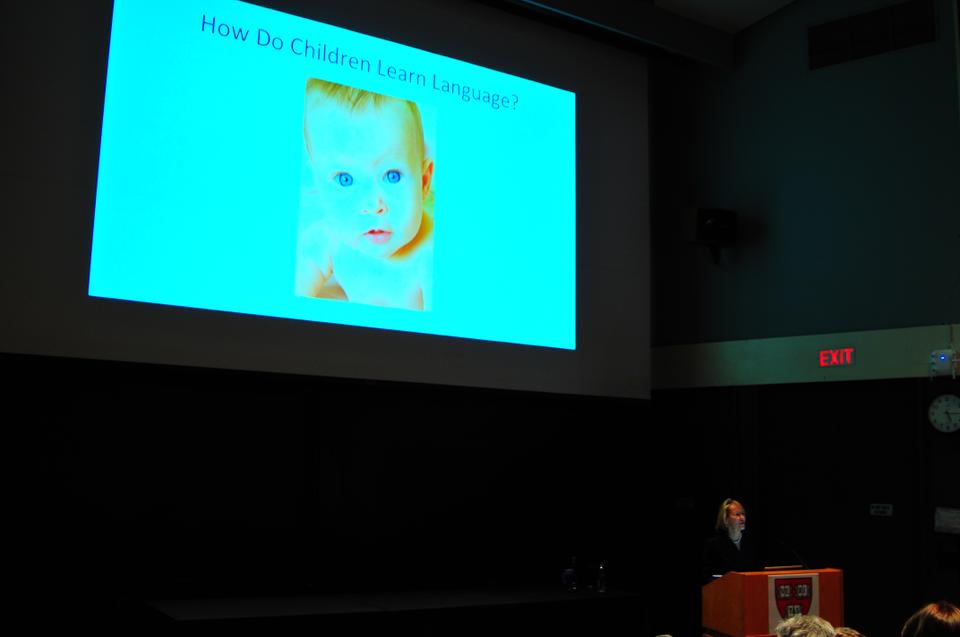 Dr. Patricia Kuhl, of the Institute for Learning and Brain Sciences at the University of Washington, discusses infant language acquisition as part of the Mind, Brain, and Behavior’s Annual Distinguished Lecture series.
By JOE B. LERER, Crimson Staff Writer

Babies are able to differentiate minute sound distinctions that would otherwise be lost to adults, University of Washington professor of speech and hearing sciences Patricia K. Kuhl said on Tuesday.

“Seven-year-old children are geniuses at learning languages, but with every two- or three-year advancement in age, their ability to learn languages declines dramatically,” Kuhl said. “After puberty, it becomes increasingly more difficult to learn languages at such a fast rate.”

“The hope is that if you have a biomarker for any of these disabilities, you could go in and do something about atypical learning patterns and change the trajectory of a child’s life,” she said.

The experiment placed a group of ten-month-old babies in a series of sessions lasting thirty-five minutes that introduced the infants to foreign language instruction in a face-to-face, private lesson setting. A second group of infants was shown a television screening of the same lessons.

The first group, which received personal instruction from a real human, recognized the vowel patterns of foreign languages at a much higher rater than the group of babies who viewed the televised lessons, implying the importance of social interaction for early language acquisition, she said.

“The more social behavior that took place during the sessions, the better learning the babies had on the phonetic level,” Kuhl said.

She said that the phonetic discriminations of a seven-month-year-old child predicted the reading skills of that child at age five.

“What children are doing early in locking onto sounds of language is a profound measurement of future learning,” Kuhl said.