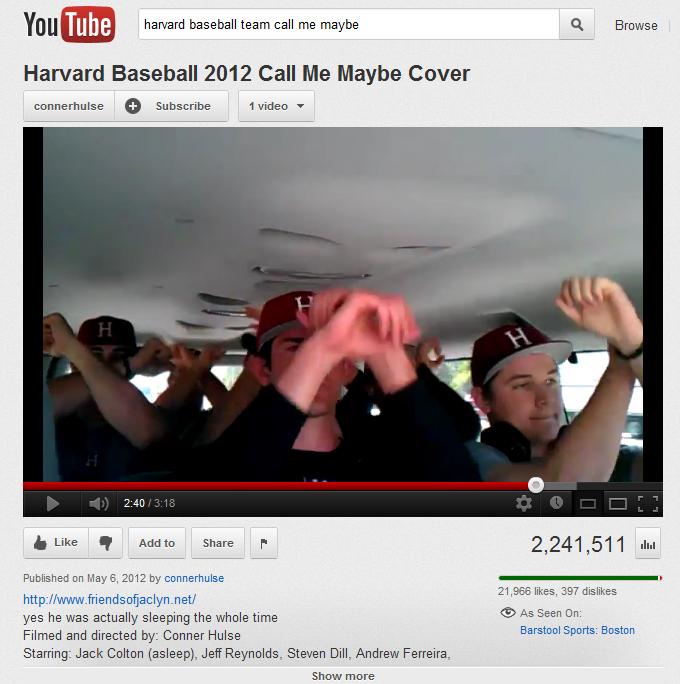 Recipe for fame: Harvard + sports team + choreographed dance moves + "Call Me Maybe." Starting off as a way to pass the time on a roadtrip, members of the Crimson baseball team decided to cover Carly Rae Jepsen’s hit song. Little did they know that their boredom would lead to stardom.

“During our spring break trip, we had a long drive to one of our games, and we didn’t have much to do,” senior Jon Smart said. "'Call Me Maybe' came on my iPod, and we started goofing off.”

According to sophomore Steven Dill, the team often turns to dancing and singing in the car when they have a long road trip.

The group started piecing together a routine, with everybody adding to the choreography.

“We got really into the choreography, and before we knew it, we were having a blast,” Smart said.

“Someone would suggest a move or idea, then we’d argue about it, and try it out,” senior Jeff Reynolds added. “It definitely helped us pass the time.”

Directed and filmed by senior Connor Hulse, the video was uploaded to Facebook and YouTube for their own entertainment.

“It was really just meant to give our teammates in the other vans something to laugh about,” Reynolds explained. “Connor sat on it for a while, then posted it—it blew up, which was a huge surprise.”

Just four days after May 6, when the video was posted on YouTube, the Harvard baseball team has over two million hits, and has enjoyed thousands of comments, retweets, and TV time exposing their choreography, lip-synching ability, and personalities.

Much of the commentary has concerned itself not only with the humor involved, but also the players’ good looks. The stars of the video have had to deal with their newfound fame.

Seniors Marcus Way, the lead of the second verse, and Smart, the lead of the third verse who is now affectionately known as “the wink guy” have received a lot of female attention via Facebook messages, tweets, texts, and yes, phone calls.

The views and comments are climbing on YouTube, all the while drawing more attention to the Harvard baseball team and the charity they support, the Friends of Jaclyn Foundation, an organization that supports children with pediatric brain tumors.

First, the team just posted the video, but when they saw it was going viral, they added a link to the Friends of Jaclyn Foundation website.

“We saw it as an opportunity to raise awareness for a great cause,” said Reynolds, who says working with the Foundation has been one of the “more meaningful and cooler things” the team has done.

“If half the people that watch the video click the link we put under the video, hopefully we will raise awareness and some money for them,” Smart added.

The Crimson adopted a boy named Alex as part of the FOJ Foundation, and have enjoyed having him and his mom at practices.

“We heard Alex watched the video and liked it, which is great,” Dill said.

“Originally, we didn’t think that anything would come of it,” Smart added. “But it’s really cool to be able to help Alex and the foundation.”

The team has been getting several calls, texts, messages, and tweets from old friends and colleagues, showing the spread of the video.

“It’s been fun to track its progression across the country,” Smart said of the video reaching Ohio, Texas, and beyond.

The spread has been assisted by several media outlets catching on to the craze.

So far, the team has received stories, shout-outs, and retweets from Sports Center ("@ SportsCenter: Guess it takes more than a van full of Harvard baseball players dancing to 'Call Me Maybe' to wake up their teammate"), the Huffington Post, Barstool Sports, Major League Baseball, ESPN analysts, Dallas Cowboys cheerleaders, and Justin Bieber’s manager.

“I heard that Carly Rae retweeted the video, so we finally reached the source,” Smart joked.

“It’s unbelievable that we were on Good Morning America,” Way said. “None of us expected that.”

Much of the focus has been on sophomore Jack Colton, who is sleeping in the back for the entire video.

“I can confirm that Jack was passed out cold,” Smart added. “He doesn’t remember us filming at all.”

The team has been excited and surprised by the popularity of the video, but is enjoying the fame for now. Instead of studying, they’ve been gathering together in Lamont and watching the hits and comments go up.

“It’s been kind of overwhelming, but really fun and funny,” Dill said.

“I don’t think any of us are taking it too seriously, and we know in a couple weeks it will probably be over, but that’s fine with us,” Reynolds said, “It’s definitely been a good time and amazing to see.”

Being part of a viral video is a fun experience that the players will remember.

“Obviously we had a tough year on the field, but the video shows that we always stayed together as a team,” Reynolds said. “It was really fun making it…and it’s been fun watching it blow up.”

According to Smart, the players have been in “preliminary discussions” about another video.

“But some people want us to be a one hit wonder,” he said.

If not, the viral video world will miss them so bad, and they should know that.

—Staff writer Emily Rutter can be reached at erutter@college.harvard.edu.