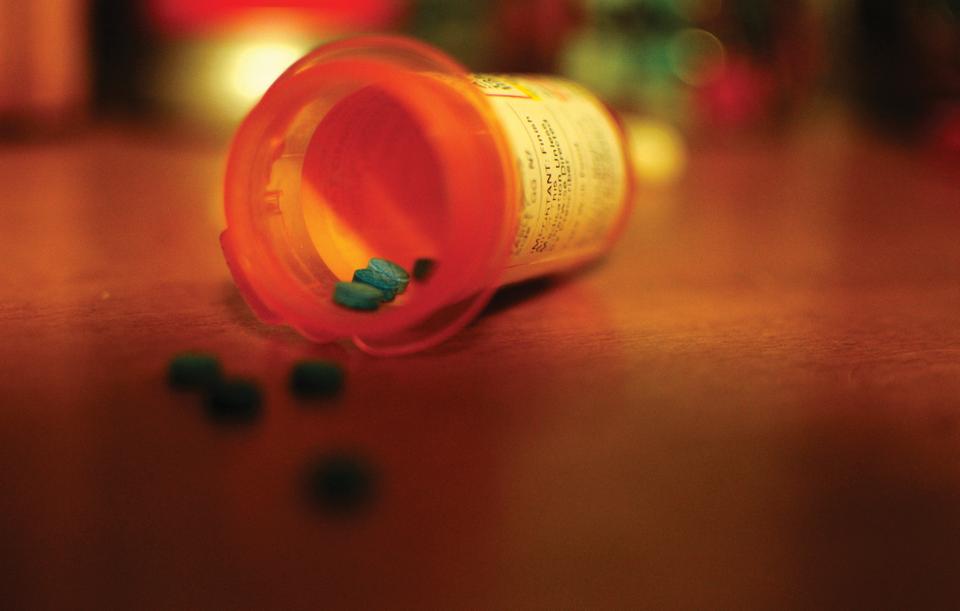 Adderall is typically prescribed for adolescents and adults diagnosed with ADHD (attention deficit hyperactivity disorder) and/or narcolepsy, but is on the rise in the underground drug scene, often abused by college students as a way to enhance concentration.
By Quinn D. Hatoff, Crimson Staff Writer

In preparation for finals, some students stock up on Red Bull. Others reload their Starbucks cards in anticipation of coffee-fueled nights. But for some students who sneak under the radar at Harvard, reading period entails a trip to the pharmacy or their entryway’s drug dealer.

Jessica, who asked that her name be changed for this article, takes an Adderall extended-release pill when she feels pressure to meet a deadline.

“I think of it as an escape route,” says the freshman. “If I get really desperate I have something that can save me.”

Jessica, who has not been diagnosed with an attention deficit disorder—the condition that Adderall is officially prescribed to treat—only uses the pills when she has a paper due the next day or a big exam to study for. Since she does not have a prescription, Jessica buys Adderall XR—usually at a cost of $5 per 20-milligram pill—from her peers.

Adderall XR came onto the market in 2001 and quickly passed Ritalin to become the most popular “study drug,” according to a 2006 study by Northeastern University professor Christian Teter.

As an amphetamine, the drug is classified alongside cocaine and opium as a Schedule II controlled substance by the Drug Enforcement Agency. But for harried students seeking improved concentration, alertness, and even a sense of euphoria, the threat of the law serves as little deterrent to taking the little orange pill.

A DARKER SHADE OF ORANGE

Bianca, another freshman whose name has been changed, reflects on her first experience taking Adderall soon after she started high school.

“It just felt so, so good,” she says. “Even though I couldn’t sleep, it felt awesome. After that I started taking it a lot. During the next two months, I took it every day.”

Bianca started using the drug to help her with her schoolwork, then came to rely on it more when she realized it doubled as a weight loss method. But she soon learned first-hand why Schedule II drugs including Adderall are considered to have a high potential for abuse.

She found herself hospitalized in ninth grade. Two months of daily use had taken their toll: her weight had plummeted from 130 to 94 pounds, and she had not had a full night of sleep in weeks.

“By the time I was actually hospitalized, I was kind of fucked up,” she admits with a slight laugh. “I wanted more weight loss—that was one reason for taking it—but I also had become psychologically dependent on it. I really loved it.”

Though she obtained her Adderall legally—she was diagnosed with attention deficit disorder after her parents divorced when she was ten—Bianca had saved her first bottle of pills, only turning to the drug in high school on the eve of a big paper deadline.

Before Bianca’s hospitalization, her concerned mother scheduled regular meetings for her daughter at an eating disorder clinic, but Bianca found ways to trick her doctors.

“I would stop taking the medicine two days before a meeting so that I would not have the amphetamine in my blood,” she recalls.

Bianca was able to quit Adderall after her stay in the hospital, but when college applications hit during her senior year she felt it was “really urgent” to finish everything in time. She returned to her doctor for a refill and was surprised by how easy it was to get the pills, given her history of abuse.

“He didn’t verify anything,” she says. “He gave me a ton of Adderall—over 90 capsules at a time. It was a really ridiculous amount, and I saved them all up.”

Soon Bianca found herself in a dangerous cycle: a pill in the morning would prevent her from sleeping at night, and she found the only way to avoid being tired the day after was to take more Adderall. When she came to Harvard, she brought a stash of more than 100 pills with her.

She stopped taking them after her boyfriend threatened to end their relationship if she continued.

“There are days when taking Adderall would be a smart choice for that day, when it really would make me so much more productive, but I think for me it has been a really good decision not to take it,” she says now.

Bianca sold her remaining pills for $250 to a fellow freshman—Jessica.

“It’s not something I use all the time, but it’s there for me to fall back on,” Jessica says.

SIDE EFFECTS MAY INCLUDE

“There is a prevailing notion that since doctors prescribe medications such as Adderall, that they must be safe,” University Health Services spokesperson Nanci Martin writes in an e-mailed statement. But despite this perception, Martin writes that stimulants like Adderall can cause cardiac problems.

But labels and doctor warnings fail to prevent some students from popping pills. Though statistics on Adderall misuse vary widely, studies show that prescription drug abuse occurs on campuses across the country.

The 2009 National Survey on Drug Use and Health found that 6.4 percent of full-time college students age 18 to 22 misused Adderall that year. The number did not include students diagnosed with an attention deficit disorder, even though experts claim that some students fake symptoms in order to get study pills.

Closer to home, a 2011 survey by the Boston Globe found that among an “informal sampling” of students at four Boston-area colleges, 15 percent admitted to taking prescription drugs, most frequently Adderall, for stress relief, increased focus, and other unintended purposes.

Peter, a junior whose name has been changed, worries that doctors might discover long-term effects in the future, even though his occasional use of Adderall has not produced any immediate side effects.

“There is no way you can take a drug to make your brain work at twice the speed and intensity as normal without having some consequences,” he says.

THIS IS YOUR BRAIN ON ADDERALL

Despite concerns about Adderall abuse, Stanford law professor Henry Greely argues that using prescription drugs to boost studying should be as commonly accepted as drinking caffeine.

Greely and his six co-authors said in a 2008 article in Nature that study pills like Adderall have “much to offer individuals and society.”

The article counters critics of study pills who charge that they are “unnatural” by pointing out that nearly every aspect of modern life—food, shelter, clothing, medical care—bears “little relation to our species’ ‘natural’ state.”

These drugs “should be viewed in the same general category as education, good health habits, and information technology—ways that our uniquely innovative species tries to improve itself,” says the article.

Peter disagrees. Even though he uses study pills to increase concentration, he admits that their use on college campuses gives students unfair advantages.

“Adderall is absolutely cheating,” he says. “Coffee and other natural stimulants keep you awake, but Adderall keeps you focused. I read an entire course’s assigned reading in a five-hour period. That is not natural. That was cheating.”

Jessica has a different take. “I don’t think it’s cheating to take study drugs,” she says. “But I do admit that I sometimes get annoyed with people who fake a prescription. They get extra time on tests, and I think a lot of people get prescribed Adderall knowing full well they do not have ADD.”

As Jessica knows from first-hand experience, Adderall’s power to increase focus comes at a mental as well as physical cost. The drug is known to impair creativity and alter thought patterns.

“The papers I write on Adderall are nowhere near the same quality as the ones I write not on Adderall,” she says. “They are wordy and convoluted. It’s like I can’t step back and see the big picture, but at the time it feels like I’m writing smart stuff.”

As Jessica puts it, “desperate times call for desperate measures.”