The Most Powerful Man in Cambridge

After more than 30 years as City Manager, Robert W. Healy leaves a long legacy of leadership 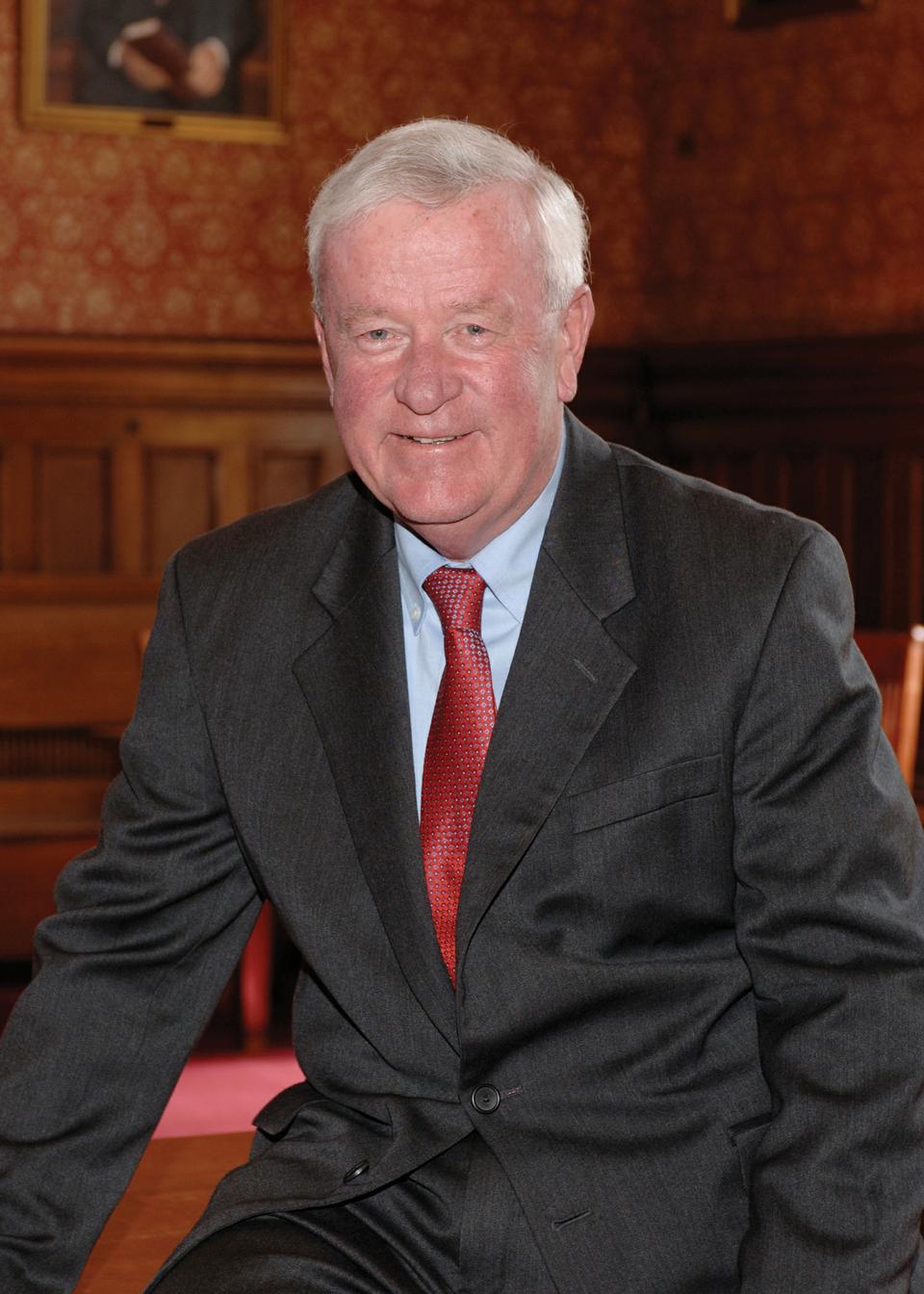 Robert W. Healy, who has served as Cambridge city manager for more than 30 years, leaves a long legacy of leadership behind.
By Mercer R. Cook and Maya Jonas-Silver, Crimson Staff Writers

For 31 years, Robert W. Healy has been the most powerful man in Cambridge.

As city manager, he has quietly and firmly changed the face of Cambridge from a city of shuttered factory doors to a thriving hotbed of technological innovation and research. Time after time, the City Council has willingly renewed his contract.

Through three decades of skillful maneuverings, mostly separated from the political fray, Healy has weathered municipal ups and downs in his efforts to maintain financial stability and promote human services.

He prides himself on blending conservative fiscal policy with liberal social values. “If you don’t have fiscal stability,” he says, “you aren’t able to provide an array of services.”

Now approaching his 70th birthday, Healy plans to bring his tenure as Cambridge’s chief executive to an close in June 2013.

As Cambridge’s other leaders turn to the task of replacing Healy, the city has begun to take inventory of the ingredients that made the longtime city manager so effective.

GOVERNMENT WITHOUT THE POLITICS

In Cambridge, the elected City Council hires a city manager, who oversees almost every facet of the municipality.

Since 1940, there have been seven city managers. In the 15 years preceding Healy’s appointment as manager, the average tenure for a manager was just under three years.

Yet over a period almost ten times as long, Healy has made remarkably few enemies.

“Most people that live in Cambridge are grateful to live in such a great city,” says Kathleen L. Born, a former Cambridge City Councillor. “And there’s no way to separate the city from the city manager.”

Carl F. Barron, who for many years served as the president of the Central Square Business Association, lauds Healy’s performance on the job.

“I think that he’s a top-notch, capable executive who is going to be very difficult to replace,” Barron says.

Talk of Healy’s success as the city manager is widespread, but some citizens have complained that the manager—who according to the Boston Globe makes more than twice as much as the next-highest-paid municipal manager in the state—is not worth the hefty cost of keeping him around. According to a report prepared by Cambridge Day and the Initiative for Investigative Reporting at Northeastern University, he made $336,317 in 2010.

Others are critical of the way he handled the years-long controversy over the firing of Malvina Monteiro, a city employee who claimed she was wrongfully terminated by Healy for complaining about racial discrimination on the job.

“I think it’s just indefensible what went on with the Montiero case,” City Councillor Kenneth E. Reeves ’72 told The Crimson in March, when he voted against extending the manager’s contract. “This is a way of doing business in government that I cannot support.”

But for the most part, Healy has managed to hold onto public favor for more than three decades. Sheldon Cohen, the former owner of Out of Town News who has been called the unofficial mayor of Harvard Square, attributes Healy’s longevity in office to his ability to stay out of the political crossfire.

“Bob is kind of above politics,” she says. “He, insofar as he could, tried to transcend the politics and squabbles on the Council.”

Sheila T. Russell, a former Cambridge mayor, recalls the city’s shaky fiscal situation when Healy took over, at a time when the state had just implemented a tax code that severely cut down the city’s spending money.

“The finances of the city were not very good,” Russell says. “He was able to bring us up to a triple-A rating.”

“He’s been unwavering about having a consistent and responsible fiscal policy,” Davis says. “‘If you want the things you say you want,’ he says to the us on the Council, ‘you have to be fiscally responsible also.’”

The financial strength and stability Cambridge has attained during Healy’s time as manager are undeniable. But some argue that the city’s strong economy stems from its good chance to be home to Harvard, MIT, and the vibrant knowledge-based industry that the universities draw to the area.

“The city is fortunate because it has major universities,” Born says. “There are definitely some physical and cultural assets that the city has. But I think what the city manager has done is to provide very, very steady leadership, and he’s helped the city capitalize on its assets.”

When asked about his contribution to the financial success of the city, Healy acknowledges that “it’s always better to be lucky than good.” But he also notes ways that his decisions have helped to shape Cambridge.

He recalls, for instance, the time that Novartis, one of the world’s largest pharmaceutical companies, was considering Cambridge as the location of its new global research headquarters.

“Their issue,” Healy says, “was that they needed to be able to occupy in 13 months. They had a timeline. I said, ‘We can do that.’”

Healy has also prided himself on keeping Cambridge property taxes low. According to Healy, the tax rate—$8.48 per $1,000 of property value in the 2012 fiscal year—is “really the lowest of any city in Massachusetts.”

“We have a very wide variety of human service programs available for people of all ages and all incomes,” he says proudly.

He also took an early progressive stance on gay rights.

“That might sound like a very ordinary thing now, but it wasn’t 15 years ago,” Born says. “His commitment to those issues is stellar.”

On the issue of affordable housing, his viewpoint comes from personal experience. His family was forced out of their North Cambridge apartment when he was 10.

“The landlord’s daughter was getting married,” Healy remembers. “A nice man, but he just came to us and said, ‘Well, my daughter’s getting married and she needs this apartment.’ So we were out. And long story short, affordable housing in Cambridge was hard to find in 1953. We wound up out in Billerica.”

Healy lives with his wife in Lowell today. One of his sons is a Harvard University Police Department officer and the other is a Boston attorney. But though he has not lived in the city in decades, he has worked to ensure that others who want to live in Cambridge can do so.

He serves as the managing trustee of the Cambridge Affordable Housing Trust, which he says has created about 2,700 units of affordable housing to supplement the units offered by the Cambridge Housing Authority.

Even in a city with a $700,000 median price for a single-family home, Healy boasts, “Well over 10 percent of the units in the city are considered or qualify to be called affordable.”

Harvard University President Drew G. Faust comments on Harvard’s relationship with the city manager. “He’s been a wonderful partner for Harvard,” she says. “It’s been a terrific relationship, and we’ll miss him a lot.”

Cambridge Public Works Commissioner Lisa Peterson, who has worked with Healy for 21 years, echoes those sentiments, but she also tempers them by emphasizing Healy’s encouraging nature, describing him as “very supportive”.

“When you go and talk to Bob about a proposal, you need to make sure you have all your information and have done your research,” she says. “He’s very fair-minded.”

Though he is an exacting boss, Healy demands an equal, if not higher, standard of himself. “He works very hard to understand the issues, and he has almost an encyclopedic knowledge about Massachusetts government laws,” says Robert P. Reardon, the director of the Cambridge Assessing Department. “He takes the opportunity to listen to everyone and get a full understanding of an issue from all different perspectives.”

Russell adds that Healy, whom she describes as “scrupulously honest,” was also willing to spend time explaining those issues to his co-workers.

When necessary, he pitched in not just in conversation but on the streets.

Peterson recounts that when a water main in East Cambridge ruptured in 2005, Healy plunged in to help instead of just delegating the clean-up.

She remembers Healy wading across the flooded street with rainproof footgear up to his thighs. “He can be a very hands-on person,” she says. “I think he’s really enjoyed that part.”

Reardon seconds that sentiment. “He’s very competent, and he definitely gets involved in the action.”

Noting that Healy “can be quite funny at times,” Peterson says he has an emotional side that is not always apparent while he handles city business. She points to the dedications of the Robert W. Healy Public Safety Building and the Robert W. Healy Scholarship as moments when Healy displayed such emotion, saying he was “enormously moved, enormously touched,” to have his contributions to the city recognized publicly.