Frank and Samberg Crack Jokes and Give Life Advice to Seniors 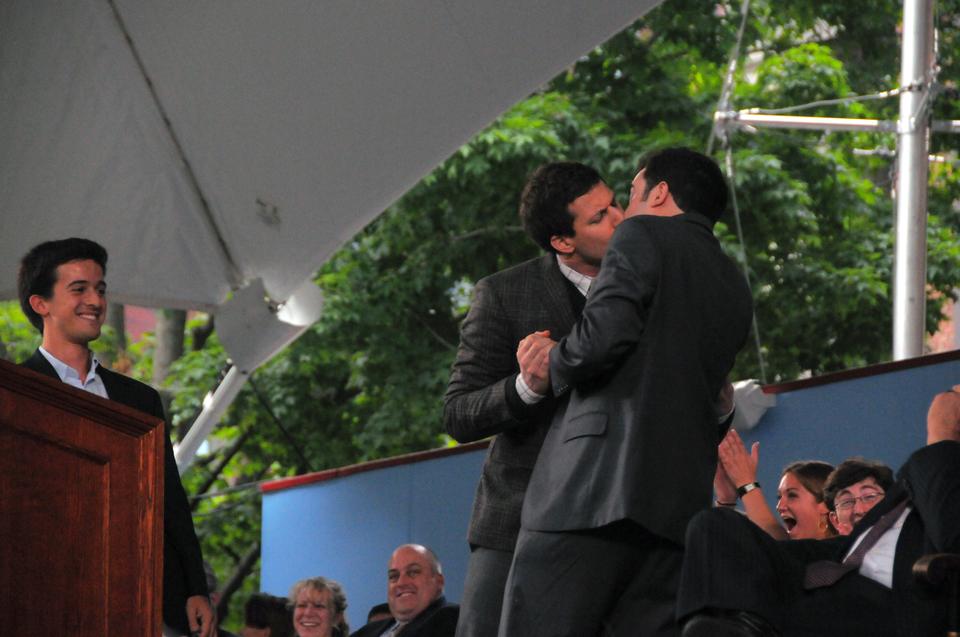 Ruminating on the origins of the Senior Class Day exercises-the event at which he was speaking- Saturday Night Live cast member Andy Samberg said, “Class day is a terrible name for a day where you don’t have to go to class, ever again. It’s like calling New Years Eve sobriety night.”

After being introduced by Senior Class Marshal Matthew J. DaSilva ’12, Samberg, wearing a tweed jacket and white Adidas sneakers, walked onto the stage in front of Memorial Church to the tune of Adele’s “Someone Like You.” When he reached the podium, Samberg stared into DaSilva’s eyes for several moments before moving in and giving him a kiss on the lips.

The kiss was “certainly not [planned] as of this morning,” said Matthew E. Whitaker ’12, one of the Class Day speakers, when asked whether he knew about the kiss in advance.

During his speech, Samberg, one of the event’s mostly highly anticipated speakers, lived up to his comedic reputation, making fun of Harvard concentrations and their applicability in the real world.

“All of those majors are now useless unless you can turn them into an iPhone app,” said Samberg.

Samberg also jokingly berated Dean Evelynn M. Hammonds, who was one of the first to speak at the event, for not offering him an honorary Harvard degree.

“I guess the old saying is true. Never trust Dean Hammonds,” he quipped.

In her speech earlier in the ceremony, Hammonds made jokes of her own as she poked fun at the Harvard Business School’s Commencement traditions.

“They have special cheers and special props,” she said. “The Business School people always throw money in the air,” she added, to much laughter.

Barney Frank ’61-’62, who was one of the day’s other guest speakers, used a similarly light tone to both share meaningful tips with seniors while cracking jokes.

“You will be invited to places where people will want to pay you tribute...by giving you something,” said Frank. “Never throw anything out within one mile of where it was presented to you,” he said adamantly.

Frank also suggested to students that in a time of easy communication through smartphones, Facebook, and Twitter, it is sometimes better to simply say nothing at all.

Jacqueline J. Rossi ’12, one of the event’s Ivy Orators, urged her classmates to “take pride in [their] lack of practical skills.”

Rossi took time in her speech to explain the process by which toilet water tanks are filled. “I just said ballcock in front of Barney Frank, twice,” she exclaimed.

In his speech, Whitaker tried to imagine what John Harvard would think of his name having such an influence in the modern world.

“‘Crikey,’ he might say if he were Australian, which he was not,” said Whitaker.

Despite the light hearted tone of the event, the ceremony took a moment of silence in the memory of Wendy H. Chang ’12 who died last month.

Both speakers, “close friends since freshman year,” according to Rossi, said that the event was an important way to bring together the Class of 2012 and reflect back on all that they had experienced together.

“[Class Day] was a great way to feel a connection with the whole class,” Whitaker said to the Crimson.