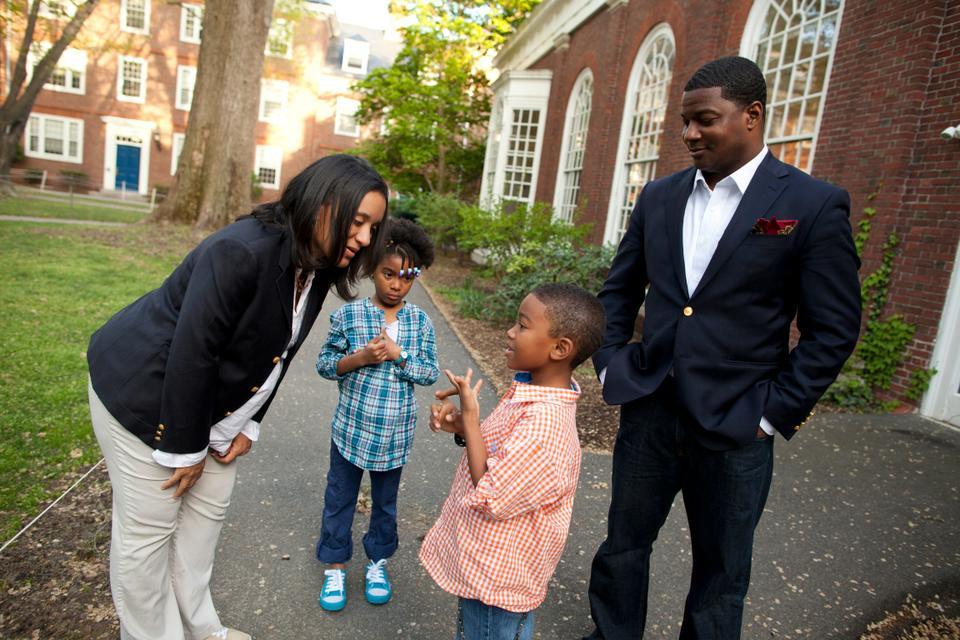 Minister Jonathan L. Walton poses with his wife, Cecily Cline, and children, Elijah Mays and Zora Neale, for a photo. Minister Walton aims to integrate the religious population into the greater Harvard community. By Courtesy of the Walton Family
By Jane Seo, Crimson Staff Writer

Resting atop a piano in the Lowell House Junior Common Room is a pair of purple velvet Versace slippers that once belonged to the late Reverend Peter J. Gomes.

Every time Jonathan L. Walton, a resident scholar in Lowell and the newly appointed Pusey Minister and Plummer Professor of Christian Morals, walks by these slippers, he is reminded that he will never fill in the shoes of Gomes, both literally and figuratively.

“Here I am, wearing my white Adidas,” Walton says, lifting his seersucker slacks ever so slightly to reveal pristine white sneakers. “There will never be another Peter Gomes.”

Instead of trying to be the next Gomes and “being a fool in the process,” Walton says he—as a minister, a scholar, and a father of twins with a third child on the way—hopes to integrate the religious community into Harvard at large.

“I have the vision of Memorial Church as the Sanders Theatre of moral and ethical question, a place where our doors swing on welcome hinges,” Walton says. “Everyone may not belong to Memorial Church, but Memorial Church belongs to everyone.”

Walton greets everyone he meets as brothers and sisters, shaking their hands with a firm grip and flashing a huge, genuine smile.

“It’s a Southern thing that extends from my Evangelical roots,” Walton says. “It is how I view the nature of humanity. I see all human beings as siblings under the parenthood of God.”

He previously served as the officiating pastor at Memorial West United Presbyterian Church in Newark, N. J., and guest-preached in Atlanta’s Ebenezer Baptist Church, which was once led by the Reverend Martin Luther King Jr.

At Harvard, Walton says that he hopes to convey the message that individuals should make “commitments to causes bigger than ourselves.”

“Love, justice, and service are not just abstract concepts and feel-good platitudes,” he says. “They are principles of a meaningful life.”

Walton’s interest in academic research and passion for interacting with students pulled him back to the ivy-covered towers of academia in 2010 as an associate professor at the Divinity School.

According to Memorial Church Epps Fellow Nathaniel P. Katz, who first met Walton in 2010, Walton charmed him not only with his willingness to talk to undergraduates about faith, but also with his ability to engage with the students.

“There is a lot to say about his faith, but also about things that extend far beyond faith,” Katz says. “He left an impression not just on me and my colleagues, but also on the students.”

Indeed, as a scholar, Walton says he relates to students’ anxiety about academic achievement.

Beyond his scholarly life, Walton is also a family man. His eight-year-old twins are named Elijah Mays and Zora Neale, after two admired figures: former president of Morehouse College Benjamin Elijah Mays and author Zora Neale Hurston. Walton says that he and his wife, Cecily, have decided to name their third child after novelist James Baldwin.

Having young children around changes the dynamics of his work and personal life, Walton says.

One Sunday, while shaking hands with the congregation after church, Zora was standing next to him, playing and ducking under his robes. In another incident, Walton and Katz went to a Harvard men’s basketball game against Brown in February, and Elijah tagged along.

“He is a great dad,” Katz says. “I would certainly love to have a dad like him.”

PATH TO THE PULPIT

Following Gomes’ death last year, President Drew G. Faust assembled an committee to search for a new minister. Walton originally served on the committee before he stepped down following his nomination for the post.

On April 25, Walton received a phone call from Faust asking him to come to her office. Walton thought that they were going to discuss someone else’s candidacy and that Faust was seeking his advice.

But Faust announced that he had been chosen for the position, and Walton’s mind just went blank, he says. “My face had to be like something from the Publishers Clearing House.”

In a statement, Faust said that Walton would “bring new life to spirituality and religion at Harvard.”

“He is among the country’s foremost scholars of African American religion, a powerful preacher, a thoughtful pastoral presence, and a wonderful human being,” Faust wrote. “His scholarly and ecclesiastical callings are mutually enriching in the best traditions of campus ministry.”

“I was tremendously pleased that he was ultimately selected,” Katz says. “Professor Walton is interested in finding ways to place the Memorial Church at the heart of campus life.”

After the initial excitement, Walton says the enormity of the position has humbled him.

“This is such a special community of faith within higher education,” he says. “I just have an enormous task in front of me.”

For Walton, the new position blends two things that he is passionate about: practicing ministry and pursuing religious scholarship.

“I can remain committed to the expansion of knowledge and also think out loud every Sunday with a community of faith about pressing concerns,” he says. “It is a perfect blend, a perfect hybrid.”

The job, however, does not come without challenges.

“My appointment can be a moment of mourning for many because it confirms the fact that Professor Gomes is no longer with us,” he says. “To move forward means to acknowledge the loss.”

Because Gomes has had such a long tenure, Katz says he recognizes that adapting to the different dynamic at church might be difficult for some congregants.

And to those who compare Walton and Gomes, Katz says that Walton was not hired to be Gomes. “We are hoping he will come in and be Jonathan Walton,” he says.

Despite praise for the appointment from officials across the University, Walton’s twin children were originally hesitant.

“They asked, ‘Does that mean we have to leave Lowell House?’” he says. Indeed, Walton and his family will soon move in to Sparks House, which was previous occupied by Gomes.

Though Walton says that he will miss the Lowell community that he has become a part of, he is excited by the prospect of meeting the broader Harvard community.

He says that he is uncertain whether to continue the Wednesday teas at Sparks House, a tradition started by Gomes in 1974 to offer students an opportunity to mingle with the church community. But regardless, he says that his doors are always open.

“I am a milk and Oreo kind of a guy,” he says. “But whatever it is, I want everyone to feel welcomed.”

As he prepares for a journey ahead of him, Walton remembers a quote that Mays used to share with his students: “Morehouse holds the crown over your head and challenges you to grow taller to wear it.”

“I honestly feel that Harvard has held this crown of Memorial Church over my head,” he says, “and I am hoping that, with the community’s support, I will be able to grow tall enough to wear it.”

An earlier version of this article misstated the middle initial of the new minister of Memorial Church. His full name is actually Reverend Jonathan L. Walton.