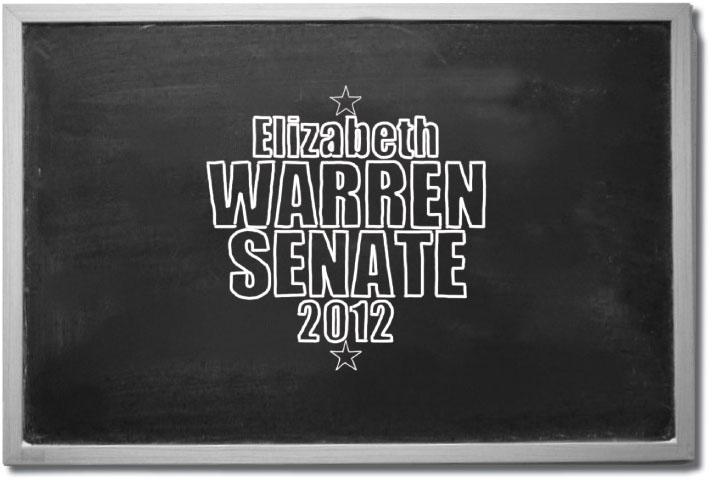 In March 2011, about 150 students from across Massachusetts flocked to Emerson College in downtown Boston for the annual College Democrats of Massachusetts convention.

On the second afternoon of the weekend-long summit, the undergraduates filed into a large lecture hall, awaiting the convention’s headliner, Harvard Law School professor Elizabeth Warren. As the U.S Senate candidate took the podium, the excited crowd erupted in applause.

Six months after declaring her candidacy for U.S. Senate and four months since taking a leave of absence from the Law School, Warren was back in the classroom—kind of.

Pacing back and forth at the front of the large lecture hall and gesturing to students in the audience, candidate Warren seemed more like Professor Warren on this afternoon. The lecture was politics 101, with great emphasis on how a smart girl from Oklahoma grew up to become a self-professed “fancy pants” professor at one of the world’s top law schools and later decided to run for U.S. Senate.

For those following her campaign, the story is now a familiar one. But Warren’s own telling leaves something out. Glossing over the time between her teenage years and Harvard, she neglects almost completely her meteoric rise through academia that landed her, in 1995, at Harvard and at the peak of her profession.

The road from professor to candidate has been a long one, filled with controversy and success. But by tracing her stepping-stones, the likeness between Warren today and the aspiring law student of 30 years ago becomes clear. As the 62-year-old has swapped out lectures for campaign speeches in recent months, the fixation of Warren the academic on bankruptcy and commercial law has become the Senate candidate’s platform to reclaim the middle class dream and a seat on Capitol Hill.

Academics like Warren are no strangers to politics. As advisers and appointed officials, professors often lend expertise to a perpetually fluctuating brain trust that waxes and wanes with the fate of each party. They are the force behind many of the commissions and agencies that make the government run.

Very few, however, actually run for office. In the past 100 years, the list of prominent professors who ran and won national office is brief, and the list of those who ran and lost is not much longer.

But if the nature of her profession alone makes Warren’s decision to run unique, her decision to build a campaign around the ideas that fueled her career has even less precedence.

Those professors who have run in Massachusetts, most notably H. Stuart Hughes and most recently Robert B. Reich, did so with little carry-over from their academic work and with little hope for victory.

The problem is that academia is notoriously difficult to translate into terms that non-academics can understand. Hughes largely side-stepped the issue by running for Senate as a candidate of the “New Left” in 1962 instead of as a professor. Reich embraced his academic past to a degree, but his political history was a stronger claim to legitimacy.

“People want to know relatively simply and straightforwardly what are the major points. You have to take the stuff that you would do as an academic and translate it into ways that are useful,” says G. Eric Brunstad, Jr., a visiting lecturer at Yale Law School who has co-authored with Warren.

According to professors who have worked with Warren at various points during her more than 30 years in academia, the skills and message Warren brings to the table is a useful one. Her experience, they say, does in fact lend itself to translation.

Warren is different from most of her Harvard Law School colleagues: She is one of only a handful of Ivy League professors who were not educated in the Ivy League themselves.

“Where she went to school, who she identifies with, her Oklahoma background—Liz is very much one of a kind,” University of Texas law professor Julius B. Getman says, adding that these distinctions may allow her to break the barrier into elective politics.

FIGHTING HER WAY UP

In 2009, when Warren was invited by her students to speak at Harvard Law School’s Class Day, she took the opportunity to state explicitly a message that she said was of utmost importance: Find work that you love. That message is, at least in practice, a defining aspect of Warren’s life, former colleagues say.

Warren’s ascent to the ivory tower was long and meandering and began on the lowest rung. The daughter of working class parents, she worked hard through high school and at age 16 earned a scholarship to George Washington University. She took time off from college but eventually graduated from the University of Houston in 1970. She went on to study at Rutgers School of Law-Newark, where she was editor of the law review and found her first teaching position.

As evidence of her growing reputation, in 1987 the University of Pennsylvania lured Warren and her second husband, fellow Harvard Law School professor Bruce H. Mann, to leave Texas. In 1995, Harvard recruited her from Penn. In less than 20 years, Warren had essentially climbed to the top of the tower. Those who worked with her along the way say she did it largely on her own.

“[W]hat was apparent from the beginning, she was a fighter,” Getman says. “Academics is filled with big and little battles, and it was clear Elizabeth Warren was a fighter.”

“You can tell people who are born to be law professors,” Warren said in a 1993 interview with The Crimson. “They think argument is the highest form of entertainment.”

Warren’s tough beginnings shaped the professor and researcher she is, says Texas law professor Jay L. Westbrook, who has co-authored several books on bankruptcy with Warren.

“I think it has made her an enormously well-rounded human being,” Westbrook says. “Even a lot of professors who are very concerned about the average person, it’s all from a distance, and for Elizabeth Warren it’s not. She really has a powerful sense of being an ordinary person who had opportunities and took them.”

A HARD LOOK AT REALITY

If Warren’s path to the Ivy League is unorthodox, so too has been her research in the fields of bankruptcy and commercial law.

Warren is an empiricist, who places more emphasis on the actual data than economic theory, something former colleagues say is quite rare. Even less common, Warren has made it her mission to make her findings accessible for those outside her cloistered profession.

“Her academic work is distinguished by actually looking at reality,” says Getman, who helped advise Warren’s research at Texas. “She was an empiricist before empiricism was cool, and she was a kind of empiricist who looked into the lives of everyday people.”

This kind of work, Brunstad says, flushes out much of the otherwise untested commercial theory favored by bankruptcy scholars. Often, the results are not what those scholars expected.

“There are some people who do it, but it takes a lot of time and a lot of resources. You never know exactly what you’re going to get when you strike out to do empirical work,” Brunstad says. For that reason most academics avoid empirical research.

With the help of Westbrook and others, Warren penned articles, textbooks, sourcebooks, and several popular self-help-style finance books. She became an expert on the middle class and the challenges facing its continued existence. Her approach to studying people was novel and her resulting work became the groundwork for legislative reform starting in the 1990s.

The work also planted the initial political seeds in Warren.

She saw a financial crisis coming for America’s middle class long before 2008. When that crisis came around, her background earned her a job with the Troubled Assets Relief Program and gave rise to the Consumer Financial Protection Bureau.

“She has spent so much time and effort trying to figure out what’s actually going on for the average person,” said Brunstad. “It’s the average guy that she’s the champion of, not any sort of elite group or something like that.”

A career identifying problems and injustices has led to a second career trying to fix them.

Even for professors like Warren whose work lends itself to the political process, the jump from academia to election politics is not easy. Warren’s transition has not been perfect, political analysts say, prone to the same mistakes made by first-time candidates.

“I see in her campaign the same problems that I see in every first-time candidate,” Democratic political consultant Michael Goldman says. “Unlike when you are selling a book and you are out there with a single issue, there’s nothing fair about campaigns.”

Political analysts and former colleagues say Warren’s teaching background may give her a leg up in overcoming the first-time hurdles. Warren’s role as a teacher is the essential style of her campaign, they say.

“She is a terrific teacher, and politics, for all of its downside, is in many ways a teaching process, trying to persuade people how things work in the world,” Westbrook says.

Warren’s teaching style is highly Socratic, built to engage students. When teaching first-year contracts classes, she employs a teaching assistant whose sole job is to make sure she calls on every student in the class at least once. That style, analysts say, works well on the campaign trail, and by all accounts Warren is good at it. At nearly every school she has taught, Warren has won the top teaching award. At Harvard, she has won it twice, which is unprecedented.

“She is certainly a natural teacher....The skill of explaining things to people in a way they understand it and get it, that is what brings together her teaching and her candidacy,” Getman says. “Most academics imagine that all you have to do is state something and people will understand it. Liz does not have that.”

Warren is more practiced in translating her work into clear and simple language than most academics, Linsky says, but she has still operated within a relatively cloistered world, and in almost every situation she has been the authority figure in the room.

The struggle to move beyond that authority—the interplay between her two identities and the transition from one to the other—will likely define Warren’s campaign and her chances of unseating Republican Senator Scott Brown.