Silence Reigns on Anniversary of 9/11 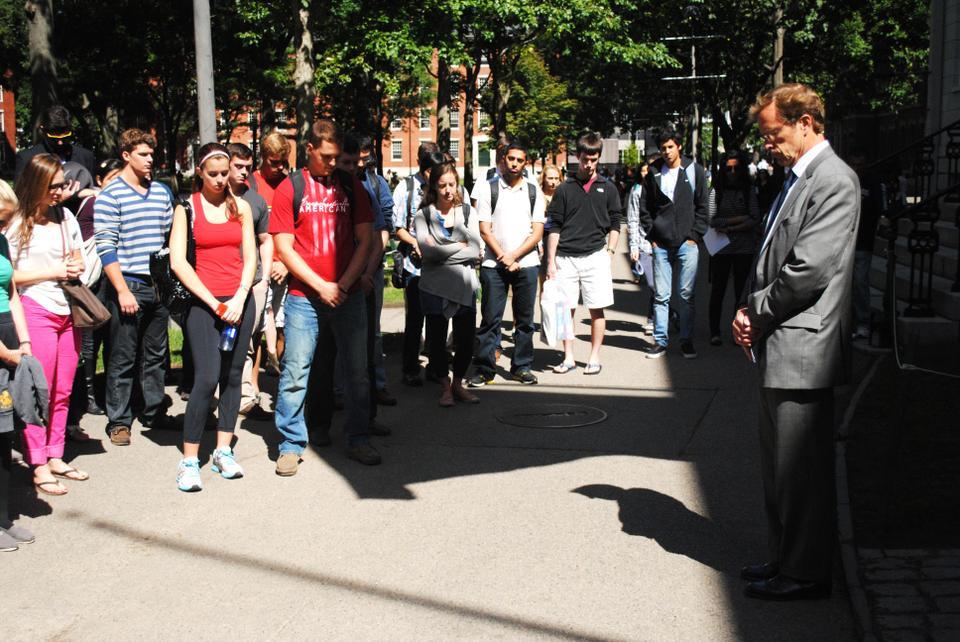 Dean of Freshmen, Tom Dingman, and students gather in the shadow of John Harvard and the American flag, as they remember the attacks on September 11, 2001 - "Let us bow our heads in a moment of silence".
By Kerry M. Flynn, Crimson Staff Writer

Amidst the stress of study card day, worries over the first assignments of the semester, and rumors about the high-profile cheating scandal, many students’ thoughts on Tuesday wandered back eleven years.

However, Chen had not remembered that the anniversary was approaching until that moment. “I completely forgot until today,” Chen said.

For others, the anniversary was a sober reminder of how their identities were defined for them.

“People have forgotten a bit, but it changed my life. It was hard being Muslim right afterward. In second grade, I was ashamed to tell people I’m Muslim,” Aniqa T. Hassan ’16 said.

Last year, students received an email from the College about a list of events commemorating the 10th anniversary of 9/11 the week before, but this year the day received less attention.

After not hearing about events happening on campus for that day, Peter G. Machtiger ’14, secretary of the Harvard College Veterans Engagement Initiative, took action.

Members of HCVEI, a student-run organization that plans service events and seminars for veterans, brainstormed ideas to commemorate the event, deciding to hold a moment of silence in front of the John Harvard statue.

“I thought the best and simplest way was having people come together as a community,” Machtiger said.

“Let’s think about the contributions that all of us can make by opening our minds and hearts in a bipartisan way,” Dingman said.

News about the moment of silence spread over House lists, but while the American flag hung high over the statue of John Harvard, the anniversary sat at the back of people’s minds.

Naji A. Filali ’14, a member of HCVEI, said he hopes the moment of silence will become an annual event at Harvard, though he said he thinks the tragedy is receding into memory.

“I think it will live on, to a point. It’s kind of like the Civil War—after some point in history, something bigger will happen, and 9/11 will become a bookmark in history,” Filali said.

However, the impacts of the event live on, whether it be in students’ personal lives or in the classroom. A new seminar in the government department looks at the legal implications of 9/11.

“What the course is trying to get at is how do the imperatives of national security, which change in different ways in each sort of era—how does the challenge of responding to those…then change some of our ideas about self-government,” said instructor Adam J. Lebovitz.

Andrew Jewett, an assistant professor of modern American history, said while September 11, 2001 left a major imprint on the nation’s psyche, much of daily life has continued as it was before.

“In some ways it changed us a lot, but in others ways it hasn’t. It hasn’t come home in many of the ways that past wars did. There’s a degree in which life has gone on around us,” Jewett said.