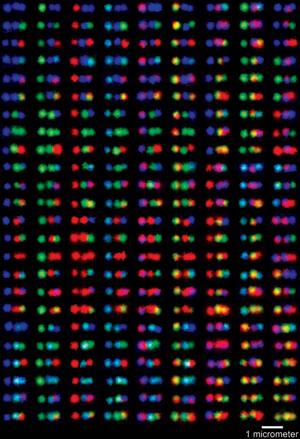 Thanks to the recent findings of a team of Harvard researchers, scientists can now view more than four microspecies at once using fluorescent microscopy—a development which will give scientists a fuller understanding of the samples they are examining.

Prior to this new research, scientists using fluorescent microscopy, which uses fluorescent light at a certain wavelength to make microspecies visible, could only assign a microspecies one color: either red, blue, or green, and sometimes yellow. Now, researchers will be able to assign multiple colors per sample. Labeled microspecies will look like multi-colored bar codes.

According to Yin, his team found 216 different possibilities of the colored spots’ arrangement, which could identify and locate different cell types, molecular structures, and parts of a cell. These barcodes have significant implications for the imaging community.

The finding will also affect the biomedical technology community as using multiple colors will facilitate DNA origami, a process that allows researchers to bend and bind DNA to other molecules.

“We can essentially use DNA joints to assemble the nanostructures into long rods, and we can modify the rods with fluorescence at different locations. We then use these tiny rods to arrange the fluorescent spots into colorful barcodes. Basically now using three or four colors, we can have hundreds of different barcodes,” said Yin.

DNA origami is an important and “wonderful tool,” said Yin, who began to study and develop the technology in the spring of 2010, shortly after he joined the Wyss Institute.

“The landscape of its potential is tremendous—from helping us to develop targeted drug-delivery mechanisms to improving the scope of cellular and molecular activities we are able to observe at a disease site using the latest medical imaging techniques,” he wrote.

Although the research team published their findings, the fruit of years’ worth of labor, the scientists hope to further develop this technology to make it more compact. They are considering different barcoding structures as well.