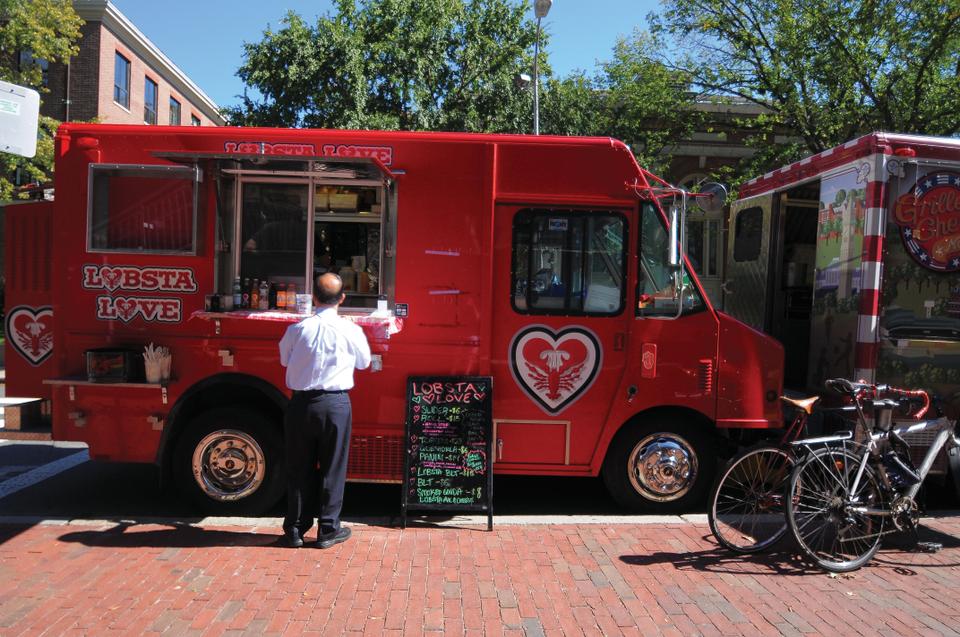 Due to the construction in front of the Science Center, food trucks such as Lobsta Love have now been forced to relocate behind the Science Center, where they are crammed in between traffic and other cars.
By Kerry M. Flynn and Maya Jonas-Silver, Crimson Staff Writers

If you haven’t seen the food trucks or walked through the Harvard Farmers’ Market this year, you’re not alone. Just a year after food trucks first appeared in front of the Science Center, construction on the plaza has pushed the trucks and the farmers’ market to a less-frequented spot behind the Science Center on Oxford Street.

“In terms of business, it’s lousy. It’s nothing like the old location,” said Dave J. Purpura, who owns Plato’s Harvest, a farm in Middleboro, Mass.

“It’s a huge chunk of my sales for the year,” he said. Purpura attributed the decline in sales to the new location, in front of the Harvard Museum of Natural History, which sees less traffic than the Science Center plaza.

Some students, such as David K. Peprah ’15, used to patronize the food trucks but are less likely to do so now because of the new location.

“I don’t ever see them,” Peprah said.

Purpura said that some of his regular customers—people he said he has come to know by name over the years—no longer frequent the market.

“It doesn’t seem well-promoted,” Purpura said. “It doesn’t really seem like Harvard has a stake in this.”

The farmers’ market at Harvard began as a part of the Harvard University Dining Service’s Food Literacy Project and has been happening annually since 2005. Last year, Harvard Campus Services sought to expand its food options for students by signing contracts with several food trucks. The food truck project also supports the University’s Common Spaces program.

Kickass Cupcakes, a cupcake company based in Somerville, often parked a ood truck at the Science Center location last year but decided to withdraw from participating this year due to the construction.

“We secured a lot of sites in downtown Boston. With just one truck, we didn’t have a lot of availability to be at Harvard, and we were worried about the construction,” said owner Sara Ross.

Other trucks, however, have chosen to stay. Under new ownership, Lefty’s Silver Cart will be stationed at Harvard on Friday afternoons through October. The truck offers vegetarian food only, but expanded their options from last year to include more speciality sandwiches.

The previous owner, Philip Francis, attended the Divinity School and enjoyed participating in the program, according to current owner Erynn O’Neil.

“[O’Neil] had a great relationship to them and a personal tie. The place has a great vibe, and the College is full of younger people and staff that are into vegetarianism. They’re a little more open than a random street corner,” said O’Neil.

Both the food trucks and the farmers’ market will return to the Science Center plaza in the spring of 2013 after construction is completed, according to University spokesperson Lauren M. Marshall.

—Staff writer Maya S. Jonas-Silver can be reached at mayajonas-silver@harvard.edu.