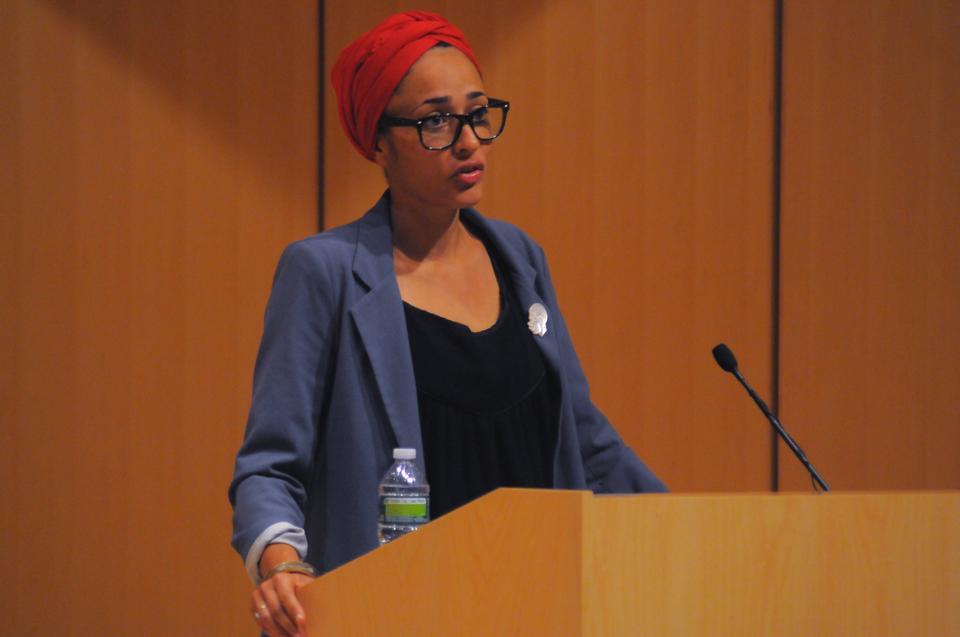 Zadie Smith, author of “White Teeth” and “On Beauty,” visited the Cambridge Public Library last week to read from her new book, “NW.”
By Marina Molarsky-Beck

Zadie Smith, author of “White Teeth” and “On Beauty,” visited the Cambridge Public Library last week to read from her new book, “NW.” A half hour before Smith was slated to speak, the library staff was shepherding the overflowing crowd into a second room from which they could watch the event live on screen. Several floors above the chaos, in an office at the end of a labyrinthine corridor, Smith sat down with FM.

1. Fifteen Minutes: You said recently that you consider “NW” to be the first book that you’ve written as an adult. And it’s stylistically very different from your previous novels. Could you tell me anything about where you think you’re moving to—or maybe away from—as a writer?

Zadie Smith: I don’t know. I don’t really think of it that way. The funny thing is, when I was writing it I didn’t think of it as that different. You know, when you’re within your own consciousness and your own mind, it’s all you. So I didn’t see it as such a different approach. And actually I noticed when I read it out loud, people think it sounds just like my other fiction. The way I think of it, the way I read it, it’s quite naturalistic but people are sometimes thrown—I’m surprised at how much…the way things look on a page makes so much of a difference to the way people read. So I don’t think I’m moving away from anything. To me, each novel is quite different…. “The Autograph Man” isn’t much like “White Teeth,” so they’re all different. I try and interest myself, which I guess means moving forward or backward or I don’t know what direction, but moving, anyway. I can’t imagine writing the same thing over and over.

2. FM: In a 2011 interview in Harper’s Magazine, you spoke about how you had ti actually walk around Harlem to understand and appreciate the prose in “Harlem is Nowhere,” by Sharifa Rhodes-Pitts. You’ve written primarily about Northwest London but you’re now living part-time in New York, and you were here in Cambridge for a while. Do you think that had any effect on your writing?

ZS: Yes, I mean, place does mean a lot to me one way or another. I wanted to try and be honest to what my sense of living in a city is like—living in a modern city. So that’s part of the reason for, I suppose, the fragmentation or the disconnection in parts of the novel. Also, because I like the idea of gaps. I find it quite oppressive, when I’m reading, to have every single detail filled in, as if your imagination is kind of colonized by this other person, the writer. I like to have a bit of space. And you know, to survive in Northwest London or any busy city, you have to do quite a bit of improvising—you know, quite a lot of quick moves. I wanted to try and replicate that. And Sharifa does such a good job of that in her Harlem book; there is a kind of dreamy atmosphere in Harlem, and a sense of constant intrusion of the past on the present. Reading it, I understood it, but when I was physically moving through Harlem, I really saw how accurate she’d been to the atmosphere of the place.

3. FM: In your writing, you talk about families as collective entities. There’s a line in “NW” where you refer to the character of the Caldwell family with the phrase, “a Caldwell assumption.” Does family define identity for you? Where does this pattern come from?

ZS: I suppose I think of families as mini-societies, you know: repressive, sometimes dictatorial, hard to live in, sometimes very freeing. Some families are very healthy. But most families, I think we can all agree, are not particularly healthy. It’s not a very healthy structure, just because you’re forced to live with people that you really don’t know from Adam. It’s a kind of accident that you’re thrown into a living arrangement with them. So that situation always strikes me as quite comic. Obviously it can have tragic aspects in its extreme manifestations, but for most people, the pain of family is quite funny. I have an example: Today I was on the train and there was a woman about 65 years old or 70 phoning all her various siblings to discuss what was going to be done about mother, for a series of arguments with the various siblings. It was very political. It was like watching a kind of, you know, international negotiation. She would phone and say to Sharon, “I’m not trying to suggest we do this, but we might do this.” She’d phone Ian, and then finally, toward the end of the call, I was really wondering, who was this ogre mother? Then she phoned [her] mother, who was obviously like 98, and I heard her say to her mother, “Yes, Mom. Yes, Mom. Well, you’re going to your final, most important journey, Mom.” It was awful, but you know, it takes a lot of negotiation to live in a family.... And everyone keeps on saying that they love each other, but there are all kinds of anxieties and envy and stress underneath the surface. I think that’s perfectly normal, but it just seems to me more interesting than writing about romantic love, for example.

4. FM: Changing directions a bit, you recently wrote a profile of Jay-Z in The New York Times Magazine, and you’ve mentioned music in your writing. What’s your taste in music?

ZS: Well, I am a long-term hip-hop fan, and then apart from that, I like show tunes, I suppose. Somebody said in my college yearbook that I had the worst taste in music known to man. Maybe that’s true. I like a lot of thirties, forties musicals and jazz, a lot of torch singers, a lot of black women singers—vocalists—I guess that’s what I’m interested in, and hip-hop. So voice, I guess, is what connects all of them. I like people with voices. I don’t have much time for indie rock. It’s not the way I was brought up. So I like black music, I suppose, in all its variation.

5. FM: You wanted to be an actress in musicals when you were very young.

ZS: When I was a very small child, the same way that people want to be firemen or astronauts. It wasn’t really a serious ambition. But that’s what I did, you know, it was my hobby as a child. I sang and danced, that was my thing.

7. FM: Has that made you think about writing any differently? Are you teaching creative writing?

ZS: I teach in the Creative Writing department, but I actually teach literature. I teach novels, and my students write me essays. I’m aware that they want to write fiction, but we don’t really discuss that or go into it. I don’t read their fiction, and they’d never give it to me—only because that’s the way I was taught. I never took a creative writing course, I took an English degree. So as far as I’m concerned, that’s the most useful route to writing. I can only teach what I know. I don’t know how to do a workshop. I have no experience of that kind of thing, so I don’t do it.

8. FM: You have mentioned that you thought, when people were reading your novel “On Beauty,” they might think, “Oh, she came from an upper-middle class family in a university town,” which is not what your experience was like at all.

ZS: A lot of people do assume that. I didn’t realize that until [my book] came out. I’ve read lots of reviews which took it as writ that this was my experience, which was funny. But nobody thought I was a Jewish-Chinese man when I wrote “The Autograph Man.” They were convinced by Zora [a character in “On Beauty”], I guess. No, it couldn’t have been further from my own family and my own experience, but it was fun to write for that reason. It was fun to imagine what it would be like to come from an intellectual family. But it really just came from the realization that when I was a kid I was so curious about those kind of families, because you always thought, “Well, if I was a writer in a family like that, I could sit at the breakfast table discussing my novel with my father. Wouldn’t that be interesting?” And of course you meet people who are born in that situation, and they tell you it’s living hell. I found that very illuminating. I never understood that a family of that kind would have its own difficulties. As a child I didn’t realize it at all.

9. FM: What was your experience like coming to Cambridge after having a working class upbringing?ZS: My Cambridge or your Cambridge?FM: Your Cambridge.

ZS: It was a shock. I was one of about three black girls, I think—at least that I ever saw.

[A booming loudspeaker announcement silences Smith: “Attention! Now is the time to go to L2 if you have a blue ticket. We will be closing the door to the auditorium in approximately four minutes. If you’re holding a blue ticket, to ensure your seat for Zadie Smith, please come straight to L2 now. Thank you.”]

ZS: What was I saying? Oh, Cambridge. I know those three black girls, actually. Naomie Harris was one of them, the actress; a girl called Danielle Allen, who became Dean [of the Division of Humanities] of [the University of] Chicago. A lot of the black girls I knew who went there said that they really hated it and found it very stressful, and I can completely comprehend that feeling. Cambridge is not just one university, it’s a series of colleges, and they have quite different characters. I think if I’d gone to Trinity or John—or in fact, practically any other college in Cambridge—I would have found it very painful and hard, but it happened that I was advised—correctly advised—to go to King’s, and King’s is a college the intake of which is mostly North London kids—not from my background, Jewish kids, lower-class kids, but kids that I had some familiarity with. I knew them from the streets, I knew them from parties. I was familiar with those kids. So it wasn’t so strange to me, because they were London kids, so I knew what I was dealing with.

10. FM: The characters in your books are from all sorts of backgrounds. It seems like you’ve spent a lot of time getting to know people.

ZS: Well, in my line of work it’s hard not to meet a lot of people, one way or another, and they tend to be from different parts of the world. Also because, you know, your life moves forward, but where you came from stays the same. So you’re constantly involved in these kind of juxtapositions.… A lot of my life, when I’m back in London, it’s very the same. So I feel like I’m still in touch with a lot of what I came from. But obviously, living in Manhattan is a long way away—a different culture entirely. But that’s always been my life. Straddling things.