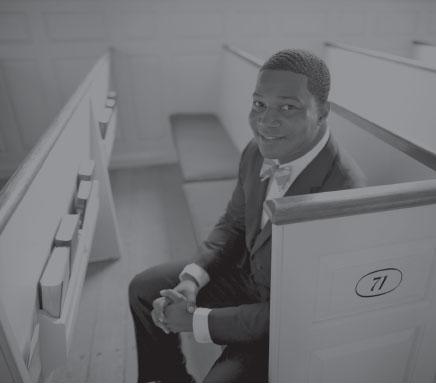 Reverend Jonathan L. Walton, Pusey Minister in Memorial Church and Plummer Professor of Christian Morals, sits in his crimson-walled office, wearing a black suit and royal purple shirt. Walton was appointed in April 2012 to the position previously held by the late Reverend Peter J. Gomes. Tributes to his sports fanaticism decorate his office: A basketball signed by Tommy Amaker sits atop one of the bookshelves. FM munched on some peanut M&M’s with Walton, and talked about Memorial Church air conditioners, tailgates at Sparks House and his 3-month-old son Baldwin.
By Matthew M. Beck

Reverend Jonathan L. Walton, Pusey Minister in Memorial Church and Plummer Professor of Christian Morals, sits in his crimson-walled office, wearing a black suit and royal purple shirt. Walton was appointed in April 2012 to the position previously held by the late Reverend Peter J. Gomes. Tributes to his sports fanaticism decorate his office: A basketball signed by Tommy Amaker sits atop one of the bookshelves.  FM munched on some peanut M&M’s with Walton, and talked about Memorial Church air conditioners, tailgates at Sparks House and his 3-month-old son Baldwin.

1. Fifteen Minutes: Again, congratulations on the new position! A few months into your duties as Pusey Minister, do you finally feel that you have settled into this new role?

Jonathan L. Walton: I’m learning that this is a marathon, not a sprint, and I’m trying to keep that in mind. I’m having a wonderful time, and the people and the community have been so supportive. And I think that’s made all the difference.

2. FM: What psalm do you think would be most appropriate to describe your current state of mind as Minister?

JLW: “Psalm 121.” It’s the psalm that says “I would look to the hills from whence cometh my help. All of my help comes from the Lord.”

3. FM: What is its significance for you?

JLW: My prayer life has been enriched by being in this position. I go to bed every night just thankful for all that I’ve been given. So I’ve really been looking to the Lord both for sustenance and in appreciation.

4. FM: Surely there have been some surprises along the way—what have you encountered that you didn’t expect when you accepted the position?

JLW: I’ve been surprised by how busy everyone is at this University, waking up every day and looking at my calendar and seeing that I’m running from meeting to meeting. I thought I was busy before as a member of the faculty, and I thought I was busy if I couldn’t get three hours of reading in or two hours of writing. Now if I have 15 minutes to take a break, that would be a surprise.

5. FM: With such little time on your hands, what do you do for fun?

JLW: I’m an avid sports fan, and I’m an avid Harvard fan. For the past couple of years here, I’ve been a season ticket holder for the football games, the basketball games, and the women’s volleyball games. I’m a huge women’s volleyball fan here at Harvard. And so that’s what I do. Every Saturday of home games, you’ll find me over at the stadium cheering on the Crimson. You’ll find me Sunday afternoons sitting in front of the TV cheering for the Atlanta Falcons.

6. FM: Is that something that you and your family do together?

JLW: We’re all huge sports fans: Cecily, my wife, the twins, and even little Baldwin—my baby three-month-old—he has a little Harvard t-shirt. Now that we’re getting settled, in the next few weeks—for the football games and leading up to basketball—we’re going to start tailgating at Sparks House.

7. FM: Sounds like a good time. I imagine that you must be a very proud father of your new little one.

JLW: He’s beautiful. Beautiful. That’s all I can say. We’re blessed. We’re looking forward to raising him and the older kids in this wonderful community.

8. FM: So you moved into Sparks House over Labor Day weekend—how has the adjustment been? Do you miss Lowell?

JLW: Oh, of course we miss Lowell. The kids are begging every night at dinner time to go back to the dining hall. Not only are they upset with my cooking, but they really miss the fellowship with students over at Lowell. So, we’ve tried to head over and dine with some of the students at least once a week.

9. FM: What do you think of the new paint job at Sparks House?

JLW: I’m happy with it. The Cambridge Historical Society wanted to restore its original color and make it historically appropriate. And I think that it blends in perfectly with the community. I think it represents, you know, my family’s personality: We just want to blend in and be part of the community.

10. FM: Between the paint job and the ending of the Wednesday Tea tradition that Gomes had started as Pusey Minister, do you think that Gomes’ s legacy on the Harvard campus has been diminished? Some people have said that now that they don’t see the yellow, they feel as if Gomes is really gone.

JLW: Gomes was so much more than a canary yellow paint job. His words of wisdom, his many publications, all of the students that he touched, all of the fond memories that people have of his sense of humor—that’s who Peter Gomes was. That’s his legacy. So a canary yellow paint job and a weekly tea—all of those things were part of him, but they did not “represent” him to this community. It was his intellectual and spiritual legacy, not this kind of aesthetic façade.

11. FM: Was that, then, the motivation behind creating MemChurch Café—as a sort of replacement for Wednesday Tea? Has there been a strong turnout now that it’s coming out of its incipient weeks?

JLW: I wouldn’t say that MemChurch Café is replacing weekly tea. I think weekly tea, from my understanding at least, kind of ran its course even before my appointment. So much of that was bound up with Peter’s hospitality and his home and his charisma. So, the weekly tea belonged to him. When he was taken out of the mix, as I was told, numbers really dropped. What we’re trying to do here now is to find new exciting and creative ways to create community, and Memorial Church Café just happens to be one of them. Just as I said earlier, I hope one of those things is our regular tailgates at Sparks House. And I think that’s something that’s more representative of my family. So I never want to think of things as “we’re replacing something that was before,” but rather that we are a living organism and we develop and change and grow.

12. FM: Of these new and exciting developments, what has been your favorite part of the job so far?

JLW: The people that I’m able to meet. I’ve been on this campus for three years, and in a week I’ve probably met more members of the Harvard community than in the previous two years. That’s really exciting because there are just such cool, smart people here. I find that I have to leave earlier now for meetings because I just want to stay and talk to everybody. To hear about where students come from, what they’re majoring in, what activities they’re involved in—that’s been the best part for me.

13. FM: What do you hope to accomplish over the course of your freshman year leading Memorial Church?

JLW: Letting everybody know that everyone may not belong to Memorial Church, but Memorial Church belongs to everyone. We belong to you, no matter who you are, no matter your religion, no matter your concentration. We may not be your cup of tea on Sunday morning, but hopefully, whether it’s for morning prayers or other activities that we hold during the week, this is a place where people can come, and recharge, and become a part of a larger community.

14. FM: You seem so excited to be here, how do you maintain such exuberance?

JLW: You know, I’ve never understood Christians who say they have the joy of Jesus and the love of God in their souls, and yet they always look like they’ve been sucking on a lemon. Somehow, spiritual depth takes on a somber tone. I don’t get that. I wake up every morning excited and happy about the opportunities that I have had and that God has provided me with. Why wouldn’t I be smiling?

15. FM: By the end of your time as Pusey Minister, what sort of legacy will you hope to have left?

JLW: For one, I told President Faust that I think I will be a success here if we are able to name the Jonathan L. Walton Memorial Air Conditioner so that students will not have to sit through another baccalaureate exercise sweating through their robes. That will be a success. But, also, at the end of the day—whenever my time comes—if people would just say, “he cared about us, he cared about students, he cared about their well-being.” If that’s on my tombstone—“He Cared.”—I would be happy.