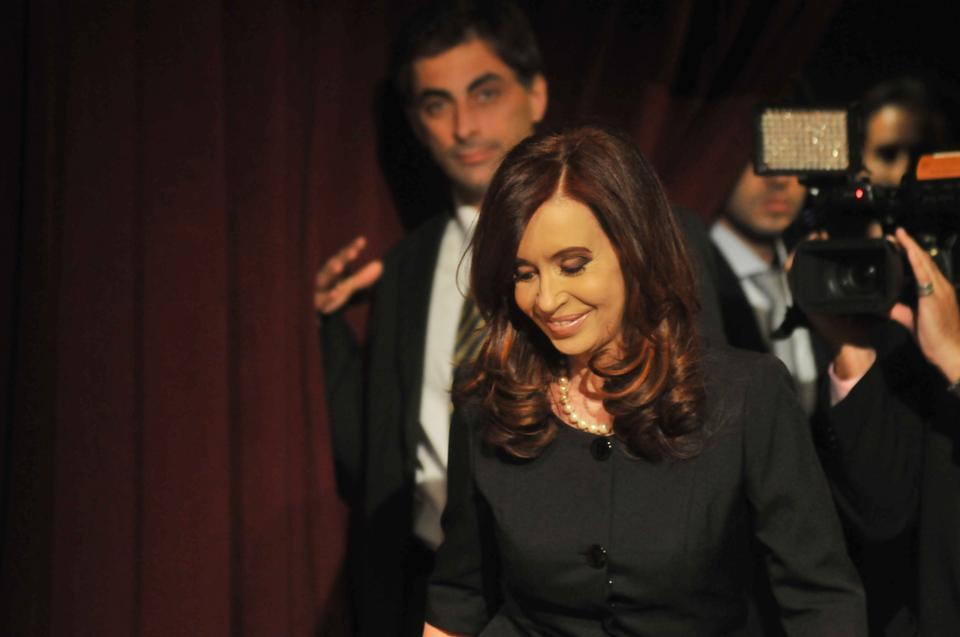 President of Argentina Cristina Fernandez de Kirchner enters the JFK Jr. Forum on Thursday evening. During her lecture, Kircher touched on the controversial policies that she has supported as President, including Argentina's growing protectionism.
By Sagar Desai, Crimson Staff Writer

President Cristina Fernández de Kirchner, the first woman to be elected president of Argentina, faced tough questions from students at the Institute of Politics on Thursday.

Delivering her speech in Spanish, Kirchner argued that her administration has largely been a successful one. She noted accomplishments such as the establishment of the Ministry of Science, Technology, and Productive Innovation and the recovery of Argentina after both the 2008 economic crisis and the recent European sovereign-debt crisis.

“The minimum wage of our workers is the highest in Latin America,” said Kirchner, whose speech was translated for English speakers. “The same-sex marriage law—we take pride in being the first country in Latin America. To do this fills us with joy,” she added.

Kirchner was first elected president of Argentina in 2007 and then again in 2011. She followed her husband Néstor Carlos Kirchner, who had served as president from 2003 to 2007.

The hopeful tenor of her address, however, stood in stark contrast to the tense atmosphere that ensued. During the question and answer session, students, many of whom were of Argentine, El Salvadorian, Venezuelan, or other Hispanic descent, grilled Kirchner and pressed her to respond to allegations.

Kirchner gave an unwavering defense of her presidential administration, which has often been lambasted by the Argentine press, but students repeatedly asked the Argentine president to be more “self-critical,” as one audience member put it.

“I feel highly privileged to be one of the few Argentines who can actually ask you a question,” said another audience member, referring to the acrimonious relationship between Kirchner and the press. Many claimed that Kirchner has been very unresponsive to the media and that she neglects to respond to concerns from her constituents.

“We’re at Harvard. Come on, please. Those things are not from Harvard,” Kirchner responded, according to the translation.

“If I didn’t talk to people, then why did they re-elect me with over 54 percent of the vote? You’ve got academic standards. You can’t repeat what two or three journalists write. Let’s stop talking about what the media says. Because now it’s an opposition media,” she added.

In light of this criticism, Kirchner refused to let Harvard Kennedy School Dean David T. Ellwood ’75 end the question and answer session and instead encouraged the students lined up at the microphones to continue asking their questions.

Other students came to the podium and asked her about claims that her personal wealth had drastically increased during her tenure in office.

“I don’t know where you got that from but that’s not the case. I have a certain economic position which is the result of working all my life as a successful lawyer. And now I’m a successful president,” answered Kirchner.

—Staff writer Sagar Desai can be reached at sagardesai@college.harvard.edu.

An earlier version of this article incorrectly stated that Néstor Carlos Kirchner was barred from running for president of Argentina in 2007 after his first term in office ended. In fact, he voluntarily stepped down after one term, and his wife then ran for the presidency.