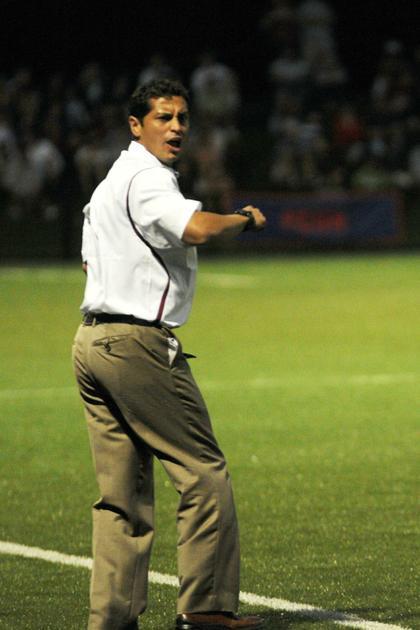 Harvard men's soccer coach Carl Junot told his team earlier this week that he was stepping down from his position after three years at the helm. He went 10-30-11 in those three seasons.
By Jacob D. H. Feldman and Michael D. Ledecky, Crimson Staff Writers

Harvard men’s soccer coach Carl Junot announced his resignation Tuesday after three seasons at the helm of the team, including the most recent 2012 season that saw men’s soccer go 3-11-3 and finish last in the Ivy League with a 0-6-1 conference record.

The Athletic Department said in a Thursday press release announcing the news that it had already begun a national search for Junot’s replacement.

In an email sent to his team earlier this week, Junot wrote that although he planned to step down his assistant coaches would remain with the team for the rest of the year.

“It was obviously a surprise to hear over break,” said men’s soccer player Joseph C. Kearney ’14. “Everyone was preparing for spring season.”

Director of Athletic Communications Kurt K. Svoboda said in a phone interview Thursday that he was “a little surprised” by Junot’s resignation.

“He was here just this weekend. I didn’t talk to him, but everything seemed on the up and up,” Svoboda said. “I was just notified of this.”

Before assuming the head role, Junot served as an assistant coach for the Crimson from 2008-2010. Junot finishes with a record of 10-30-11 as head coach.

In a statement, Director of Athletics Robert L. Scalise praised Junot’s contributions to the program.

“Carl leaves a strong legacy of community service through our spring game [versus] Haiti, and an unquestioned commitment to the student-athlete experience,” Scalise said. “We wish him well in his future endeavors.”

Obiajulu C. Agha Jr. '14, a men’s soccer player, said that after the team’s struggles he has mixed feelings about the coach’s resignation.

“We haven’t had the best last three seasons," Agha said. "I like Junot as a person—he’s done his best to help me with things outside of soccer—so I’ll miss him as a friend and as coach, but I do think it’s time to take things in a new direction."

But Connor P. McCarthy ’14, also a member of the team, said that Junot has helped set the stage for future success from men’s soccer.

“We’ve definitely made a lot of strides as a team under Carl,” McCarthy said. “We’re all disappointed to see him go, but we can move forward and build upon the foundation he has set.”

The department and Scalise could not be reached for further comment, and Junot declined to comment on this story.

—Staff writer Michael D. Ledecky can be reached at mledecky@college.harvard.edu.