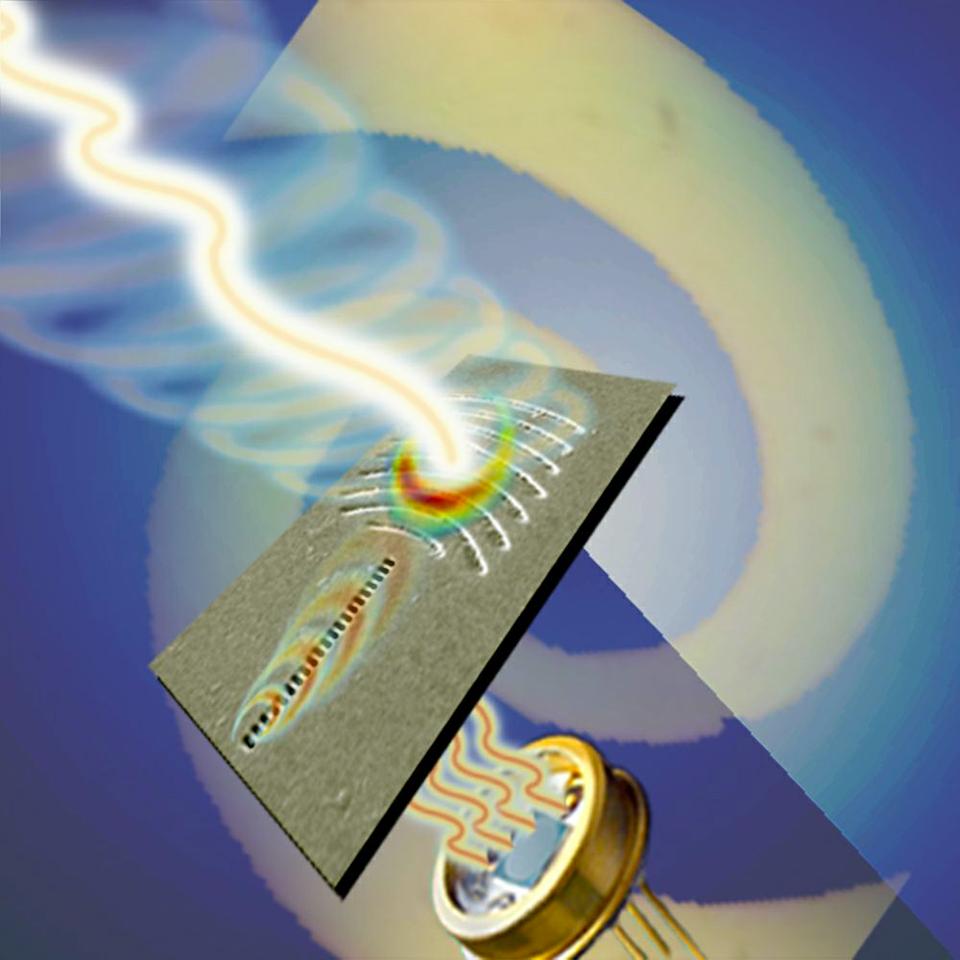 This illustration (not to scale) simulates the process by which an incoming complex wave can be identified and transmitted to a photodetector.
By Brian C. Zhang, Crimson Staff Writer

Applied physics professor Federico Capasso remembers the emergence of fiber optics vividly—he was working at Bell Laboratories when the research institution performed the first industrial tests of the technology forty years ago. Fiber optics quickly gained prominence in the subsequent years as a more robust way of sending information with light instead of electrical signals.

Today, Capasso and his colleagues are researching what could be the latest breakthrough in fiber optics technology: the vortex beam, a special type of light that twists as it travels. Capasso said he believes that the twists in a beam could potentially increase the information capacity of a single fiber many times over.

In a paper published in Nature Communications in December, Capasso and his team describe a new device that can detect the “twistiness” of vortex beams. Although other devices capable of sensing the twist of a vortex beam exist, they are bulky and expensive, Capasso said.

“We took a commercial device that cost around 20 dollars and simply modified it,” Capasso said. “It shows you can do things not only in a simpler way but also in a cheaper way.”

Research into the use of vortex beams in fiber optics first began in 2004, when scientists began sending multiple vortex beams, each at the same wavelength, along a single optical fiber–a technique known as spatial division multiplexing.

“With vortex beams you can presumably increase the information capacity by another large factor and exceed the wall that many system engineers think is there around one hundred terabits per second [on a single fiber],” Capasso said.

To fully realize the potential of spatial division multiplexing, a detector like Capasso’s must separate and read off the different types of vortex beams sent along the fiber. Each different type of beam has a special number called orbital angular momentum that characterizes its “twistiness” and can take on any integer value.

Capasso’s device was able to distinguish between beams of three different orbital angular momentums, meaning that such a solution could, in principle, triple the capacity of current fiber optics systems. But Capasso estimated that a factor of ten improvement might be possible with spatial division multiplexing—and other scientists think it could be even higher.

Capasso, however, emphasized that his group’s results are only preliminary, and must be complemented by research on the manufacture and transport of vortex beams.

“There are a number of companies that are taking this approach seriously as a research topic,” Capasso said. “Nothing is going to be inside of a practical system in my opinion before probably ten years—although sometimes one makes mistakes in predicting technology.”