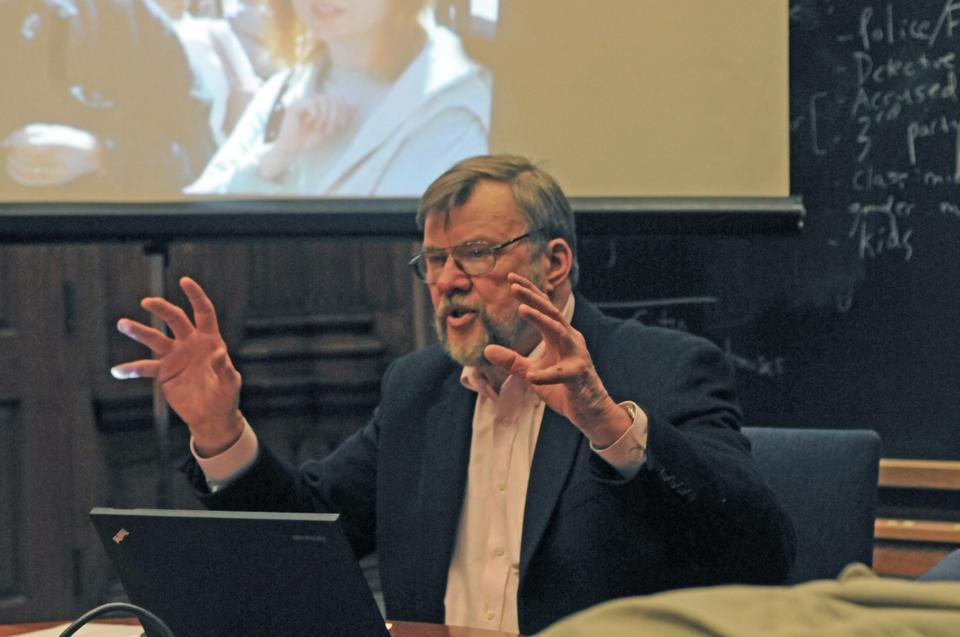 Professor Richard Hackman, one of the world’s leading experts on group and organizational behavior, talks about his research on team dynamics, self-managing groups, and leadership in the Barker Center yesterday.
By John P. Finnegan, Crimson Staff Writer

Over a career spanning nearly half a century, psychology professor J. Richard Hackman garnered widespread esteem and accolades for pioneering the study of team dynamics. But on the side, Hackman quietly devoted countless hours to improving one team in particular—the Harvard women's basketball squad, for which he volunteered as an honorary coach.

Those who knew him say that gestures like these defined Hackman, who died on Jan. 8 in Boston following complications from lung cancer. He was 72.

“He really lived what he was studying," said Alexa S. Fishman ‘13, Hackman's thesis advisee. "He wanted to help and give back to the undergraduate community."

By all accounts, Hackman was a model team player who practiced what he taught. He was at once a dry wit who knew how to lighten the mood with humor, an attentive mentor and colleague skilled at putting others at ease, and a maverick unafraid to voice dissent when the situation demanded it.

“He was funny, quirky, interesting,” Gilbert said. “He was not a guy who sat down and told canned jokes.”

In a thesis prospective meeting with Hackman, Fishman recalled, Hackman deadpanned that her thesis proposal was not up to par. After she offered to take back her proposal, Hackman quickly reassured her that he was not being serious.

“He said, ‘No, no, I’m joking, it’s totally fine,’” Fishman recalled. “He wanted to add a little humor to this meeting that sort of had to happen.”

Hackman, who stood at a commanding six-foot-six-and-a-half stature, was known for taking every opportunity to relax.

“It didn’t matter if he was sitting with the president of the University—when he got comfortable and sat down, he just took off his shoes,” Gilbert said. “If it was possible for him to lay down, he would also do that.”

Those who knew him remembered Hackman for his natural generosity and attentiveness to others.

“Everyone got his attention,” Fishman said. “When he spoke to you and he was talking to you, he was 100 percent focused on you.”

Christopher M. Dial, Hackman’s assistant, said that in their conversations, Hackman was always concerned about how Dial and others were doing.

“He and I would just chat about things that were just everyday,” Dial said. “I’ll miss someone who just checks in and wants to know how you’re doing.”

Colleagues say this caring spirit was matched by an expansive intellect, one that contributed immensely to the field of organizational psychology.

“You could bring him a problem at any level of psychology, and he could help you think it through,” Gilbert said.

Hackman, who came to Harvard in 1986 after 20 years at Yale, conducted research on team dynamics that had substantial real-world implications, including new research methodology within the intelligence community for studying teams and an alternative method for training cockpit crews.

Hackman received numerous awards for his work, among them the Distinguished Scientific Contribution Award within the American Psychological Association’s division on industrial and organizational psychology.

But despite the accolades, Hackman maintained a steadfast humility that translated into a distaste for boasting throughout his years of teaching.

“He looked askance at people who spent a lot of time tooting their own horn,” Gilbert said. “Richard had a silencer on his horn, so even when he did remarkable things, he would work to make sure nobody found out about them.”

Even after they had been friends for nearly 20 years, Gilbert said, he only learned about Hackman’s work for the women’s basketball team after he spotted Hackman at one of the games.

But coupled with this humility was what Hackman’s wife Judith D. Hackman described as her husband’s distinctly “contrarian” streak.

“He was often the one who voted no, and everybody else voted yes,” she said. “His 'no' was probably the right thing to say.”

Gilbert agreed, calling his friend “a moral beacon” who was “unendingly concerned with what was right and what was wrong.”

Yet those who were close to Hackman said it is the little things that are most irreplaceable about him.

For Judith Hackman, it will be her husband’s daily phone calls; for Gilbert, it will be Hackman’s penchant for barbecue.

“In the last two decades he and I probably hit every good barbecue stand within a 50-mile radius of Boston,” Gilbert said. “I will forever more be eating brisket and ribs by myself.”

—Staff writer John P. Finnegan can be reached at johnfinnegan@college.harvard.edu.