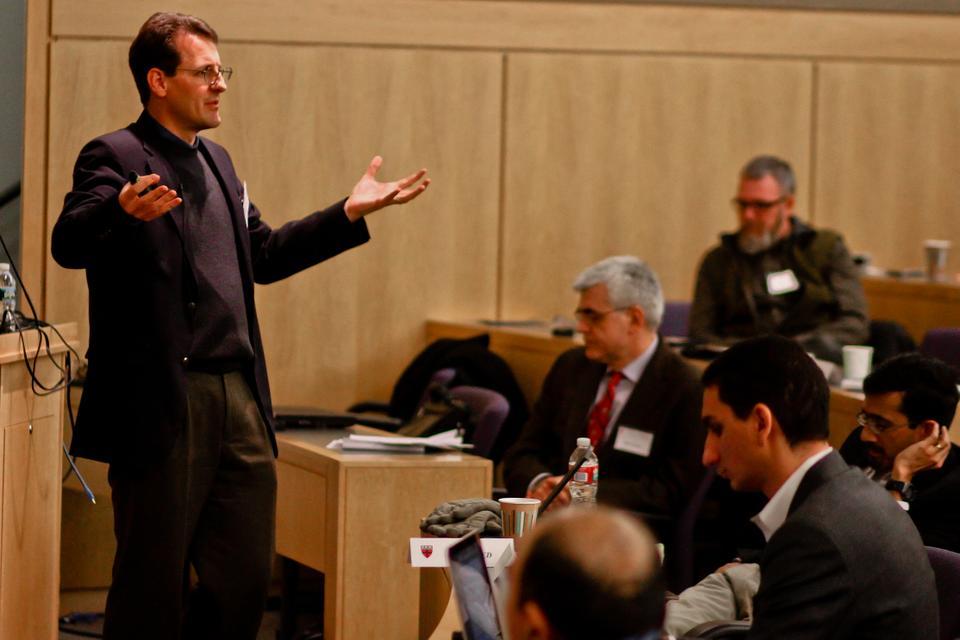 Senior director of architecture research at NVIDIA Stephen Keckler was one of many speakers present at Saturday's computing symposium. The topics focused on the potential and future of supercomputers, and Keckler contributed by discussing commodity technologies.
By Brian C. Zhang, Crimson Staff Writer

Delivering the keynote speech at a symposium Friday on the future of computation, hedge fund founder and scientist David E. Shaw predicted that researchers will increasingly rely on high-speed simulation to probe biological questions.

“One of the key questions is... how does simulation actually fit into the role of the scientific method?” Shaw asked a packed audience in Maxwell Dworkin.

“I think we are going to get to the point where people see [biomolecular simulations] as a piece of evidence in the same way that they do experiments,” he concluded later in his talk.

Shaw, who founded the D. E. Shaw Group in 1988 and now serves as chief scientist at D. E. Shaw Research, also called for a more prominent role for computers in confirming existing theories and opening up new hypotheses in biology.

To illustrate the progress that has already been made, Shaw presented a high-speed supercomputer called Anton specifically designed by his research group for a class of problems called molecular dynamics simulations.

His research group has used Anton to stage simulations that have resulted in new insights into the protein folding process.

“We don’t know enough at this point to know what the limitations are,” Shaw said. “I think we have to convince ourselves.”

Nilesh Tripuraneni ’13, a physics concentrator who attended Shaw’s talk, said he had heard of Shaw’s hedge fund but was not as familiar with his current work in scientific computation.

“I know a lot of fundamental research that people do, but I’m not as knowledgeable about these applications of high-power computing,” Tripuraneni said. “I thought it was amazing that they were able to reproduce a lot of results about protein folding through their simulations.”

Shaw’s address was followed by six other presentations about the ways computing can be used to advance neuroscience, chip design, urban planning, and other disciplines. Steven E. Koonin, director of New York University’s Center for Urban Science and Progress, presented a vision of using real-time data sensors to inform decisions made by city officials about traffic flow, public health, and infrastructure planning.

Friday’s symposium capped off a series of Wintersession offerings—including a student computational challenge—organized by the Institute for Applied Computational Science.

Efthimios Kaxiras, professor of pure and applied physics and director of the Institute, said he hoped the events would educate and connect students and faculty.

“All of this is to foster a computational culture and community here at Harvard,” he said.