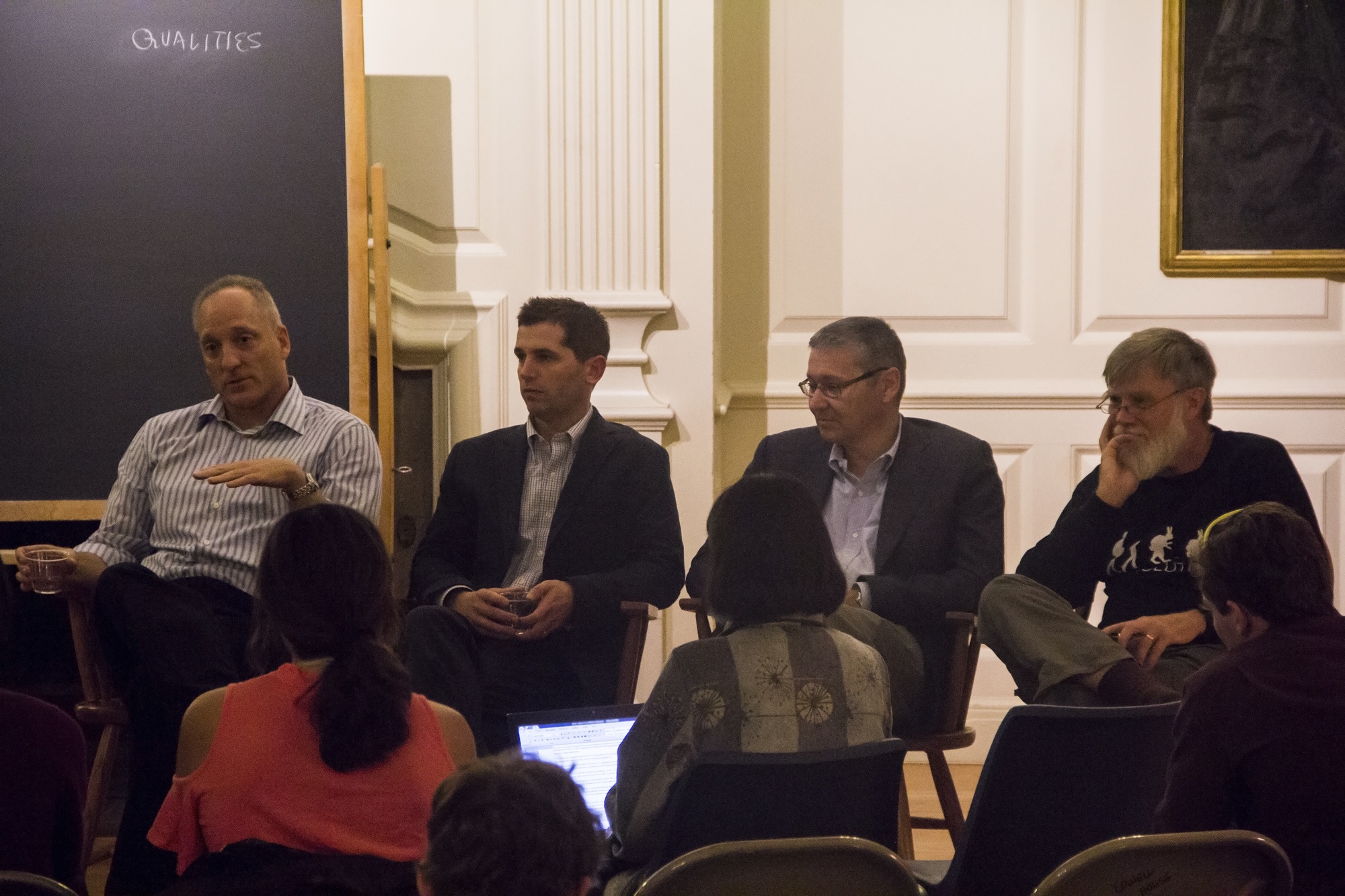 Dean of the Faculty of Arts and Sciences Michael D. Smith (far left) held a discussion with students regarding the next Dean of the College in Lowell House.
By Matthew Q. Clarida, Crimson Staff Writer

At the second of three scheduled open forums designed to solicit student feedback on the ongoing search for a new Dean of the College, undergraduates on Wednesday night urged Faculty of Arts and Sciences Dean Michael D. Smith and members of his search committee to choose a new College Dean who will be attentive to the idiosyncrasies of the Harvard social scene.

The 75-minute meeting, which drew a crowd of about 25 students to the Lowell House Junior Common Room, took the form of a wide-ranging discussion that covered issues ranging from the duties of the Dean of the College to the social effects of final clubs to the experience of students living in the Quad.

The forum is part of a larger effort to involve students in the search process for a permanent replacement for Evelynn M. Hammonds, who stepped down on July 1 after five years as College Dean. Since being formed over the summer, Smith’s advisory search committee, which consists of 21 professors and no students, has sought to engage the undergraduate community through open discussions and a meeting with the Undergraduate Council.

Wednesday’s conversation got off to a quick start. After Smith offered a textbook definition of the role of the Dean of Harvard College, many students said they would prefer that the next dean make it a priority to interact with students in a variety of forums.

“Part of the dean’s job should be ‘boots on the ground,’” said attendee Christopher A. Smiles ‘15.

“The quality that would be most important to me would be sort of “spontaneous interaction” [between the dean and undergraduates],” offered another attendee, James P. Biblarz ‘14. Biblarz said that he would like to see the next College Dean at House social events such as Stein Club.

A number of students also suggested that the University look within its own ranks for the next dean.

“I would [prefer] somebody who has had extensive interaction with Harvard College students,” said Sarah E. June ‘14. “[Somebody who] in some sense had an experience with Harvard students, not necessarily another school’s students, because it is a different experience.”

As the forum progressed, the dialogue moved from a concrete discussion of the search process to a more flowing conversation of social life at Harvard and the House system, and how a new dean might address concerns in both areas.

“I’ve loved my experience here so much, but my biggest disappointment is how dominant I find the final clubs to be of Harvard’s social life,” Biblarz said. “I hope that the Dean of the College can think of creative ways to produce social options for students that are as compelling.”

The statement got the room buzzing. N. Gregory Mankiw, Economics Department chair and a search committee member, asked if men and women have different experiences with final clubs, prompting a wave of laughter and a collective “yes” from the audience. The exchange continued when another student asked Smith if the University saw final clubs as a problem.

“Yeah,” Smith replied. “Not a problem exclusively, because there is a large, long history there that I think should be recognized and celebrated, but the activity that goes on there, absolutely it’s a problem.”

When asked how the administration was planning to remedy the situation, Smith again replied matter-of-factly.

“If there was an easy [solution] we would have done it,” he said. “We struggle with it all the time.”

—Jared T. Lucky contributed to the reporting of this article.