Legend of Harry Parker Lives On at Head of the Charles 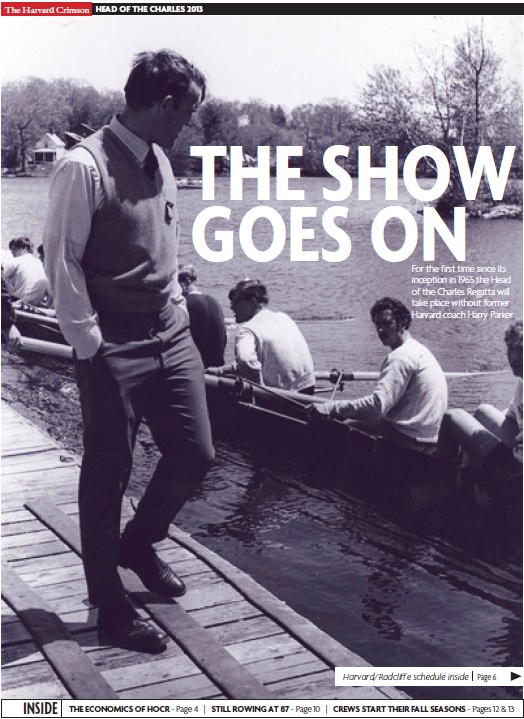 When Harry Parker was diagnosed with myelodysplastic syndrome in 2011 over 400 former rowers sent messages of love and appreciation. By Courtesy Crimson Sports Staff
By Kurt T. Bullard, Crimson Staff Writer

The Head of the Charles Regatta returns to Cambridge once again this year and the anticipation for the event is as high as ever. Hundreds of thousands of individuals will file in from around the globe to either compete in or watch the largest two-day regatta in the world. However, despite the multitudes of people that will flock to the banks of the Charles River this upcoming weekend, there will be a feeling that something—or, more accurately, someone—is missing.

The world-famous regatta will go on without the late Harry Parker for the first time since its inaugural session in 1965. The former Harvard men’s heavyweight crew coach, who was originally diagnosed with myelodysplastic syndrome—a blood disorder—in 2011, passed away in June at the age of 77.

Parker was one of the most decorated coaches in the history of collegiate rowing. Over his 51-year tenure as head coach, he led Harvard to 22 undefeated seasons, 16 official and unofficial national championships and a 44-7 record in the annual Harvard-Yale Regatta. His impact on the Crimson’s program was monumental.

Yet, behind all of these accomplishments stood a very soft-spoken, humble individual. A man of few words, Parker was nonetheless able to get the most out of his rowers.

“He was very quiet, modest, and calm,” said current men’s heavyweight captain Andrew Holmes. “[But] he wanted to win as much as we did, and I think that was a large part of his success.”

Parker’s reserved demeanor was much different than the strategies employed by some fellow crews of his time.

“You hear stories of some coaches who break down their rowers and tell them they’re no good,” former oarsmen Eliot Hodges ’02 said. “That wasn’t Harry’s style. He never screamed at people.”

Parker didn’t need words to motivate his crews. He set a precedent of success and hard work that his team strived to match through his example. Whether it was by running stadiums alongside the team until the very late years of his life or mopping up rowers’ sweat in the boathouse, he helped motivate athletes to exert themselves to their fullest potential for the sake of the entire squad.

“He created a culture that was highly-team oriented,” Hodges said. “Ultimately, you were what you contributed to the team. It’s a difficult culture to establish [with college athletes] but one he maintained over his career.”

When Parker used his words, he knew how to employ them effectively. Parker put his competitive fire on full display for his team leading up to the 2013 Harvard-Yale Regatta.

“He was the most pumped up I’ve ever seen him the week leading up to [the spring’s] Harvard-Yale Regatta,” Holmes said. “He was often struggling with his health, but no one noticed because he was so focused on how much he wanted to beat Yale.”

While Parker had most of his success at Harvard, his accomplishments extended outside the realm of Cambridge. His achievements pushed American crews to change the way they operated. Parker is credited with creating the fall head racing season in the US.

“He revolutionized American rowing,” said Greg Stone ’75, another former rower of Parker’s . “Since he was so observant on the international scene, he was able to bring the best of world rowing to the American system. When he came to Harvard in the ’60s, he brought the techniques…that the Germans [and Russians] were using to train.”

Under Parker, Harvard crews were pictures of excellence in collegiate rowing.

Other programs strived to compete with the dominant Crimson crews. Steve Gladstone, who was the head coach of the Harvard lightweight men from 1970-74 before moving on to heavyweight at other institutions, looked forward to competing with Harvard.

“It was very exciting to compete with Harvard crews,” said Gladstone, speaking about his time at Brown from 1982-1994. “There was a consistency in performance with Harvard, and I think that consistency stimulated other programs to reach their standard.”

Parker achieved success on the world stage as well. He coached several men’s Olympic crews from 1964-1984, leading his teams to three medals during his tenure. However, given the state of women’s sports in this era, his success with the women’s Olympic team was perhaps more notable.

In 1975, Parker became the first women’s national team coach in American rowing history. His impact was immediate, leading the eight-woman squad to a silver medal in its first appearance at the World Rowing Championship. The next year, he led the team to a bronze medal in the 1976 Summer Olympics in Montreal.

“He put women’s rowing on the map,” Stone said. “He coached women the same as men and they performed the same. He was very much an egalitarian at the time when most male athletes and coaches were not.”

Parker’s impact on his oarsmen stretched beyond just rowing; his former athletes say that the relationships he formed with them transcended their years with the Harvard crew and helped shape who they were as people.

When the former Crimson coach was diagnosed with myelodysplastic syndrome in 2011, Hodges and other rowers asked many former oarsmen for some notes that could be amalgamated in a get-well soon card. The expectations for the messages were not too large—more or less, just some small words of encouragement. The response they received, however, was much greater than they had imagined, as over 400 rowers took the time to send him sincere messages.

“It was incredible,” Hodges said. “They weren’t just [get better soon] messages. They were robust paragraphs, sometimes even long letters, saying how Harry Parker had deeply impacted their lives.”

While Parker impacted the lives of many of those who rowed under his watch, they perhaps affected him just as much. The oarsmen meant as much to Parker as he meant to them.

“His best friends were the people he used to coach,” said Abigail Parker, Harry’s daughter and current Harvard rower. “They would have reunions and spend a lot of time together. You could tell that they were all grateful for the impact they had on each other.”

In honor of the legendary coach, the Head of the Charles Regatta administration will recognize a moment of silence before racing begins.