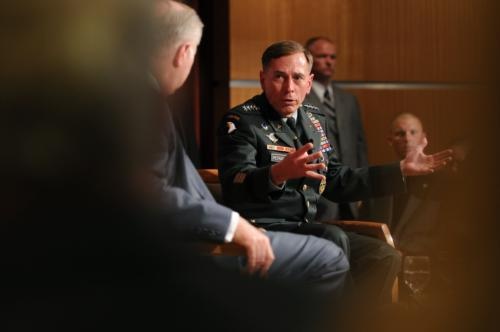 David H. Petraeus speaks before a packed audience at the Institute of Politics in April 2009. Petraeus will return to Harvard as a non-resident senior fellow at the Belfer Center for Science and International Affairs, according to an HKS spokesperson.
By Steven R. Watros, Crimson Staff Writer

David H. Petraeus, former CIA director and retired four-star Army general, will join Harvard Kennedy School as a non-resident senior fellow at the Belfer Center for Science and International Affairs, according to an HKS press release.

At Harvard, Petraeus, who resigned from the CIA in November 2012, will partner with Kennedy School professor Graham T. Allison ’62 to head a new Belfer Center project called “The Coming North America Decades.” The project will study scientific, economic, and technological factors that have contributed to North American competitiveness and analyze the potential effects of policy options on American interests.

“We count ourselves fortunate to have David Petraeus making a major intellectual investment in issues so central to a Center whose mission is to advance policy-relevant knowledge about the most significant international challenges,” Allison said.

Indeed, Petraeus joins the Kennedy School not only as a seasoned leader with nearly unmatched experience, but also as a robust academic, educated at both West Point and Princeton's Woodrow Wilson School of Public and International Affairs.

Since his departure from the CIA in 2012, Petraeus has taken on a variety of roles in non-governmental organizations and the financial sector. In March, Petraeus was hired by private equity giant KKR to lead the firm’s newly-created institute for macroeconomic forecasting and public policy.

Petraeus has also added positions at other institutions of higher learning to his post-CIA resume. This year, he joined both the City University of New York and the University of Southern California. Unlike his posts at those institutions, Petraeus' position at Harvard does not involve teaching.

Petraeus’ stint at the City University of New York, which was announced this summer, was met with mild yet fervent opposition from some of the school’s affiliates. Over 500 professors and graduate students signed a petition asking for Petraeus’ termination after six students were arrested for protesting his appointment on grounds of his actions at the helm of military operations in Afghanistan.

After leading war efforts in Afghanistan, Petraeus became CIA Director in 2011. He stepped down from that post following a well-publicized scandal surrounding an extramarital affair with Paula D. Broadwell, a Kennedy School alumna and Petraeus’ biographer at the time. The two met at an event at the Institute of Politics in 2006.

The press release does not specify when Petraeus’ fellowship will begin.

In July, Gawker reported that Petraeus had secured a fellowship at the Kennedy School, citing documents obtained via a Freedom of Information Law request. Friday’s press release marks the first time the Kennedy School has acknowledged the appointment.