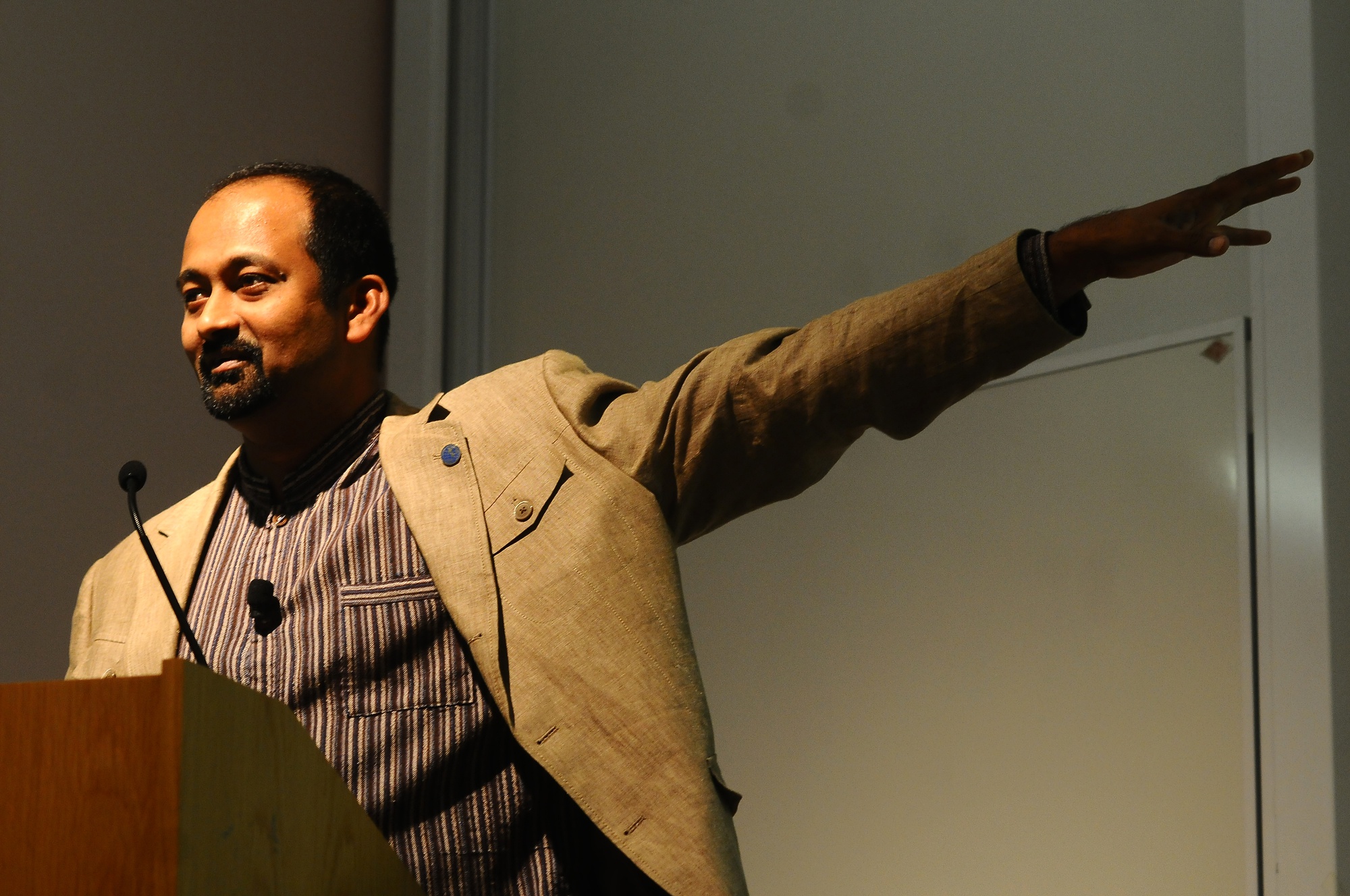 Conservation photographer Sandesh Kadur points out the wide diversity of life in the Himalayas. In his talk yesterday at the Sackler Museum, he discussed how global change impacts biodiversity in the mountain ecosystem.
By Meg P. Bernhard, Contributing Writer

Scientist Kamaljit S. Bawa and wildlife photographer Sandesh Kadur captured the rich biodiversity of the Eastern Himalaya in a presentation and book signing at the Sackler Museum on Tuesday.

“When you look at books about the Himalaya,” said Bawa, a former fellow at the Kennedy School’s Sustainability Science Program, “they show mostly beautiful landscapes, snow, and ice. What we wanted to document was the richness of life in the Himalaya.”

Five years ago, Bawa and Kadur trekked over 15,000 feet up the Eastern Himalaya, which has been coined a “biodiversity hotspot” by Conservation International. After compiling over 10 terabytes worth of photography, the pair co-authored “Himalaya: Mountains of Life.”

“What we did was we basically took all this research and put it in language that everyone can understand,” said Kadur, a winner of the National Geographic Emerging Explorer Award. “We married that with beautiful photography.”

Kadur said he believes his photography of the Himalayan landscape will captivate readers and encourage them to learn more about the region’s flora and fauna.

“I think it’s very hard for people to contemplate climate change that could be a big change decades away,” said Heather A. Henriksen, director of the Harvard University Office for Sustainability. “So seeing these photos makes it much more tangible today.”

Bawa, a professor at the University of Massachusetts, Boston, met Kadur in 2003 after seeing Kadur’s award-winning documentary “Sahyadris: Mountains of the Monsoon.”

Introducing the event, Kennedy School professor William C. Clark said the lecture integrated both arts and science in a way that universities struggle to do.

Bawa and Kadur both said that they hope to help a global audience understand the consequences of human development, and in turn, influence policy regarding environmental sustainability.

“Land use changes by pushing the frontiers of the forest,” Bawa said.

In 1996, Bawa founded the Ashoka Trust for Research in Ecology and the Environment. His organization focuses on applied science and how research can affect policy-making in countries like his native India.

According to Bawa, as populations—especially in Asia—continue to swell, governments respond by constructing dams, hydro plants, and other man-made public works projects to support their citizens. India’s government, for example, has devised plans to construct 400 new hydro dams over the next 20 years.

Henriksen said she felt “hopeful” that there were so many students in the audience.

“The young people at this institution [are] going to go out and become global leaders and will really interact and solve these challenges.”