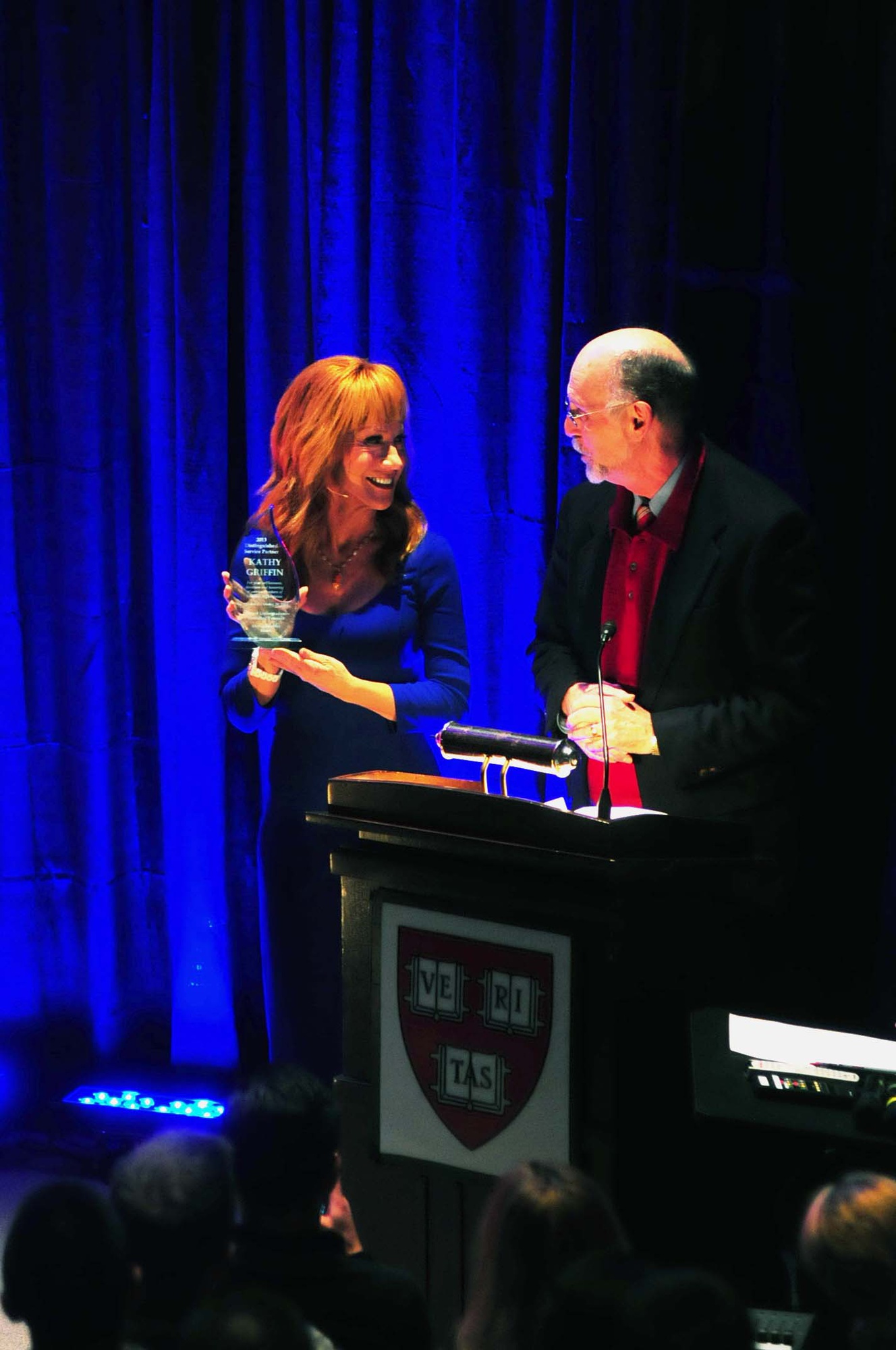 Comedian and bestselling author Kathy M. Griffin received the inaugural Distinguished Service Partner Award to commemorate her work with veterans during a charity benefit hosted by the Harvard Undergraduates Honoring Veterans this Saturday.

After a performance by the improvisational comedy group Immediate Gratification Players, Griffin participated in a conversation with Undergraduate Council Finance Committee Chair Matthew R. Marotta ’14 on topics ranging from her work with veterans groups to life as a female comedian. “My involvement is built around laughter truly being the best medicine,” Griffin said in an interview with The Crimson after the event. “What I learned was that these men and women need to laugh at these moments, more than ever.”

Griffin, who has toured Iraq and Afghanistan with the United Service Organizations, also gives tickets to her comedy shows to the Veteran Tickets Foundation, allowing veterans to come free of charge and meet her after the show.

“It’s really one of my favorite things about touring, meeting these people every show,” Griffin said. “I love to hear their stories, and everybody’s story is so different.”

HUHV, which works to bring awareness to veterans’ presence on the Harvard campus, planned the charity event to provide emotional relief to stress-affected veterans and demonstrate Harvard students’ support for the veteran community, according to the group’s president Naji A. Filali ’14.

Filali said that the Distinguished Service Partner Award was designed to honor an individual based on his or her selflessness and devotion, understanding of the situations combat soldiers and veterans face, and influence on the veteran community.

“Kathy is someone who has almost never turned down an opportunity to reach out to veterans and to put on pro bono comedy, so she was a rational choice,” Filali said. “Among comedians and among celebrities, she has been the face of veteran charity efforts, so she is our inaugural recipient, and we hope to have individuals who replicate her dedication in the future.”

Though the event was free for veterans, Harvard students and the general public were charged for tickets to the benefit, the proceeds of which will go to the Home Base Program, an organization that works to provide clinical care and support for Iraq and Afghanistan veterans affected by post-traumatic stress disorder and traumatic brain injury.

The Red Sox Foundation also donated a Jon Lester jersey, a Mike Napoli jersey and a Ryan Dempster baseball to be auctioned off after the event. The proceeds will also go to the Home Base Program.

Though Griffin uses laughter and comic relief to support the veteran community, she encourages others to help out in anyway they can.

“Now there’s such a myriad of ways to be involved, and you can be involved in a way that’s appropriate for you,” Griffin said. “You see somebody in uniform, and you just say hi, say thank you, and I found that for a lot of military members just a simple thank you goes a long way.”