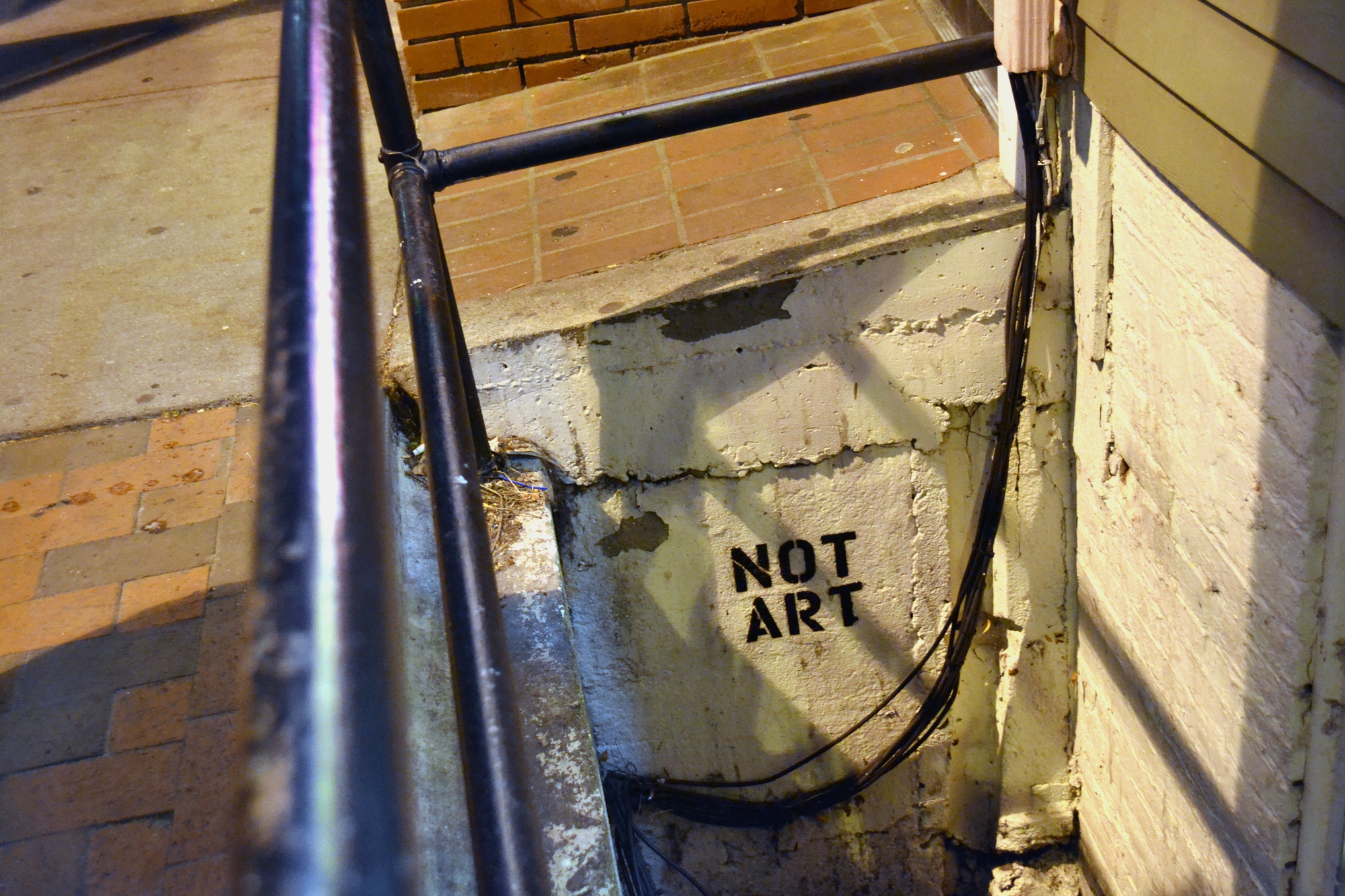 Portrait of the [Not] Artist As a Young Man

Recently, though, you may have also noticed works that declare themselves to be “Not Art” around Cambridge. Written on buildings, sidewalks, and the whiteboard belonging to the Chinese restaurant Bon Chon that normally displays the day’s dumpling offerings, the two words seem to crop up everywhere. The snobs amongst us might scoff and say, “That’s Not Art,” but, well…
By Maia R. Silber

Harvard students are surrounded by art. We have three fine arts museums on our central campus and countless more across the river. Our humanities professors teach us how to appreciate beautiful music, profound literature, and exquisite paintings. Even those who have yet to fulfill their Aesthetic and Interpretive Understanding requirement can’t help but notice  Annenberg’s Gothic towers or Sever’s Romanesque arches.

Recently, though, you may have also noticed works that declare themselves to be “Not Art” around Cambridge. Written on buildings, sidewalks, and the whiteboard belonging to the Chinese restaurant Bon Chon that normally displays the day’s dumpling offerings, the two words seem to crop up everywhere. The snobs amongst us might scoff and say, “That’s Not Art,” but, well…

I tracked down the project’s mastermind through the Not Art Facebook page, which now displays the Harvard insignia with “Veritas” crossed out and replaced with you-know-what. On the phone, we arranged to meet at Peet’s Café, where he told me I would “recognize him.”

Not quite sure what to expect (would he be dressed in a Not Smock covered in Not Paint?) I arrived at the café on a cold, windy Thursday. The man smoking on the bench in Winthrop Park looked just like any other, dressed in jeans and a faux-leather jacket. He greeted me happily and told me how excited he was for his project to be covered for the first time, but asked not to be identified by name, as he sees the “mystery” of his project as one of its appeals. He told me I could refer him to him as the Not Artist.

“I got to be in my mid-twenties and I realized that I wasn’t getting enough exposure with my art,” the Not Artist said, shrugging. “I was kind of sick of coffee shop gigs.”

One day, the Not Artist brought one of his pieces to the restaurant where he waited tables at the time. He meant to show it to his colleagues, but when the workday got busy, he accidentally left it on a table over night. The next day, the Not Artist returned to a crowd forming around the piece, trying to figure out what it was.“

They were like, ‘Oh my god, this is so creepy! This  is so weird!’” said the Not Artist. “It was the greatest reaction I’ve ever gotten to anything that I’ve made.”

This got the Not Artist thinking. The piece generated such a strong response, he felt, because it was viewed out of the context of a gallery or museum, and thus didn’t appear to be art. He started to wonder what, exactly, defined that elusive word, art.

“Okay, if you take a traffic cone and you bring it into a gallery does it become art?” he asked me. I remembered seeing the very object adorned with the Not Artist’s standard black spray paint in a photo online.

When I didn’t answer immediately, the Not Artist continued. “Then if you take it out of the gallery and put it back on the street, is it Not Art anymore? But what’s the difference?”

He cites Marcel Duchamp’s famous “readymade” titled “Fountain” as his inspiration. In 1917, the French artist tried to submit a urinal, flipped on its side and signed with the pseudonym “R. Mutt,” to an exhibition by the Society of Independent Artists. It was subsequently declared Not Art and rejected. Now, the urinal is a hailed as a landmark of the avant-garde movement, and replicas are featured in museums worldwide.

When we finished talking, the Not Artist offered to take me around to see some of his pieces in Harvard Square. We walked back up JFK St. and turned on Mt. Auburn where the Not Artist stopped in front of a comic store called Millionaire Picnic. He pointed to the side of the building. It was dusk, and the wall was obscured by shadows, but after squinting for a few seconds I spotted the simple black words painted a few feet above eye level.

I asked the Not Artist how he chooses his locations, and he told me that he looks for spots with overlooked aesthetic appeal; he sees his project as a way to highlight the “art” that we pass without notice from day-to-day.

He recalled making his first public piece on the back of a loading dock in Somerville. “I spraypainted ‘Not Art’ on there,” he said. “A few weeks later someone added ‘ichoke’ on the end so it said ‘Not Artichoke.’ I think they even drew a little picture.”

We went on to the next location, a stairwell next to Charlie’s Kitchen that leads underneath Eye Q Optical. This location, too, seemed partially obscured.  I hadn’t expected Not Art to be so inconspicuous; I grew up in New York, where street artists usually try to be as big, bright, and bold as possible.

The Not Artist explained that he prefers his work to be impermanent and unobtrusive, so that he does not deface private property or disrupt what he sees as “the subtle beauty of an urban setting.”

“I have this one at an abandoned gas station in Somerville,” he told me. “There’s this big sign that says ‘regular self’ and ‘plus self’ and I put [removable] plastic letters that say ‘Not Art’ where the numbers usually are. It looks really good but it’s socially responsible.”

The Not Artist then led me to the specials sign outside of Bon Chon, where he has written “Not Art” in erasable marker. The words, he told me, have been there for a week without anyone trying to remove them.

Similarly, on the Harvard campus itself, the Not Artist painted his letters on a wooden block and placed it over a square on the chessboard outside of the Science Center. He told me that he didn’t feel a need to paint over any Harvard buildings.

Besides spraypaint, plastic letters, and wooden blocks, ideas, the Not Artist told me, are his primary medium. I asked him whether he had an overall message to impart to his viewers.