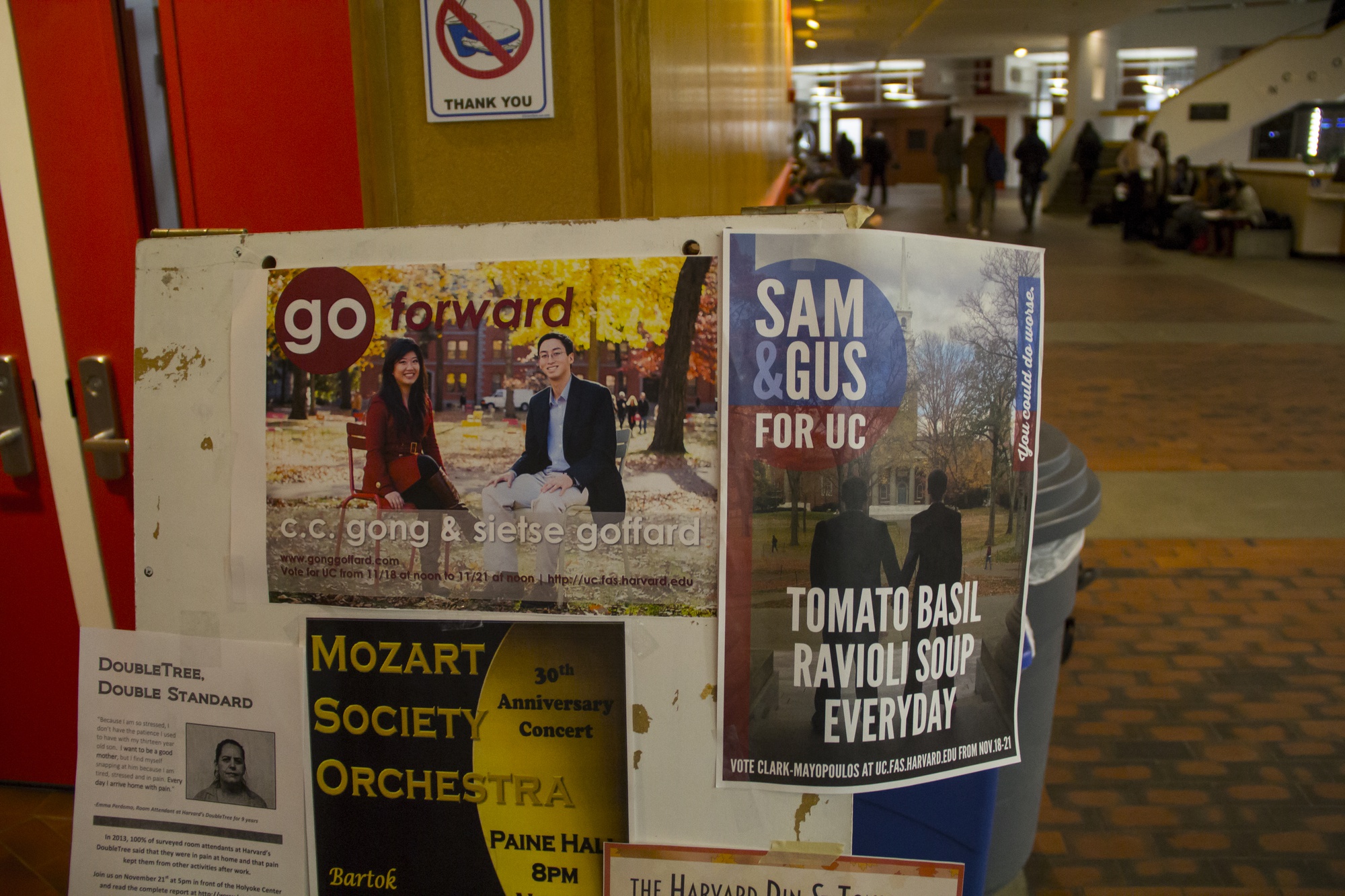 Posters for the UC presidential elections are posted in the Science Center. Campaigning began on Wednesday, and candidates quickly took to campus and the web to promote their platforms. By Zorigoo Tugsbayar
By Steven S. Lee, Crimson Staff Writer

These planks are also, sort of, represented on the platform of the joke ticket, which promises on its Facebook page “to be the voice that Harvard students hear. Not the one you hear in Lamont at 4 a.m. The good one.”

The similarities aren’t limited to the recurring promises. On timely campus issues, the two serious tickets—C.C. Gong ’15 and Sietse K. Goffard ’15, and Chika-Dike Nwokike ’15 and Una Kim ’15—have much in common, and the third ticket—Sam B. Clark ’15 and Gus Mayopoulos ’15—much to joke about. (Both Gong and Nwokike are inactive Crimson editors.)

Take the four referenda that made this year’s UC presidential ballot. Both the Gong-Goffard ticket and the Nwokike-Kim ticket endorse the gender-neutral housing referendum question. While not addressing the referendum question that calls on the University to provide MBTA passes to undergraduates, the Clark-Mayopoulos ticket takes on all the others and then some, promising “to tackle the tough issues, like divesting from gender-neutral weekend shuttles and investing in immigration reform and not having water bottles anymore.”

All three tickets, who will face voters next week, also say they aim to improve the dining hall experience. With Thanksgiving break around the corner, both Gong and Goffard as well as Nwokike and Kim are advocating for expanded dining hall options during holiday breaks. For their part, Clark and Mayopoulos have a more modest proposal: making Tomato Basil Ravioli Soup a staple at every dining hall meal.

As part of their effort to support academics, both Gong and Goffard as well as Nwokike and Kim are advocating for the creation of a degree in Latino and Latin American studies. Last year, current UC President Tara Raghuveer ’14 and Vice President Jen Q. Zhu ’14 made the same promise to students during their campaign, and a year later, the issue is in the discussion stage.

Both serious tickets also voice the perennial UC promise to increase student group funding. This year, the dearth in UC funding available for club sports has made the issue particularly salient for both insider tickets and other UC representatives calling for an increase in the Council budget. It remains unclear whether any of these candidates will be able to convince the administration to increase the UC budget when it has not increased since 2006 and yearlong efforts to raise the student activities termbill fee have found no success at the College administrative level.

The insider candidates also seem to be in agreement that the UC must better present its initiatives to the student body and engage with undergraduates. Both tickets point to the We The Crimson initiative, which lets student vote on proposals suggested by their fellow students in an online portal, as a tool for such engagement.

Launched last November with high expectations, We The Crimson has fallen out of usage, UC representatives say, because of minimal student participation and lack of coordination between the UC and the transitioning College administrative leadership. Gong and Goffard as well as Nwokike and Kim promise to restore the tool.

The three tickets do not always voice the same ideas, however.

The two insider tickets offer varying suggestions for Opening Days programming. Both agree that freshmen should be exposed to a more diverse set of perspectives during the first few weeks on campus, but they see this reform happening differently.

Gong and Goffard identify gaps in freshman conversations regarding the issues of stress and preferred gender pronouns. Nwokike and Kim, meanwhile, say they wish to see revamped Community Conversations programming more focused on reducing racial and socioeconomic divisions at Harvard.

An earlier version of this article stated that that the Nwokike-Kim ticket does not mention the gender-neutral housing referendum question or other referenda on its website. To clarify, Nwokike and Kim's official platform, which is not posted on the ticket's website, does endorse universal gender-neutral housing on campus.