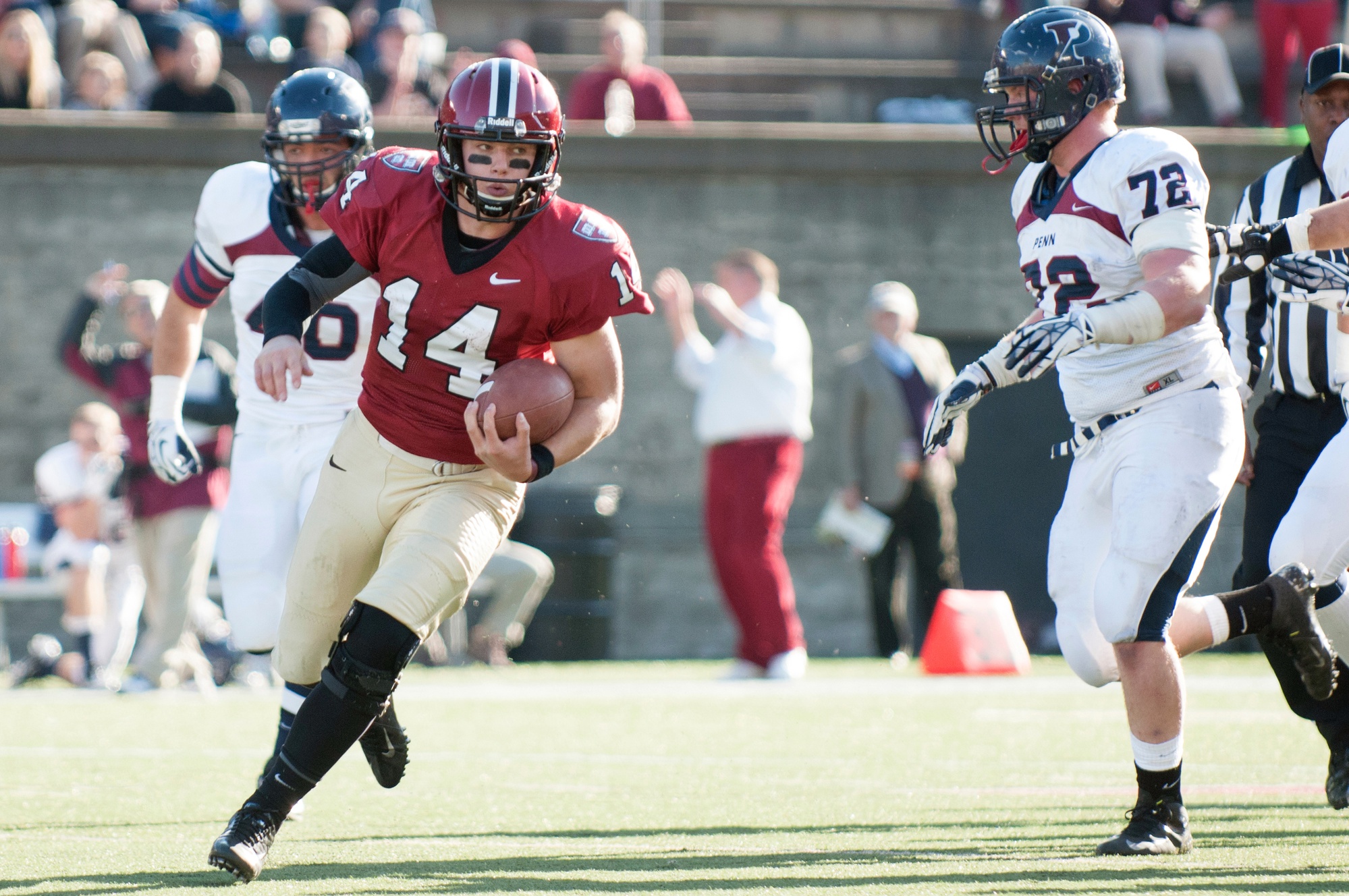 Harvard football coach Tim Murphy pulled junior quarterback Conner Hempel early in the third quarter with his team up 38-0. Hempel would return to the game, however, as Penn stormed back with 30 unanswered points, ultimately losing to the Crimson 38-30.
By David Steinbach, Crimson Staff Writer

Five minutes into the third quarter, sophomore running back Paul Stanton capped an effortless 76-yard drive by punching in his second touchdown of the day. The scoreboard read Harvard 38, Penn 0. It was a classic laugher.

But from that point on, nothing went right for the Harvard football team.

In a dynamic offensive surge bearing no resemblance to its feeble first half efforts, the Quakers scored touchdowns on four straight drives. And while the Penn defense appeared out to lunch in the first two quarters, it came alive in the second half and forced five consecutive Crimson three-and-outs.

The Harvard faithful must have been shocked when the Quakers offense took the field with just under four minutes remaining in a one-possession, 38-30 game. But after two fourth down conversions moved Penn inside the red zone, the Crimson defense finally held up and forced a turnover-on-downs. The improbable and valiant Quakers comeback fell just short.

“Finally we had a little bit of momentum and physicality back and finished some plays,” Penn coach Al Bagnoli said. “We were playing with a lot more juice and confidence, but it’s really hard to come back against that kind of football team when you’re that far behind. We dug ourselves a really deep hole.”

The momentum initially shifted with just over 10 minutes remaining in the third quarter. Following a Penn fumble and with a 38-point lead in his pocket, Harvard coach Tim Murphy decided to take out many of his offensive starters, including junior quarterback Conner Hempel.

The play calling turned conservative, as eight of the Crimson’s next nine offensive plays spanning over three drives were runs for little to no gain.

In the meantime, consistent strikes from Penn quarterback Ryan Becker made the score 38-22, and Harvard’s starters rushed back into the game. But Hempel could get nothing going, as the Crimson was forced to punt twice more.

Excluding Harvard’s touchdown drive on its first possession of the second half, the Crimson totalled just 29 yards of offense to Penn’s 262 in the final two quarters.

“There’s no reason to give up as many points as we gave up,” Harvard coach Tim Murphy said. “That’s a team thing. Offense didn’t move the ball, defense didn’t stop them. We had some punts that were kind of iffy, and if you put that all together and it was very lackluster.”

Little could better articulate Saturday’s football game than the overused phrase, “A Tale of Two Halves.” For Harvard, a dominant second quarter represented the peak of its performance.

The Crimson scored 31 points in those 15 minutes. With the pass game and running attack both working, Harvard seemed to glide up and down the field at will.

Hempel used both his arm and his feet to make plays, connecting with a number of different receivers across the field and amassing a team-high 61 yards rushing in the half, including a two-yard touchdown scamper.

Harvard added to an already sizable lead in the closing moments of the half. After successfully executing a two-minute drill punctuated by a Stanton touchdown run, it seemed that Penn would head to the locker room down 24.

But with just 40 seconds left in the half, captain Josh Boyd picked off Penn quarterback Billy Ragone over the middle. Harvard needed just two plays to march 40 yards for another touchdown, and the score became 31-0.

“We had great play calls, a great gameplan,” Hempel said. “We were switching it up, and the defense didn’t really know what was coming at them. I think our line brought everything they had today, and it showed a lot up front.”

Hempel was 17-of-18 at the end of the first half, Harvard had 290 yards of offense to Penn’s 56, and it had been seven quarters since the Crimson defense had surrendered a point.

Despite Penn storming back in the final two quarters, 15 productive minutes gave the Crimson just enough to hold on.

At times in the second half, it seemed that the Harvard defense had stifled the Penn attack. But the Quakers repeatedly bailed themselves out of tough situations by converting on fourth down attempts.

In the third quarter, Penn converted a fourth-and-five and then a fourth-and-three the very next possession. Both of those drives resulted in touchdowns.

Harvard, on the other hand, was much more conservative. Up 16 points and faced with a fourth-and-inches in his own territory, Murphy elected to punt. While the Crimson did not go for a single fourth down all game, Penn converted on four out of five attempts.

“I’m thinking…we’re going to stop them,” Murphy said. “End of story. If you don’t believe, you go for it.”

Penn’s fourth down fortunes continued on its final drive of the game. Down just eight points and faced with a fourth-and-three, Becker’s pass deflected off his intended target directly into the hands of another receiver to move the chains. A few plays later with just over a minute remaining, a wideout hauled in another fourth down pass.

But the Crimson defense finally stopped the Quakers on fourth down with 27 seconds left when Boyd deflected a Becker pass. Once the ball hit the ground, Harvard fans could finally exhale safely.