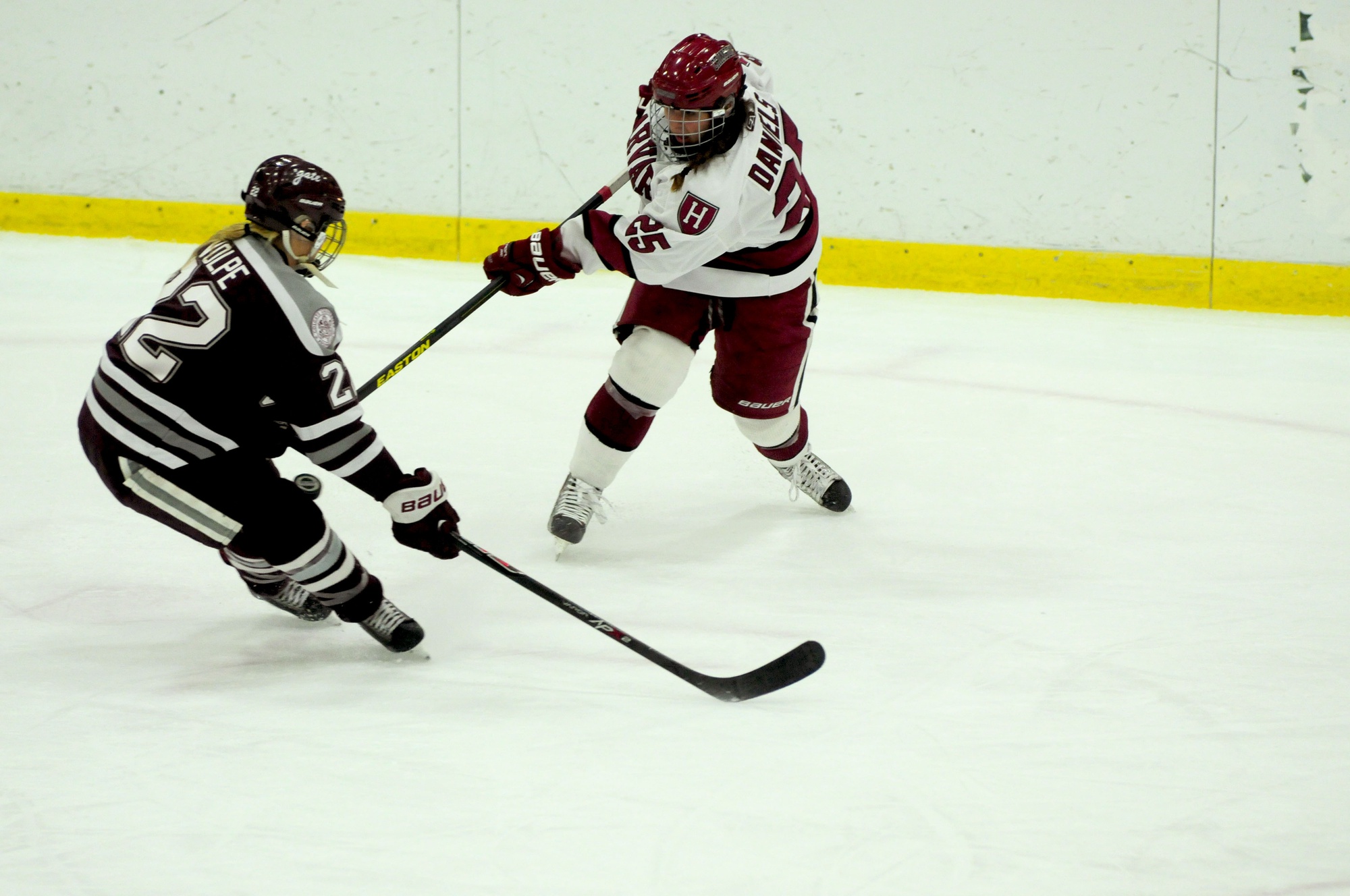 Freshman Sydney Daniels scored her third goal of the season late in the third period against Colgate, putting the finishing touches on a 2-0 victory.
By James Lim, Contributing Writer

As the No. 6 Harvard women’s ice hockey team stepped onto the Bright-Landry Hockey Center ice Saturday afternoon, it knew that the key to its game against Colgate would be to shake off the memories from the previous night’s game.

Less than 20 hours before, the Crimson allowed three goals to Cornell within a 14-minute span. As a result, what seemed to be a secure win against an ECAC and Ivy League rival ultimately ended in a 3-3 tie.

This time the opponent was Colgate, a team against which Harvard owned a dominant 22-1-2 all-time record, but the Crimson (6-1-1, 6-1-1 ECAC) struggled to find its own pace.

“It was a tough game for us, not our best,” Harvard coach Maura Crowell said. “I think [Friday] night definitely showed through in our energy level [Saturday].… The whole 60 minutes were a grind.”

In the absence of sustained momentum, newcomers stepped up to keep Harvard in the driver’s seat in a 2-0 win. Freshman goaltender Brianna Laing silenced a heated Colgate (3-11-0, 1-7-0 ECAC) offense in her first collegiate game.

“I was really looking forward to [the game] and tried to bring a positive attitude to it,” Laing said. “I just took it shot-by-shot rather than thinking about having to win.”

Laing’s approach proved to be effective as the rookie notched 21 saves en route to securing the 2-0 shutout, the team’s fourth shutout this season.

“I give Brianna a lot of credit,” Crowell said.  “She made some huge saves in her first game ever to get a shutout. It was a tight game and we were on the [penalty] kill quite a bit, so she stood tall and showed that she’s not just a backup goalie. She’s a very capable goalie and it’s good for us to know that defensively she can keep pucks out of the back of the net.”

While Laing spearheaded the Crimson’s defensive efforts, another freshman, defenseman Natasha Rachlin, put Harvard on the board first with a goal midway through the first period.

Following a scramble in the left corner, sophomore center Mary Parker emerged with the puck and connected with Rachlin, who was breaking down the right side. Rachlin took the pass and shot it past the Raiders’ goaltender Susan Allen for her first collegiate goal.

“I was really excited to score my first goal,” Rachlin said. “I love this team, and I am very happy to do what I can for it.”

Despite the early goal, the Crimson could not maintain its offensive pressure for long as Colgate brought renewed energy and intensity to the ice. Harvard was also hampered by seven penalties on the game, a season-high.

“I say it every time: we learn something from every game, whatever situation we are put in,” Crowell said. “[This game] was a grind. It was tough for us to get going at all.… We have to figure out how to play two games hard, no matter how short the bench is or [whomever] we play. Every team in our league is good and we have to be ready.”

The extended lead that Harvard sought all game long eventually came with just over three minutes left to play.

Junior defender Sarah Edney began a rush from the Harvard end, passing the puck to sophomore forward Miye D’Oench. D’Oench advanced deep into the Raiders’ territory, drawing Colgate goaltender Susan Allen and the Raiders defense towards her, then sent the puck towards freshman forward Sydney Daniels. Daniels, on a charge down the ice towards the net, nudged it in to give the Crimson a crucial 2-0 lead.

“I think the last 20 minutes [were especially significant],” Crowell said. “The last night we gave up three goals in the third period, and we definitely did not want to do that again. [The players] rallied around each other and found a way to get that goal to get us in a more comfortable position those last few minutes.”

With the win, Harvard extended an undefeated streak that dates back to its loss to RPI on Nov. 1, and sits in second place in the ECAC, just behind Cornell (8-0-2, 6-0-2 ECAC).

“I think we now know that we can do better,” Crowell said. “Practice, practice makes perfect. That’s where we will begin on Monday.”