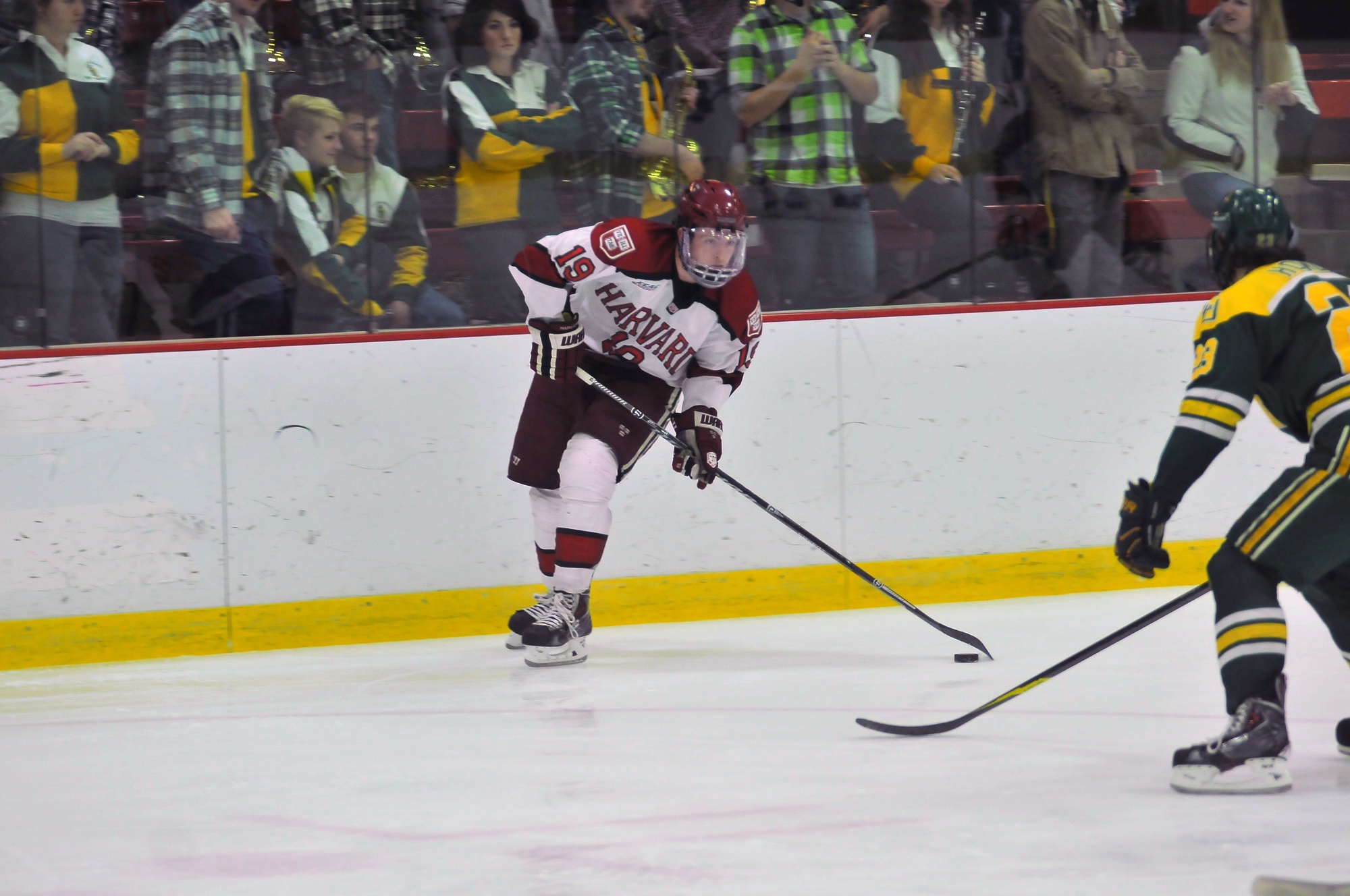 Sophomore forward Jimmy Vesey did it all for the men’s hockey team over the weekend. The Massachussetts native scored three goals and added another assist as the Crimson split its matches, losing to No. 6 Quinnipiac before beating Princeton 5-3 on the road.
By Michael D. Ledecky, Crimson Staff Writer

In the highly-anticipated return of junior defenders Patrick McNally and Max Everson, Crimson freshmen Sean Malone and Tyler Moy scored their first NCAA goals to help the visitors hold off Princeton, 5-3. Malone bookended the score sheet with his first two collegiate strikes, and Moy contributed a goal and two assists for his first three Harvard points.

Sophomore forwards Kyle Criscuolo and Jimmy Vesey also scored in the final frame to add to their team-leading offensive totals. The Crimson (3-4-1, 2-4-1 ECAC) bounced back from Friday’s 3-2 loss at No. 6 Quinnipiac to secure its first road win of the season.

“I thought that both games [this weekend] we really battled hard,” said Harvard coach Ted Donato ’91. “Last night we didn’t get rewarded. We could have easily walked away with a tie or win last night, so to get the win tonight is big and something we hope to build upon.”

While Saturday belonged to the freshmen, it was also a big night for three Harvard juniors. Exactly a year after withdrawing from school, the Crimson’s top defensive pair was back on the ice. In addition, junior goaltender Steve Michalek, who also withdrew last season, recorded his first win for Harvard in more than a year to improve to 1-2-1 on the season.

“Having Pat McNally and Max Everson in the lineup really helped us a lot here,” Moy said. “They’re two great players and they really add a lot to the team.”

McNally provided the Crimson blueline a new threat on offense, taking the puck coast-to-coast on occasion and putting three shots on Tiger goaltender Sean Bonar. Michalek was perfect through two periods and made 33 saves.

Goals from Moy, Criscuolo, and Vesey within two and a half minutes of each other gave the Crimson a 4-1 cushion midway through the third period. It would turn out to be just enough.

Center Aaron Kesselman brought the Tigers (2-7-0, 1-5-0) back within two off a quick strike in transition less than two minutes after Vesey’s goal, and Princeton crept within one with less than a minute left off a six-on-four power play goal by forward Tom Kroshus.

The Crimson would hold on for its second win of the ECAC season. An empty-netter from Malone with four seconds left sealed the deal for Harvard in its Ivy opener.

“I think we made it maybe a little more difficult than we needed to once we got that 4-1 lead,” Donato said. “But I think there were a lot of guys who played well and a lot of lessons that were learned with the win.”

Harvard controlled the pace early, and Malone put away his first goal of the night off a rebound from Vesey 13 minutes into the game. In the second, Michalek came up with the night’s biggest save on a penalty kill, stopping a point-blank shot from Tiger forward Michael Ambrosia in the slot before sliding to his left to make a sprawling glove save on a rebound opportunity by Kesselman.

“[Michalek] played unbelievabl[y],” Moy said. “He had a few glove saves during the game that were just jaw-dropping. It was great to see him stand on his head.”

A shorthanded Princeton goal tied things up early in the third. After the Crimson power play failed to convert on a 44-second two-man advantage, Tiger forward Tucker Brockett exited the box to set up teammate Aaron Ave on a successful two-on-zero breakaway.

But Harvard made sure that the home team’s momentum stopped there. Four minutes later, Moy capitalized on an errant pass from Princeton defender Jonathan Liau in the Tiger zone to put the Crimson back on top for good.

Criscuolo and Vesey each scored their fifth goals of the year in the next two and a half minutes to build a commanding 4-1 advantage.  Criscuolo received a feed from classmate Brian Hart to put one around Bonar in front of the crease. Vesey tapped in a power play goal after a wide slap shot from Moy bounced off the back boards and onto the sophomore’s stick.

“In the third period, I like how we bounced back,” Donato said. “We had several chances on the five-on-three to make it 2-0 and then they scored the shorthanded goal. It ended up being a pretty good test of our ability to handle adversity and our guys really responded.”