Clark and Mayopoulos Win UC Election But Will Resign

All Four Referenda Approved by Student Voters; UC May Elect President and VP at December Meeting 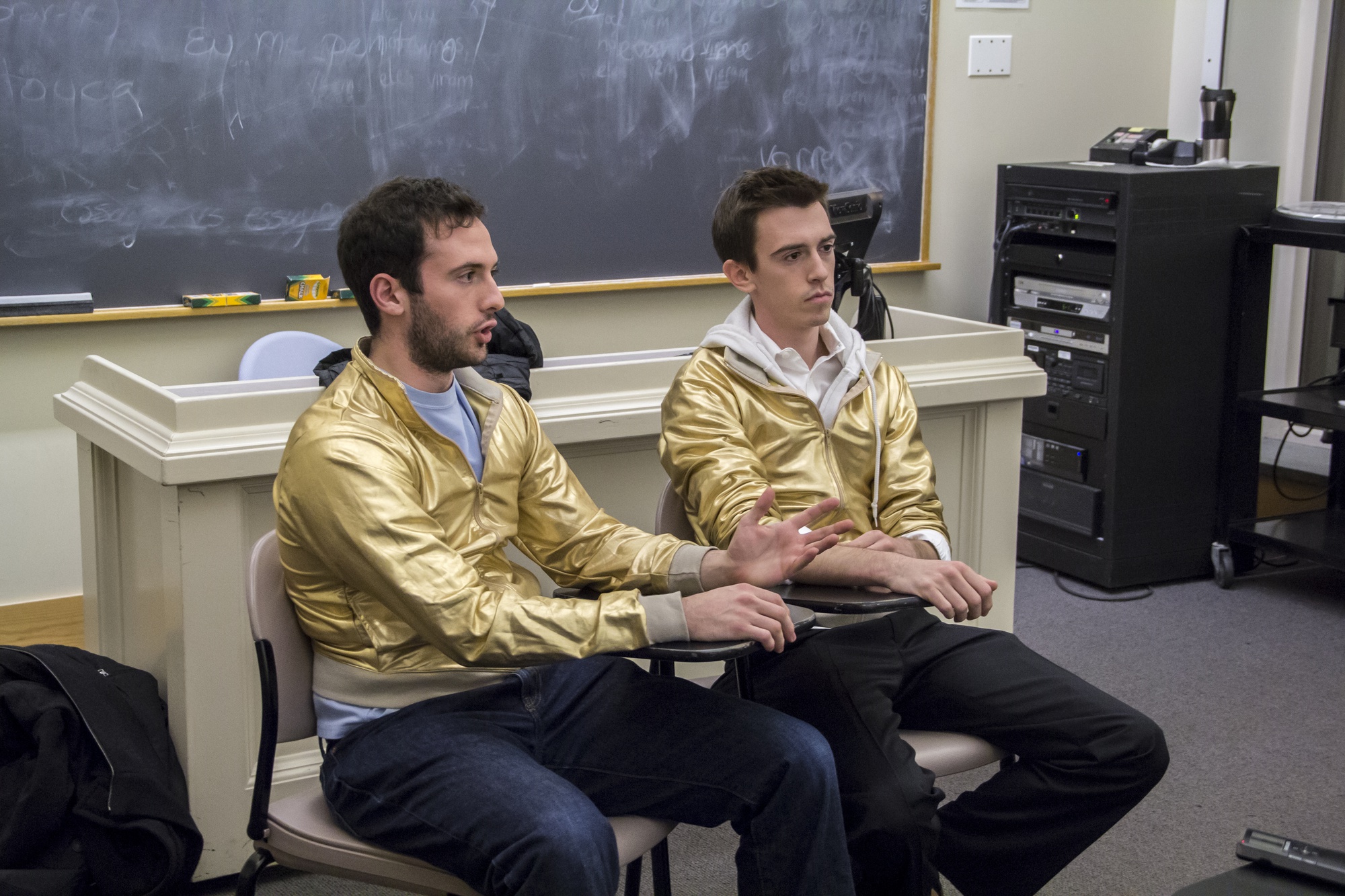 After winning the Undergraduate Council presidential election with a plurality of votes on Thursday night, Samuel B. Clark ’15 and Gus A. Mayopoulos ’15 said they will resign from their positions immediately after they are instated as UC president and vice president, respectively.

In a statement to the UC Election Commission provided to The Crimson, Clark and Mayopoulos confirmed that they will not serve as UC president and vice president.

"We technically can't yet, but as soon as we can, we hereby resign the offices of President and Vice-President of the Harvard Undergraduate Council," the statement read.

The resignation of both a UC president and vice president simultaneously is unprecedented in recent UC history. The last time a president or vice president resigned was in 2005, when UC Vice President Ian W. Nichols ’06 resigned halfway through his term.

In an email sent to two UC list-servs after Clark and Mayopoulos’s announcement, UC President Tara Raghuveer ’14 wrote that the Council will proceed with inauguration plans for Dec. 8. If either Clark or Mayopoulos refuse to be inaugurated or they are inaugurated and immediately resign, Raghuveer wrote that the UC will vote on the president and vice president positions in the same meeting, pursuant to Section 42.1 of the Council Bylaws.

Shortly after results were announced, both Gong and Nwokike said in interviews with The Crimson that the vote for Clark and Mayopoulos is going to be “a wake up call” for the UC.

“It really shows a lack of confidence with the Council and our efforts, and I really wish that wasn’t the case because we do do everything for the students,” Nwokike said.

Turnout in the election decreased by more than 400 votes from last year’s election, with 3,181 undergraduates, or almost 47 percent of the student body, casting a ballot.

Though traditionally the UC election has been conducted under the Hare-Clark voting system, in which students have been able to cast a ballot preferentially ranking all of the tickets, an inadvertent error by the UC Election Commission disallowed that option in violation of election rules. As a result, the Commission and all three tickets agreed to switch the counting system from the Hare-Clark voting system to a plurality system, given that the error was not caught until Monday night after voting had already begun.

Under the Hare-Clark voting system, if the number of first-place votes for a single ticket does not constitute a majority, then the ticket with the fewest number of first-place votes is dropped, and its votes are reapportioned to the remaining candidates based on second choices of those who ranked them first. Votes are transferred accordingly until a ticket emerges with a majority of total votes. Under the plurality system, however, the ticket with the most votes automatically wins.

Given the close margin of victory in this year’s election, it is mathematically possible that the outcome of the election could have been different had the Election Commission allowed voters to rank multiple preferences.

Throughout the campaign, Clark and Mayopoulos ran on a platform focused on making tomato basil ravioli soup available at all meals and increasing the thickness of toilet paper, emphasizing that their lack of experience on the UC made them more qualified for the positions.

Conversely, Gong, Goffard, Nwokike, and Kim have all spent time on the Council, with both tickets claiming to have the most experience.

Both insider tickets also had similar platforms, with each team promising to increase student group funding and improve engagement between the Council and the student body.

However, the endorsements from student organizations for Gong-Goffard greatly exceeded those of the other candidates, with the campaign garnering support from the Harvard College Democrats, the Harvard Republican Club, Queer Students and Allies, and the Chinese Students Association, among many others.

Gong expressed disappointment that these endorsements were not enough to put them over the edge.

“It saddens me to see that despite endorsements of so many student organizations and student leaders, students decided to vote for a ticket touting soup and toilet paper, when Sietse and I were trying to address student needs,” Gong said.

Gong and Goffard also maintained an extensive campaign network throughout the elections, self-reporting a team of 60 core supporters and more than 200 volunteers involved in publicity efforts. The Clark-Mayopoulos campaign had only a few more than a dozen students serving on its campaign, while Nwokike and Kim declined to comment on the size of their campaign.

But what Clark and Mayopoulos lacked in terms of campaign prowess, they made up for in social media outreach. By the time voting closed at noon on Thursday, their campaign Facebook page had more than 900 likes, 250 more page likes than for the other campaigns combined.

The Gong-Goffard campaign did not directly address the Clark-Mayopoulos campaign initially, but as the campaigning efforts intensified in the last few days of the election, emails from Gong and Goffard supporters increasingly referenced the integrity of the UC in light of the joke ticket’s satirical approach.

“The UC isn't a joke–please don't treat your vote as such. Satire can point out problems, but we'll provide solutions,” read one email from a Gong-Goffard supporter sent over the Quincy House email list on Tuesday.

In the second consecutive year that multiple referendum questions appeared on the UC presidential ballot, all four referenda passed with a majority of support from the students who voted in the election.

The referendum question asking Harvard to enroll in the UPASS program, a program in which Harvard would provide an MBTA pass for all students in exchange for a 50 percent discount from the MBTA, passed with 87 percent support, the highest percentage of approval of all the questions.

The referenda calling for gender-neutral housing across the College and the University endorsement of comprehensive immigration reform also passed with high support from 85 percent and 80 percent of voters, respectively.

The referendum asking the University to ban the sale and distribution of plastic water-bottles and make tap water more accessible, sponsored by the Environmental Action Committee, saw the most opposition, with only 64 percent of voters supporting the measure.

Environmental Action Committee Treasurer Alex G. Krolewski ’15 said in an interview after the release of the election results that he was happy that the referendum had passed and looks forward to the next stage of the movement.

“By the time we were doing the campaign, I wouldn’t say that we were expecting success, but given that the people we talked to seemed pretty receptive, we thought our chances were pretty good,” Krolewski said.

Although all four referendum questions garnered a majority percentage of support, the issues are non-binding on the UC because the majority of the student body did not vote.

Due to an editing error, an earlier version of the headline of this article and a breaking news bar circulating the article stated that Clark and Mayopoulos resigned immediately after winning the UC election. To clarify, they said they will resign.