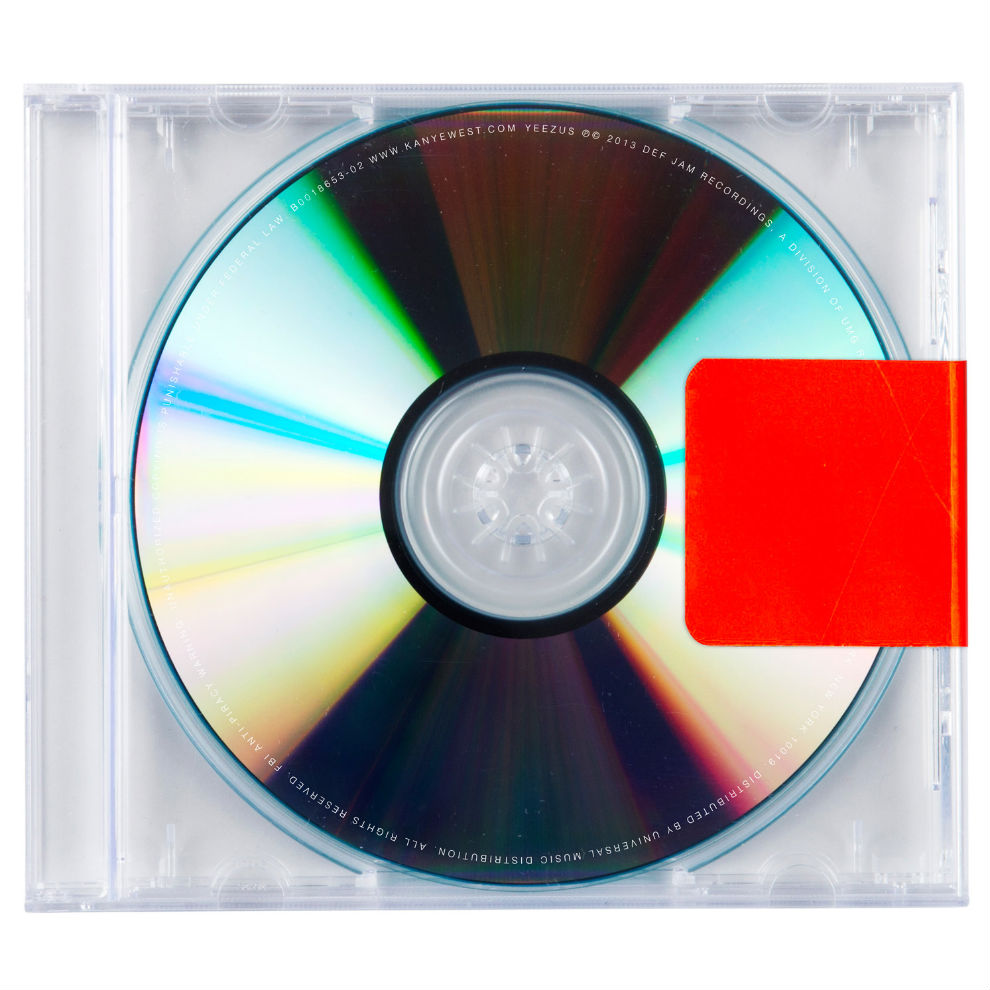 The Crimson Arts board discusses its favorite records of the year.

Do you remember your first love? It was easy, it came naturally, and it didn’t take much thought. You fell into it—and most likely, you fell out of it. The loves that last, the ones that shape us, are the ones that challenge us. They force us to look hard at ourselves, to compromise, and to grow. "Yeezus" is just that sort of love—the type that refuses to debase itself with pandering attempts at showmanship or shiny packaging. Its every surface is jagged and honed to a glittering edge, an ostentatious provocation to any listener willing to take it on, and beyond that wholly unwelcoming approach lies an album dripping with lethal intent. West’s anguish of the "808s and Heartbreak" era and the grandeur of his "My Beautiful Dark Twisted Fantasy" days are hardened and wielded here as sonic weapons against the complacent listeners of today. "Yeezus" is a dare, and for the bold, it is one so worth taking.—Alexander Tang

2. "The Bones of What You Believe," Chvrches

There are two ways to make big music. You can use dissonance and attitude (à la Sleigh Bells), or you can do the complete opposite. One might even call Chvrches’ instrumentation minimalist—"Bones" revolves around synthesizers, drum machine, and Lauren Mayberry’s vocals. But the sound universe occupied by the album seems to shatter every imaginable boundary—a glittering, cosmic world that occasionally sounds like Grimes, could be compared to Purity Ring, but ultimately finds its roots in traditional pop music. In fact, the album’s most memorable moment is also its poppiest—Mayberry quietly insists on "Tether," "I feel incapable of seeing the end / I feel incapable of saying it’s over," before her delicate a cappella suddenly gives way to a stunning deluge of synthesizers.—Se-Ho B. Kim

As an American, I understand the harsh reality of never being able to be royal, but that’s not the only reason why I love Lorde. She is not just a one-hit wonder; Lorde’s debut "Pure Heroine" is the album that just keeps on givin’. Her voice is angelic and chilling all at the same time: the hypnotic beat against the backdrop of her soulful hymns feel like a rallying cry in "Glory and Gore" as she challenges, "You could try and take us / But we’re the gladiators." From her disdain for the vacuousness of modern pop in "Team" ("I’m kind of over gettin’ told to throw my hands up in the air / So there") to her soft and smoky runs in "Tennis Court," Lorde is only that much more impressive considering that she’s only 17. She is wise beyond her years, with an album that is so self-aware and sultry that it knocks on the doors of pop powerhouses like Ellie Goulding while teaching a good lesson to pop stars who grind for dollars like Miley Cyrus. Lorde is making inspired pop music that can hit the club and your iPod while making you think twice about how we treat each other and—most importantly—ourselves.  —Lauren A. Rubin

Eight years after "Human After All," Daft Punk exploded back onto the dance music scene, though not in the way die-hard fans might have expected. "Random Access Memories" uncovered the smooth, seductive underbelly of the digitally inclined duo, proving that electronic music can have little to do with bleeps and bloops and everything to do with emotion and nostalgia. Between the joyful opener "Give Life Back To Music" and "Contact," a concluding track that begins thoughtful and builds to an anthem so intense it almost overwhelms, the French pair meditates on everything from the roots of electronica to the wistful thirst for alone time with someone who’s already taken. And, of course, they deliver the most exhilarated track of the summer in "Get Lucky." —Natalie T. Chang

The polo-clad pop quartet finally got real. That’s not to say Vampire Weekend have gotten boring—they’re still churning out grade-A pop songs and sprinkling their lyrics with references to everything from the Old Testament to OutKast."But "Modern Vampires" sees the band opening up emotionally in a way they never have. On "Step," Ezra Koenig struggles to separate growing up from getting old; on "Ya Hey," he has a conversation with God; and on "Finger Back" he spits words so rapid-fire you might not even notice that he’s talking about sectarian violence. "Modern Vampires" tackles the Big Questions of the musicians’ generation—namely, how to find meaning in a youth-obsessed society drowning in nostalgia. Yet, as we’ve come to expect from a VW album, it’s also impossible to take off repeat. Rest assured, the sweater’s still on—but now the gloves are off. —Matthew J. Watson

James Blake’s "Overgrown" isn’t a masterpiece, unlike his soulfully devastating self-titled debut of 2011. That being said, it’s still a fantastic album—one of which the best moments are also its most bizarre. "Voyeur" is a good example: the idea of Blake repeating "And her mind was on me" over the looped sound of a cowbell and synths reminiscent of air-raid sirens for three minutes may seem unappealing, but it turns out to be pure chaotic magic. As someone who thinks it would be a crime against humanity if Blake never produces a hip-hop album, I applaud him for letting RZA spit on "Take A Fall For Me," even if the outcome is less than wu-tacular. Finally, to make "Overgrown" even better, replace the original "Life Round Here" in your iTunes Library with Chance the Rapper’s version. You won’t regret it. —Will Holub-Moorman

"AM" is a rock album, and an efficient one. The dark, paranoid release, the fifth by the Sheffield group, fuses decades of rock history—from the Black Sabbath-versus-Black Keys doom of opener "Do I Wanna Know?" to the piano stomp of "Snap Out Of It," the psychedelics of "Why’d You Only Call Me When You’re High?" to the balladry of "No.1 Party Anthem." Frontman Alex Turner’s brooding lyricism puts desire and desperation at the bitter heart of the album, but the Monkeys’ studied intensity never loses a Britpop spunk. Turner’s wordplay is sharp, with tongue-twisters like "Tracy Island, time-traveling diamond" and a Scorsese pun on "Knee Socks." In the era of the declining rock and roll band, "AM" is a rock record both youthful and traditional. —Austin Siegemund-Broka

First off, let’s all just wipe "The 20/20 Experience—2 of 2" from our memories. JT’s second album of 2013 turned out to be a lazy collection of tired, monotonous dance tunes, but that does not take anything away from his true triumph this year. On "The 20/20 Experience," Timberlake gracefully balances artistry with accessibility—from the lush, Marvin Gaye-indebted champagne anthem "Suit & Tie" to the galloping bongos and crisp horns of "Let the Groove Get In." The album retains plenty of the vintage JT sound, and there’s also a bevy of old-school R&B touches that complement Timberlake’s ever-able falsetto. Here’s hoping a follow-up—and a real one, please—comes some time before 2020. —Tree A. Palmedo

Edward Sharpe & The Magnetic Zeros are back—with neo-hippie vibes radiating off their brows and bare toes tapping in time to chanted group choruses—and they’re ready to teach us all to love again. Critics largely panned the band’s self-titled album comparing their distinctly kitschy, clapping, love-is-all-around anthems unfavorably to classroom sing-a-longs. However, it is difficult to imagine anyone leading a group of six-years-olds in a rousing rendition of "Let’s Get High." The album is engineered to feel old and jangly—Edward Sharpe & The Magnetic Zeros seem dedicated to the premise that if a song sounds dusty enough, it will somehow become wise. It’s all in good (if oddly condescending) fun. —Sorrel L. Nielsen

Janelle Monáe has returned at long last. Her second full-length album "The Electric Lady" is the follow-up to her critically acclaimed "The ArchAndroid" (2010), both of which elaborate the slightly Afro-futuristic and always dystopian saga inaugurated by her 2007 debut EP "Metropolis: The Chase Suite." Whereas Monáe’s exceedingly brilliant previous efforts explored genres from punk rock to hip-hop, electro-pop to folk, and jazz to classical (and everywhere in between), "The Electric Lady" stands apart as an extended exercise in rhythm and blues, soul, funk, and all their variations. Monáe’s kaleidoscopic vision recasts classic African-American popular music, helped by icons Prince and Erykah Badu and R&B newcomers Miguel, Solange, and Esperanza Spalding. "The Electric Lady" is Monáe’s most stylistically cohesive work yet, as beautiful and thrilling as it is ambitious. —Nicholas T. Rinehart