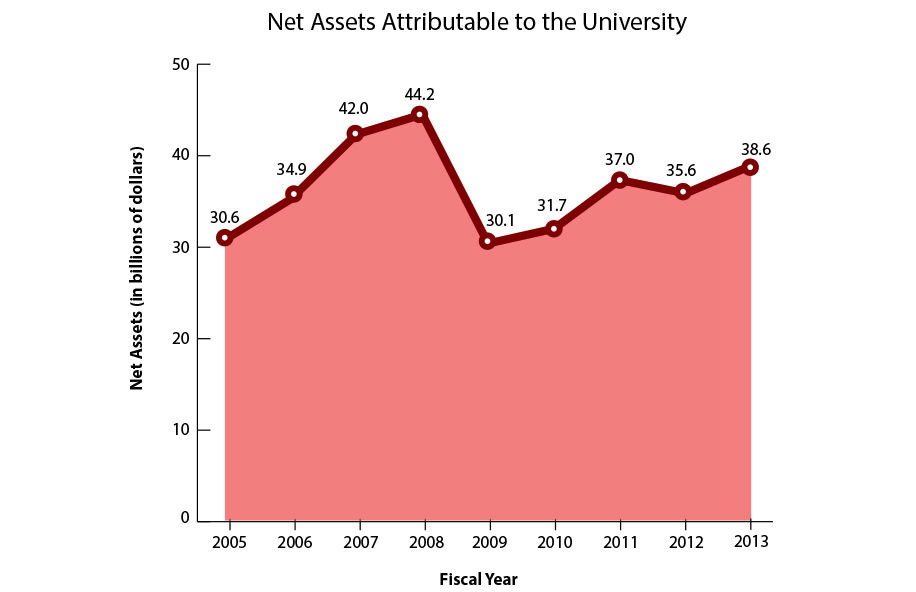 The University's net assets took a dip during the financial crisis before mounting a recovery in the past few years. By Caroline T. Zhang
By Matthew Q. Clarida, Crimson Staff Writer

Harvard’s financial report for the 2013 fiscal year, released by the University on Friday, paints a picture of a University that has recovered significantly from losses suffered during the recent financial crisis but is still looking with anticipation to the Harvard Campaign for relief, if not for a complete solution to all financial difficulties.

FY 2013 also saw the University experience growth in net assets of more than 8 percent, likely due, at least in part, to donations solicited during the “quiet phase” preceding the public launch of the Harvard Campaign. University President Drew G. Faust announced on September 21 that Harvard had, current of that date, raised $2.8 billion of the $6.5 billion it seeks in the fundraising drive.

Also in September, Harvard announced a strong endowment performance with an investment return rate of 11.3 percent and a total endowment of $32.7 billion, figures that were also reflected in the report.

But while Faust, in a letter accompanying Friday’s financial report, highlighted what she called “a year of renewal and advancement,” she presented a more cautious outlook looking forward. Though she wrote that the capital campaign will help the University continue and launch projects like a new home for the School of Engineering and Applied Sciences in Allston, advances in educational technology, continued support for financial aid, and other initiatives, she stressed that it will not solve all of the University’s financial difficulties.

“The campaign is not a panacea for the significant challenges that we face,” she wrote. “We will need to meet those challenges by acting thoughtfully and decisively as a community; we will adapt where circumstances demand it.”

Other data from the report showed that the University is still clearly recuperating from the heavy losses suffered in the financial crisis. After FY 2013, Harvard still holds $5.7 billion in debt, a figure that has not fully rebounded from the record $6.3 billion of debt the University reported for FY 2011.

“While we believe debt is an important enabler of growth, it currently constitutes an outsized portion of the University’s capital structure,” Shore and Rothenberg wrote.

The University’s financial health mirrors closely the financial situation in the Faculty of Arts and Sciences, Harvard’s largest faculty. Last month, FAS Dean Michael D. Smith and Dean for Administration and Finance Leslie A. Kirwan ‘79 released a similar report, writing that while FAS has recovered impressively since the financial crisis, there is more work to be done. They too wrote that the newly launched capital campaign will not solve all financial problems.

“The planning and preparation we have done during this period will ensure the Harvard Capital Campaign—while not a panacea—will directly address both academic priorities and financial pressures in the FAS,” Kirwan wrote in the October report.