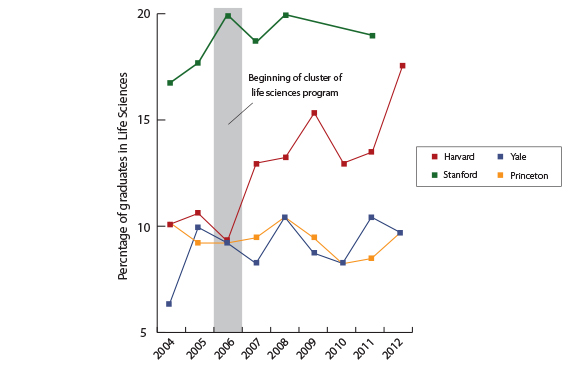 The percentage of graduates in the life sciences concentration has risen in the last decade and has experienced a sizeable increase when compared to peer institutions.
By Jessica A. Barzilay and Matthew Q. Clarida, Crimson Staff Writers

The number of biology concentrators at Harvard College has risen by 44 percent in the last decade, a sizeable increase when compared to Yale, Stanford, and Princeton, according to a review of the life sciences concentration cluster. The review was presented at the monthly meeting of the Faculty of Arts and Sciences Tuesday afternoon.

“This represents a cross-departmental discussion...within the life sciences that really got started in 2004,” chairman of the Board of Life Sciences Concentrations Robert A. Lue said of the review at Tuesday’s meeting.

In 2005, life sciences faculty also began implementing a new set of advising procedures and significantly reworking introductory courses such as Life Sciences 1a and Life Sciences 1b.

“Bio majors were always the least satisfied in [satisfaction] surveys [before 2006],” Lue said at the meeting. “The college has improved its student satisfaction ratings across a broad range...and Life Sciences is now in many parameters above the college.”

The review attributes the life sciences’ increased ratings to a number of factors, including the employment of Ph.D.-level advisors and more opportunities for research inside and outside the classroom. The number of life sciences concentrators who participate in research for credit has risen across all nine concentrations, and the number of thesis writers has also grown.

The establishment of foundational courses like Life Sciences 1a and Life Sciences 1b, whose enrollments have risen by more than 20 percent between the 2006-2007 and 2011-2012 academic years, also has contributed to greater interest among students, according to the review. Lue said at Tuesday’s meeting that the restructured foundational courses were meant to appeal to a wide range of undergraduates, including non-science concentrators.

“We decided that there was no difference, at the foundational level, of what a future life scientist needs and what a future poet needs,” Lue said.

The review was one of three docketed items at Tuesday’s meeting, which included a discussion of HarvardX led by Peter Bol, vice provost of advancements in learning. Perhaps the most timely business of the meeting—given the approaching exam period—came when Jay M. Harris, dean of undergraduate education, said that the median grade at Harvard College is A- and the most awarded mark is A.

—Staff writer Nicholas P. Fandos contributed to the reporting of this article.