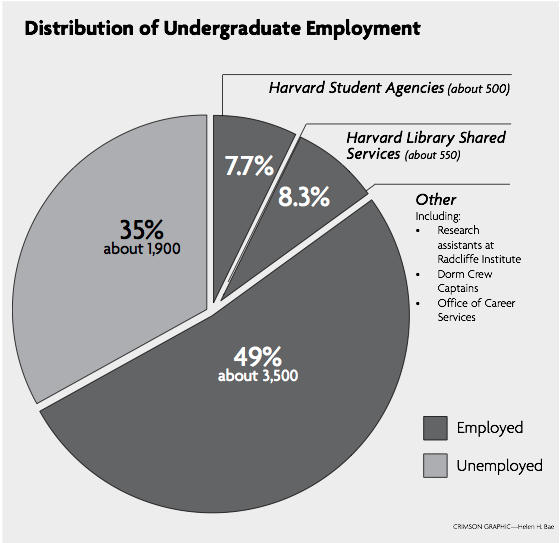 Whether they are working in the library, in cafes, or even with mops in strangers’ bathrooms, more than 65 percent of Harvard undergraduates are student employees—balancing academics, extracurriculars, and the additional responsibility of term-time employment.

Student-employment is a diverse and rich experience that, despite its challenges, offers both a paycheck and life skills. With positions ranging from a part-time bathroom custodian to the president of a multimillion-dollar company, student employees take away much more from their job than an estimated average pay of $11.50 an hour. Many students said that the experience in the workplace provides a crucial connection between the classroom and the real world, preparing them for life after college.

It may come as no surprise that most student-employees are primarily concerned with cold, hard cash. Office of Career Services Director Robin Mount said that most Harvard students who work during the academic year do so to earn money. Still, in recent years the increase in Harvard financial aid has led to a shift in the specific financial reasons students continue to sign up for work.

Harvard Student Agencies President Patrick S. Coats ’14 noted that many HSA student employees are using their paychecks differently than they did in the past.

“HSA was paying tuition 20 years ago,” he said. Today, many students use their paychecks for personal spending money.

Meg B. Swift ’93, the director of stu- dent employment, sees this as a positive trend.

“We’d love it if your job during term time pays for your trip to Pinocchio’s rather than billed expenses”, Swift said.

According to Swift, upperclassmen who receive financial aid are expected to contribute around $3,500 per year towards their billed expenses, which include tuition, books, and travel expenses. James R. M. Watkins ’16, for instance, said he has his job at the Lamont circulation desk as part of his financial aid plan but his paycheck is for “snacks and weekend spending money.”

Student employment can be a good way to keep the mini-fridge stocked. The limits for the Federal Work Study Program are $9.50-12.50 an hour, with some other jobs—both on and off-campus—paying even more, Swift said.

“On-campus jobs pay really well compared to jobs I’ve had in the past,” said Claire B. Fitzgerald ’14, an employee at Lamont Café.

While money is often cited as the reason for having term-time employment, student employees said that there are many other benefits. These range from learning responsibility to building self-esteem, Coats said.

“Managing work on top of school is definitely a useful thing to know how to do,” Fitzgerald said.

In fact, employers highly value these skills in the workforce, according to Mount.

“You definitely need to pick up work experience, whether it’s term-time or summer, unless you’re going to graduate school,” Mount said. “It doesn’t need to be paid, but in this competitive economy most employers really don’t want to teach you how to get up on time.”

Other students said that the benefits of working extend beyond professional benefits. Some said they find their jobs relaxing and enjoyable. For Tara Dankel, a student at the Harvard Graduate School of Arts and Sciences and the general manager of Café Gato Rojo, work offers a break from academic life.

“It’s a great counterbalance to school because it’s so social, and if there’s a problem I fix it, whereas the rest of the time I’m in the library,” she said.

Student managers also expressed enthusiasm about spending so much time at work. According to Alec D. Yeh ’14, the assistant manager at Cafe Gato Rojo, one of the best parts of his job has been the chance to be part of “a social space that’s so accepting, especially on a campus where we value exclusivity.”

Examples of the café’s willingness to mix individual interests with work include an employee-led push to stock local honey and the recent themed “drag day” at the cafe, which included costumed baristas.

Students are equally enthused by more professional aspects of their jobs. For Coats, as president of a company with a multimillion-dollar budget, the future job opportunities and alumni connections have been extremely valu- able parts of his experience.

“It’s really cool to have an endowment, a board of directors, and four spaces in Harvard square,” Coats added.

Despite all of the benefits of working a term time job, it also comes with many downsides.

“Time is Harvard students’ most precious commodity,” Mount said. Others echoed her sentiment.

According to Fitzgerald, balancing academics and employment can detract from her attention in either area. “There have been times where I wish I could work a little harder on a paper or study more for a midterm, but I had to be at work. It’s the same on the other side,” she said, adding that academics has interfered with her ability to focus completely on her job.

In addition to time management, there are other challenges that come with being invested in a job. For Coats, being a student manager in charge of about 500 employees comes with its share of stress. He and Yeh both said that there are unique challenges to dealing authoritatively with one’s peers.

Each place of employment has its unique set of challenges, especially when it comes to hiring. According to Yeh, students often come in with a lack of work experience. “We [as students] focused a lot on school when we were in high school,” he said. “It’s a steep learning curve learning how to work in customer service.”

At Café Gato Rojo, the constraints imposed by the Federal Work Study Program are also a source of frustration. The federal government is responsible for approximately 50 percent of student wages at the cafe, which helps keep costs down but also limits the applicant pool to a specific income bracket.

“It’s really negative for us because we spend a lot of time and resources training people and then they lose their work-study [eligibility],” Dankel said.

Watkins also noted the difficulty in scheduling work shifts in advance. “Because student plans are always changing, it’s tough locking down a compatible shift,” he said. Whether a student spends two or 25 hours working, employment does necessitate a certain time commitment.