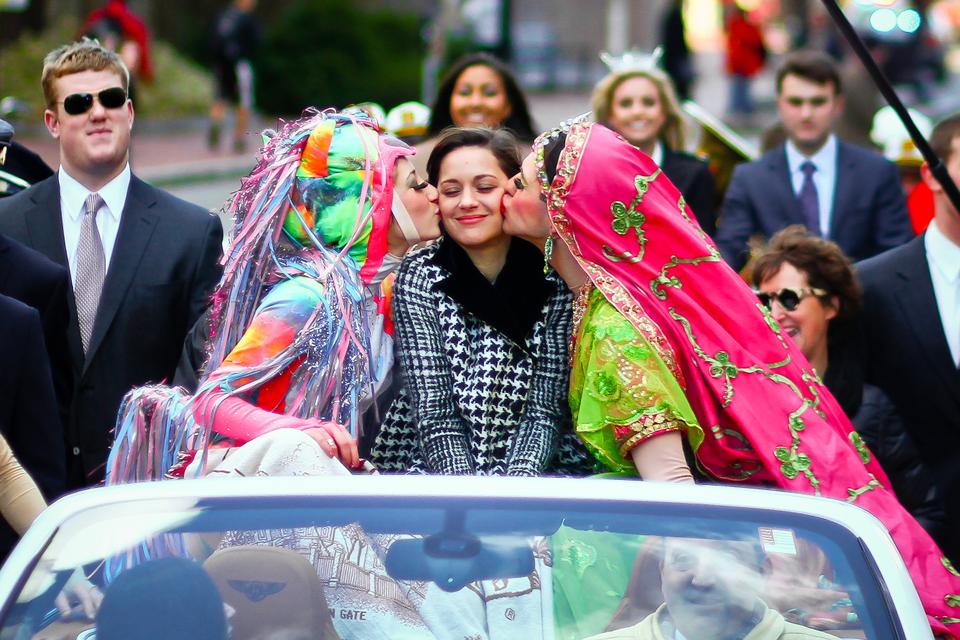 In a checkered jacket and with a bright smile, Marion Cotillard—this year’s Hasty Pudding Theatricals Woman of the Year—rode along with the organization’s cast in an annual celebratory parade Thursday.

Cotillard, an Academy Award-winning French actress known for her roles in “Inception” and in the biographical French film “La Vie En Rose,” joins an elite group of actresses who have won the award, including Elizabeth Taylor and Meryl Streep. Last year, Claire Danes received the honor.

Cotillard was nagged by the repetitive presence of a cast member portraying Leonardo DiCaprio, who kept reminding Cotillard that she was in a dream within a dream. Before she was presented her award, the Pudding Pot, Leonardo required Cotillard to perform tasks inspired by movies in which she has starred.

Her three tests included demonstrating how to act by reading monologues and performing a death scene, drawing a self portrait, and singing a song from “La Vie En Rose.”

When she had passed all tests, she was presented with her own golden Pudding Pot.

“I loved being roasted,” said Cotillard, who came to Boston for the first time to receive the award. “I had no idea what was going to happen, [but] knew it was going to be fun.”

Cotillard, who won an Academy Award for her performance in “La Vie En Rose” in 2007, said that she had no advice for this year’s nominees but that she was “totally in love with Jennifer Lawrence.”

“The experience is really amazing,” Cotillard said. “You have to have your own experience and just enjoy and have fun.”

Although the weather was cold and windy, J.P. Licks passed out free samples of ice cream as many people crowded around Mass. Ave to get a glimpse of Cotillard.

“It looked like the entire Cambridge police department was there,” Reylon A. Yount ’16 said. Yount said he enjoyed his first time witnessing a Woman of the Year parade, describing it as a “classic Harvard experience.”

The parade and roast drew alumni along with students and professors. Mark P. Szpak ’77, who was president of Hasty Pudding Theatricals when Elizabeth Taylor was named Woman of the Year, came back to see this year’s roast.

“There’s nothing like it anywhere in the U.S. or the world,” Szpak said.