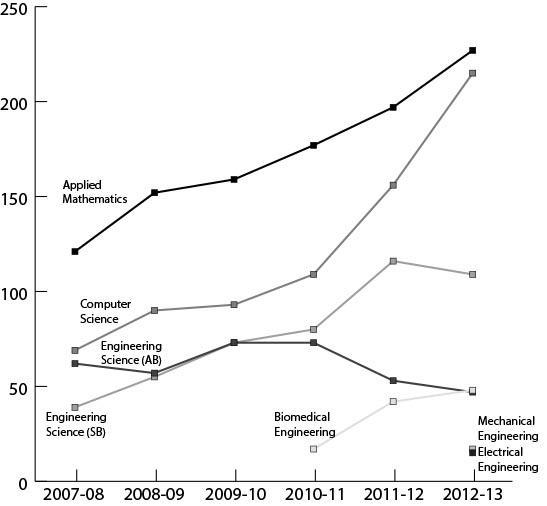 The computer science concentration has nearly doubled in size in the last two years and continues to drive growth in Harvard’s School of Engineering and Applied Sciences, according to new data released by the SEAS Communications Office.

Following sophomore concentration declarations last November, there were 215 computer science concentrators at the College, compared to 156 a year ago and 109 the year before. SEAS currently boasts 678 undergraduate concentrators, up 20 percent from last year.

“CS50 and David Malan have just been a great gateway for computer science,” Morrisett said. “Similarly, ES50 and other intro courses have made it easier and more fun for a broader range of students [to explore SEAS].”

Morrisett said that in addition to the increased number of SEAS concentrators, there has been extensive growth in the number of students taking SEAS classes.

“My class has maybe 40, 50 concentrators, but then there’s roughly 200 students who aren’t CS concentrators taking the class,” Morrisett said. “The reality is that for almost any field that you’re in now...you’re going to use computation.”

The numbers of students concentrating in applied mathematics and biomedical engineering grew in November to 227 and 48, marking increases of 15 percent and 14 percent, respectively.

David Campos ’15, who switched to the mechanical engineering concentration this semester, said that he thinks the new programs may foster further growth in SEAS by attracting engineering students.

“[The lack of a mechanical engineering concentration] was possibly the biggest thing that was pushing me away from choosing Harvard,” Campos said. “I think the addition of the new concentration is definitely going to open up the eyes of prospective students.”

While students and faculty see growth as a positive trend, they also recognize organizational challenges and difficulties in maintaining a close-knit classroom environment.

This year, CS51 has had to relocate eight of its 16 sections to classrooms in the Faculty of Arts and Sciences due to a lack of space in SEAS.

“This is somewhat problematic because most of the FAS rooms are not equipped with enough outlets [or] white boards to effectively teach CS sections,” assistant head teaching fellow Anna V. Gommerstadt ’13 wrote in an email.

Morrisett said that a growing teaching staff is also necessary to accommodate the increased enrollment in computer science classes.

“The most important thing [for dealing with growth] is being able to hire TFs,” Morrisett said. “That’s the only way we can expect courses like CS50 and CS51 to manage that growth.”

Most computer science classes draw heavily from undergraduates to fill teaching staff positions, Morrisett said. This year, CS51 is led by 16 undergraduate teaching fellows and a head teaching fellow who is a graduate student, according to the course website.

“While [growth] may seem from one perspective overwhelming, it also brings in a lot of people who could potentially help out with those classes,” said Kevin M. Schmid ’15, a current CS51 teaching fellow. “With the increased number of concentrators comes an increasing number of possible staff members.”