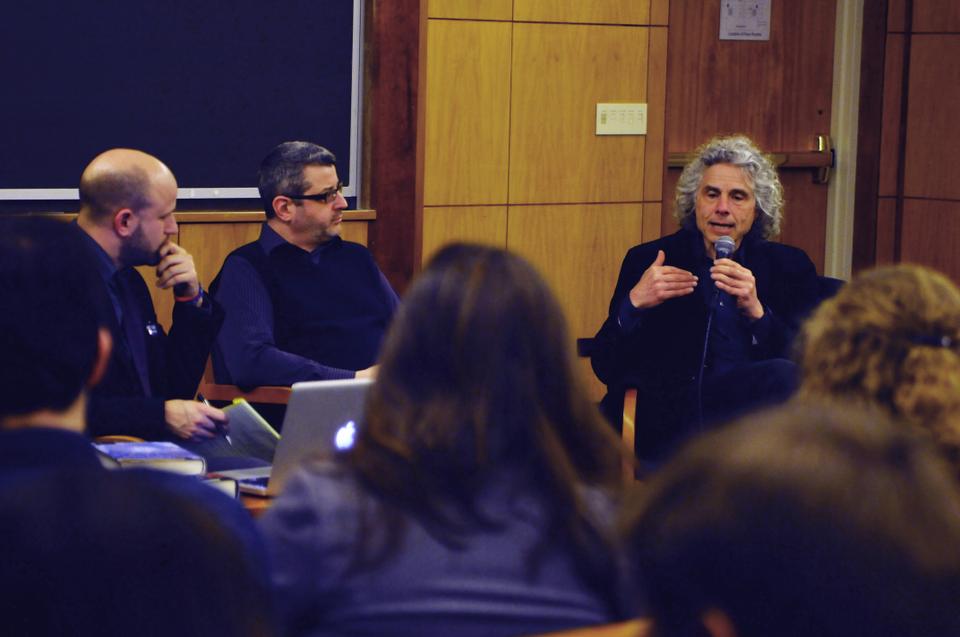 Students and community members gathered in Lamont Forum Room on Monday evening for an open discussion on atheism. The panel event “Why Atheism Matters” was the kick-off for “Atheist Coming Out Week.”

The Harvard Community for Humanists, Atheists, and Agnostics planned the event and others which will happen this week with the goal of helping Harvard students who do not believe in God “drop the A word,” according to Sarah E. Coughlon ’15, HCHAA Vice President of Outreach. HCHAA President Elliot A. Wilson ’15 noted that the label “atheist” is associated with considerable stigma.

“HCHAA sees Atheist Coming Out Week as an opportunity for nonreligious people on campus to feel safe asserting their identity, and it’s also a chance to destigmatize a word that, even on a secular college campus, can leave a bitter taste in people’s mouths,” Wilson wrote in an email.

To start off the event, Coughlon encouraged attendees to sign a “Coming Out” banner, take a pin labeled “Got Soul? Me Neither,” and read the “We are Atheists, and So Can You!” editorial published online in The Crimson on Monday.

After Epstein introduced the panelists, Pinker recounted his own experience “coming out” as an atheist. As he said, “I felt like I was confessing to murder. Since then, I have gotten completely used to it.”

According to Pinker, the term “atheist” is a misnomer because “you don’t define yourself by the [ideas] you don’t believe in.”

Pinker also expressed the idea that atheists do not need to compete with other religions. According to Pinker, many developments and institutions such as jazz music, the Constitution, and Harvard University have been the product of secular or humanist goals.

“One of the biggest advantages of being atheist is getting to sleep in on Sunday mornings. Who wants to give that up?” Pinker jokingly concluded.

Many students felt that the event was a great opportunity to reflect on their religious identities and conceptions of atheism.

“Concerning my stance on religion, I have been wrestling with a large number of conflicting feelings as of late. I felt that the secular perspective is frequently suppressed—stigmatized even,” said attendee Justin D. Porter ’16, “This event gave me a guilt-free avenue to explore the realistic possibility that I may be an atheist.”