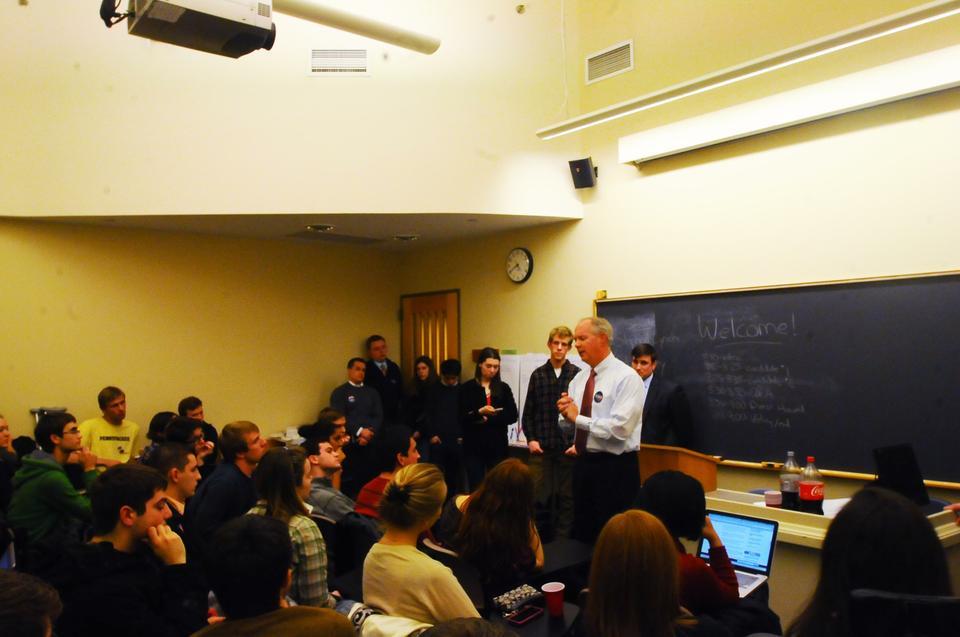 Mayor Joseph Sullivan addresses questions about Democratic US Senate candidate Stephen Lynch at a Harvard College Democrats meeting. Representative Carl Sciortino also spoke as a representative of the Ed Markey campaign at the meeting on Tuesday evening, during which attendees voted on the endorsement of a candidate.
By Matthew Q. Clarida, Crimson Staff Writer

The Harvard College Democrats, which has not endorsed a candidate in a primary since at least the last five years, broke the tradition Tuesday night, voting 36-1 to support U.S. Rep. Edward J. Markey of Medford in his race against U.S. Rep. Stephen F. Lynch of South Boston. The two men are seeking the Democratic nomination for the U.S. Senate seat vacated earlier this month by Secretary of State John F. Kerry.

Also at the meeting, the Dems voted, 28-8, to support Divest Harvard, an initiative that calls on the University to withdraw endowment investments from fossil fuel corporations.

Markey seemed to have the endorsement even before the speeches began. Many in the crowd sported “MARKEY FOR SENATE” stickers as they listened to the campaigns’ positions. As the votes were being tallied, members organized support efforts for Markey.

“Maybe they’ll just count the Lynch votes, then subtract them from the total to get the Markey count,” said Dems member Alice F. Hyde ’16 before the meeting began. “That might make things quicker.”

When it came time for the speakers to take the floor, State Rep. Carl Sciortino, speaking for Markey, struck a chord with the crowd. He repeatedly referred to Markey’s progressive stances on climate change, abortion, and LGBTQ rights.

Sciortino praised the Harvard Dems for their successful support of Senator Elizabeth Warren in her campaign last November.

“If you look back at the last couple of election cycles, and what this group at Harvard did, wow,” Sciortino said.

“We think [Markey’s] been a fine congressman, and we’d like to keep him there,” Sullivan told the crowd.

Though he earned appreciative laughs and attention from the crowd, Sullivan was unable to downplay Lynch’s historically conservative record on social issues. In particular, his portrayal of Lynch as holding a pro-choice position on abortion was questioned more than once during the brief question and answer period following Sullivan’s remarks.

“I think that [Markey] and his positions speak well to the progressive views of college students today,” Thompson said.