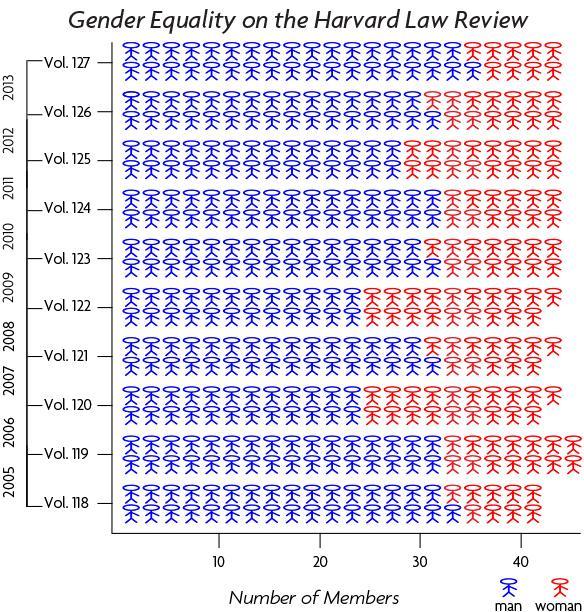 The most recently elected board of the Harvard Law Review had only 9 female editors, a low number even considering the historical gender imbalance.
By Dev A. Patel, Crimson Staff Writer

The Harvard Law Review, which has historically been staffed by disproportionately more men than women, has expanded its affirmative action policy to include gender as a criteria in its editor selection process.

Following a year in which just 20.5 percent of its elected editors were female, the Law Review will consider gender when choosing some of its applicants for the first time ever this year.

Second-year Law School student Gillian S. Grossman ’10, the recently elected president of the Law Review who will lead the organization’s 127th volume, wrote in an email that the policy change was among many considered to “enhance the diversity of the editorial body.”

“Volume 127 decided that adding gender to the list of criteria considered by the discretionary committee was one good step in that direction,” she wrote.

The changed affirmative action policy was one of several initiatives passed by second-year editors last month in preparation for taking over the leadership of the Law Review. The editors also approved a change that will add two more students to this year’s pool of rising editors—increasing its size from 44 to 46—in the upcoming application process.

The Law Review, whose total staff is currently 25 percent female, selects new editors using three distinct application processes. Of the 44 editors elected in recent years, 20 are anonymously selected based solely on their performance on an annual writing test administered to first-year law students after their semester ends in May. An additional 14 editors are chosen based on a combination of their writing scores and their grades.

The remaining 10 spots are filled by a discretionary committee that incorporates applicants’ grades, writing test scores, race, and any physical disabilities into their decisions.

But this year, the discretionary committee will fill 12 spots and consider gender in addition to its existing criteria.

The first group of applicants to be elected under this changed policy will be the editors of the 128th volume, who will be selected over the summer.

Grossman wrote that it remains to be seen how effective this policy will be in increasing the percentage of female editors.

“Because the Law Review has not yet started the selection process for Volume 128, it’s too soon to tell what impact the policy will have,” Grossman wrote. “As a historical matter, the Law Review has tended to have a higher percentage of female editors than does Volume 127, so it is not unlikely that we would see an increase in the number of female editors in the next volume regardless of this policy, though of course we cannot know for certain.”

The Law Review’s new policy comes in the midst of a national debate over race-based affirmative action in college admissions, an issue on which the Supreme Court is expected to rule this June.