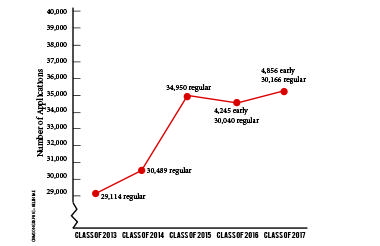 Harvard College received a record 35,022 applications for the class of 2017, 719 more than last year, the University announced early Friday morning.

Although the 2 percent increase represents the first time ever that Harvard’s application numbers have broken the 35,000 mark, Dean of Admissions and Financial Aid William R. Fitzsimmons ’67 called this year’s numbers “a continuity.”

“We’ve had really about the same number of applications for three years now,” Fitzsimmons said. “From year to year it can almost be noise in the system when you have a small increase or a small decrease.”

The College reaches out to potential applicants in a number of ways. Using the College Board’s Student Search Service, Harvard writes to thousands of high school students every year. Admissions officers spend months traveling both internationally and to over 120 American cities to encourage people to apply.

“Really over the past decade or so, we’ve had a very steady outreach,” Fitzsimmons said.

According to Director of Admissions Marlyn E. McGrath ’70-’73, the demographic makeup of applicant pool to the Class of 2017 is similar to that of previous years. Following two years when Harvard’s computer science concentration has nearly doubled in size, this year’s applicant pool saw a “26 percent increase in prospective computer scientists,” McGrath said in a press release.

Fitzsimmons said that although the exact number of applicants may fluctuate from year to year, the admissions office prioritizes ensuring “that we reach, one way or the other, all of the people who have a chance of getting in.”

“Our theory is not to focus on the number of applications, but to make sure that the quality and diversity, often the very same thing, of the pool is robust every year,” he said.

According to Harvard College Director of Financial Aid Sarah C. Donahue, this year’s applicants demonstrated a greater level of economic diversity than those of year’s past, with 37 percent more students requesting that the application fee be waived—a figure that she said in a press release indicates “more applicants from low- and modest-income backgrounds.”

Thus far, the College has already accepted 895 students from an early applicant pool of 4,856 people. Those accepted to the Class of 2017 in the fall represent the second group to be admitted early since the University reinstated its early action program in 2011.