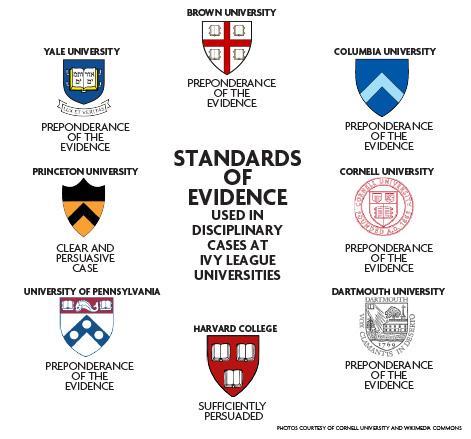 To some, the “preponderance of the evidence” standard is “crucial to the fair and equal treatment of women.” To others, it is a “fatally flawed” path to “injustice” that erodes the rights of students.

In recent months, an expired piece of legislation has placed a few words of legal jargon, tucked away in the disciplinary codes of colleges and universities all over the country, at the forefront of a polarizing national debate. The argument centers around a charged question: how much evidence should an institution of higher education require to find an accused student guilty of sexual misconduct?

The preponderance of the evidence standard might not mean much to the average American, but to many of the activists watching Congress debate the reauthorization of the Violence Against Women Act, it is a pivot point for the future of America’s universities. Those four words have been caught in the middle of a months-long battle to renew the legislation, which contains new provisions that explicitly regulate the sexual assault investigations conducted by institutions of higher education.

An early draft of VAWA contained language which would have mandated colleges and universities to adopt the standard, which would make it easier to discipline students accused of sexual misconduct. But last week, the U.S. Senate approved a version of VAWA that dropped the clause entirely. The Senate’s bill must still be reconciled with a rival version in the House of Representatives before it can be signed into law by President Barack Obama.

For schools like Harvard, which do not use the preponderance of the evidence standard, the Senate’s bill offers a momentary reprieve from external pressure to adopt a lower burden of proof. But even though it does not legally require Harvard to alter its standard of evidence, the bill still leaves the door open for federally mandated changes in the way the Administrative Board handles cases of sexual assault.

Drafted in 1994 by then-senator Joe Biden, VAWA allocated federal funds to help streamline the investigation and prosecution of violent crimes against both men and women.

The act was reauthorized in 2000 and 2005 with bipartisan support, but hit a snag when it was considered for renewal in 2012. House Republicans objected to new provisions that extended parts of the legislation to Indian reservations and undocumented immigrants. Ultimately, differences between the versions of the bill drafted by the Democrat-controlled Senate and the Republican House prevented the legislation from being renewed before 2013.

At the same time, a separate debate raged over new portions of the bill that concerned sexual assault on college campuses. An early draft of VAWA incorporated much of the language of the Campus SaVE Act, a bill that Pennsylvania Senator Bob Casey introduced in 2011 to reduce sexual violence on college campuses. Among other changes, the bill would have mandated that colleges and universities adopt the preponderance of the evidence metric when investigating sexual assault cases.

The standard, which is also the legal burden of proof used in U.S. civil courts, would require that a university’s disciplinary body be at least 51 percent convinced of a student’s guilt before meting out a punishment for a sexual offence. Compared to the “beyond a reasonable doubt” standard used in criminal courts that deal with sexual assault, a preponderance of the evidence rule requires less certainty.

Currently, Harvard has no standardized burden of proof for disciplinary proceedings across its various schools. The Law School uses the more stringent “clear and convincing evidence” standard—typically considered to require about 80 percent certainty of guilt—and the Faculty of Arts and Sciences mandates that the members of the Administrative Board be “sufficiently persuaded” of an accused student’s guilt before assigning a punishment.

While the Law School’s standard has been criticized for making it difficult for victims to attain justice, the Faculty of Arts and Sciences’ standard has come under fire for being too vague.

“I think it’s very unclear what ‘sufficiently persuaded’ means,” said Kristi L. Jobson ’06, a law clerk at the Massachusetts Appeals Court. “It could be lower than preponderance of evidence or higher than that. We just don’t know.”

In the Ivy League, only Harvard and Princeton do not use the preponderance of the evidence standard. Princeton employs a “clear and persuasive” standard.

In fall of 2011, Yale announced that it would adopt the lower standard after the Department of Education’s Office for Civil Rights launched a 15-month investigation of the university for alleged violations of Title IX.

Last June, Harvard’s Secretary of the Administrative Board John “Jay” L. Ellison said that Harvard did not have plans to change its sexual assault policies in response to Yale’s move.

When asked for comment on the Senate’s VAWA bill, a Harvard spokesperson revealed that the University has hired a Title IX coordinator to oversee compliance with the law across Harvard’s schools.

“We think we have some strong policies and processes in place at Harvard. That said, we are continually reviewing our practices and we are always open to refinements,” Faculty of Arts and Sciences spokesperson Jeff Neal wrote in an email. “Going forward, we are continuing to think hard about these issues, which we know are of such importance to students.”

Although the current text of the VAWA bill would not require Harvard to change its standard of evidence, the University may still face pressure to change its procedures in compliance with Title IX of the Education Amendments of 1972, which requires schools receiving federal funding to implement sexual assault policies that promote “equal access” to education for women.

In April 2011, the Office for Civil Rights sent out a “Dear Colleague” letter to colleges and universities, recommending that schools that receive federal funding use the preponderance of the evidence standard in their grievance procedures in order to remain in compliance with Title IX.

But the letter—which the Department of Education calls a “significant guidance document”—is neither a regulation nor a mandate which schools are legally required to follow. Still, schools that refuse to adopt the new standards risk a formal investigation of Title IX compliance by the Office for Civil Rights, which could result in the loss of federal funding.

S. Daniel Carter, a campus safety advocate who helped lobby for the Campus SaVE Act, said that the Senate’s VAWA bill “neither affirms nor undermines” the preponderance of the evidence standard as promoted by the Office for Civil Rights.

“We do not believe that the VAWA reauthorization is structured in a way that will undermine Title IX,” said Carter, who works for the VTV Family Outreach Foundation, a nonprofit group that pushed for the revised version of the act.

Carter added that the “substantive essence” of the bill remained intact, even though the preponderance of evidence clause had been removed.

But Wendy Murphy, a law professor at the New England School of Law who filed a 2011 Title IX complaint against Harvard Law School that is currently being investigated by the Office for Civil Rights, expressed concerns about the revised VAWA’s impact on the OCR’s “Dear Colleague” letter. Since VAWA does not explicitly codify the preponderance of evidence standard, she said, schools might point to the bill as proof that the lower standard is not required by federal law.

Still, Murphy said, “It’s better to have nothing in place than to codify a higher standard.”

Even the detractors of the “preponderance of evidence” benchmark agree that the new law will push universities towards the less stringent standard.

“Even if that standard is not codified in federal law, it’s being promulgated by a federal regulatory agency, and many schools will probably start to abide by it,” said Wendy Kaminer, a lawyer who has spoken out against the act.